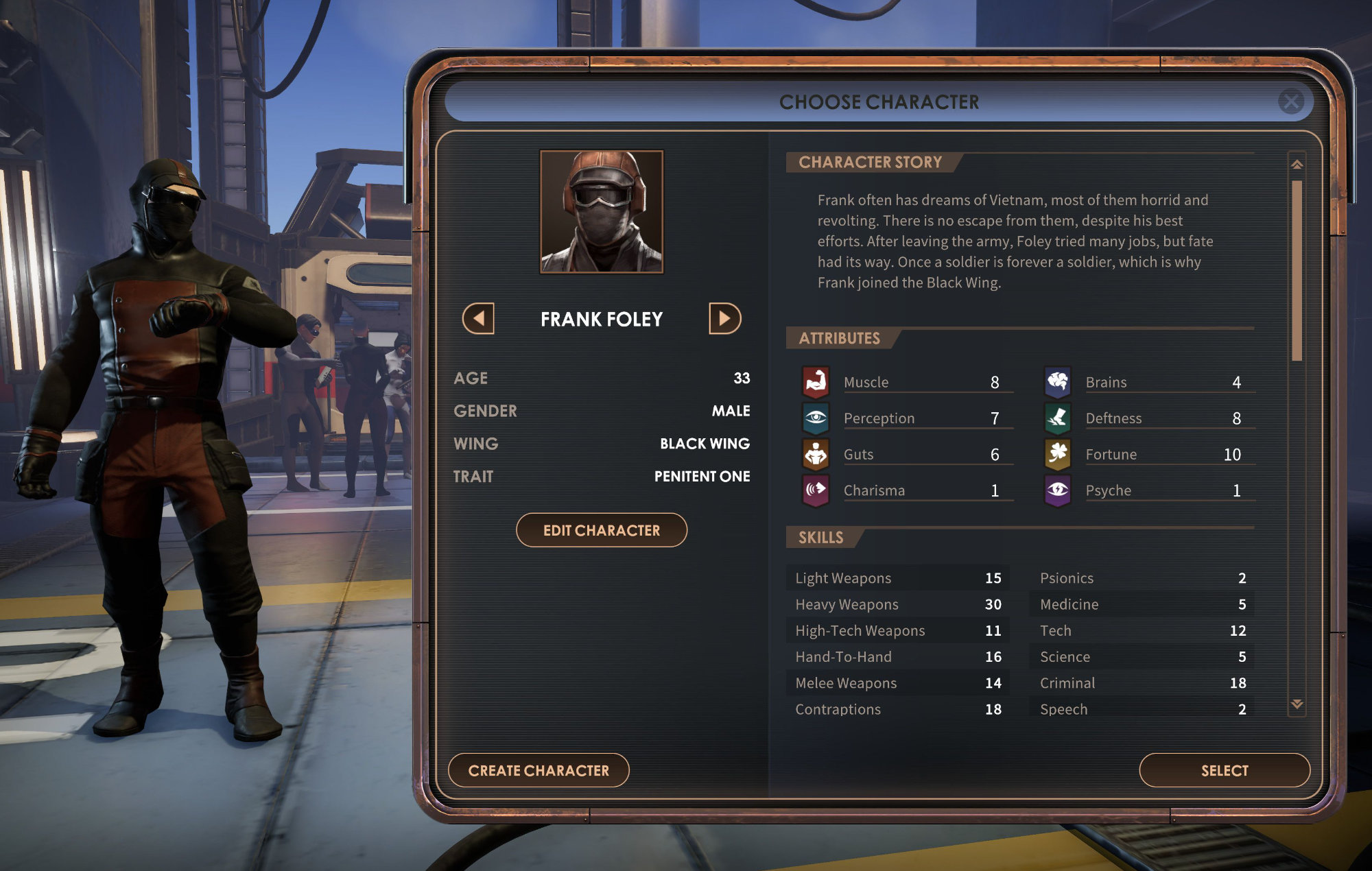 In Encased, the appearance of a mysterious semi-permeable dome – anything can enter, but nothing living can ever leave again – has lead to a growing population of workers toiling away inside, excavating its secrets for the world outside.

Life imitates art – following Encased‘s successful Kickstarter campaign in 2018 and an Early Access launch on Steam in 2019, developer Dark Crystal Games has been labouring largely out of sight but is now gearing up to send the game out of the dome for the benefit of the wider world.

Those who will most benefit are fans of old-school PC RPGs – those deep and elaborate experiences that cram in several novels’ worth of text alongside intricate combat and skill systems, branching narratives, and complex chains of cause and effect based on player choice, all housed in top-down isometric view environments. Think classic Fallout or Planescape: Torment, or more recently the likes of Torment: Tides of Numenera.

However, while much of its inspiration opts for apocalyptic end of days scenarios, Encased leans more into an imaginative alternate history approach to science fiction. The sudden appearance of the dome in the 1970s leads to nations uniting to investigate it, creating the CRONUS Corporation to manage and explore the strange landscape within. That’s where you come in – as the newest worker given the (dubious) prestige of entering the dome, you’ll play a major role in shaping the isolated society and uncovering its mysteries.

While Encased‘s gaming influences are fairly obvious, the tone is unexpectedly closer to Valve‘s Portal series. The world here is similarly retro-futuristic, albeit hinged on a 1970s aesthetic rather than the 1950s vibe of Portal‘s brand of weird science. It’s a mix of high and low tech – incredibly advanced artifacts discovered in the dome, the product of the speculated ‘Forefathers’ that may have created it, sit alongside filament lightbulbs and period weaponry.

The result is something that casts a sideways glance at what humanity thought the future would be like when judged not from the glittering optimism of the Atomic Age, but instead the grim cynicism of the Cold War. CRONUS and its culture is born of a sort of proto-cyberpunk wave, when people were more aggrieved with governments and before the 1980s gave rise to unbridled corporate power, unaware of the corruption that laid ahead.

Encased brilliantly taps into this, adapting the conventions of RPG gameplay into a corporate structure. Instead of character classes, you’ll choose a corporate Wing to work under – Silver are corporate elites, the management tier; White are scientists and researchers; Blue are engineers and builders; Black are security and military; Orange are grunts and labourers, gathered from convicts and the downtrodden of the outside world.

Given CRONUS governs every facet of life under the dome, it soon becomes clear that these Wings have become social castes, too. Other characters and even the omnipresent narration refer to people by their Wing – “the Silver sneered”, “the Orange looked warily at you” – and certain dialogue options will be locked out if you’re not of, or talking to, the ‘right’ group. It’s a clever, if dark, bit of social commentary.

Interestingly though, you have considerable flexibility in how you build your character, even within your chosen Wing. There are a handful of pre-arranged characters to choose from, but you can also create from scratch and assign your skill points and attributes as you like. For this preview, we opted for a relatively stable Blue, liking the sound of the weapons and tech specialisations, but swapped a few points around to boost charisma and a few other non-standard skills. You’ll also have to pick a Trait – an attribute that offers a unique skill but nearly always with a negative trade-off effect attached such as doing more damage in a fight but being dazed afterwards.

Stepping into the world of Encased might be slightly daunting though, particularly to players not familiar with the genre. Torrents of information crash upon you in rapid succession, and even getting through the opening training session requires wading through walls of text and finding the right people to speak to, scattered around a sprawling welcoming station for new arrivals in the dome. The deeper you go, the more there is to juggle, with a host of highly specific status effects – a healing pod can remove radiation and radiation sickness, for instance – and dozens of attributes and perks to learn.

While it’s all very dense, it’s not impenetrable – excellent voice acting makes the world and its population feel more alive and less sterile, while every instance of jargon in the text can be hovered over for a full explanation. It’s rapidly absorbing, drawing players into this strange territory.

Where Encased really wants to shine though is in its combat, a blend of turn-based and tactical mechanics that packs in a lot of nuance. We say “wants to” because, while there’s clearly a lot of potential here, it feels like a lot of its best qualities won’t become apparent until you’ve levelled up a bit and unlocked more interesting skills, such as psionic abilities afforded by the paranormal environment of the dome. Every encounter we had was a round of exchanging shots with ranged enemies or using the ability to move around the map to dodge up-close foes, such as irradiated wildlife. Tactics came mostly from positioning, moving to higher ground for vantage shots or taking cover out of enemies’ line of sight.

Luckily, experience is earned from just about anything, whether it’s following the tasks your day job requires, to successfully searching containers, or – given CRONUS’ raison d’être is to uncover the relics hidden under the dome – scanning objects you discover when out on the surface. It’s easy enough to squirrel yourself away and build experience through your character’s day to day grind, before moving deeper into the combat. While that may frustrate more action-oriented players, the beauty of Encased is that a different character build – a Black Wing agent with all their stats ploughed into heavy arms and combat, perhaps – might have an entirely different experience, with better, more involved battles coming earlier on.

Releasing a game through Early Access can be awkward. There can often be a sense as a player that you’re wasting time on an unfinished product, especially for lengthy RPGs, and even more so when they’re as deep and complex as Encased. However, even if later patches and updates drastically overhaul elements of the game, there’s enough variety here to justify multiple playthroughs, even in its current form – simply experimenting with the different Wings will open up significantly different options, and Dark Crystal Games says there’s a “unique walkthrough” for a character with only one point of intelligence, which sounds an interesting route to take on subsequent plays.

There are minor tweaks that could improve the overall experience – the UI, in particular, feels cluttered, with the main dialogue box obscuring the area where quest update notifications appear, leaving you to scramble through your log to figure out what’s happened. Similarly, movement and camera controls feel slightly clunky and could do with a polish. But after two years as an Early Access title, Encased now feels dangerously close to a final experience, one that fans of retro PC RPGs will likely be all to happy to get lost in.

Encased is available for PC via Steam Early Access now, with full release to follow in Autumn 2021.