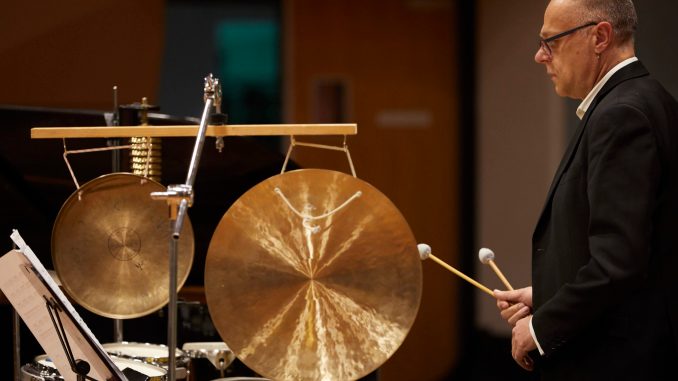 John Adams broke through a severe period of writer’s block with Harmonielehre, sharing in his memoir that his 1985 composition “was a statement of belief in the power of tonality at a time where I was uncertain about its future”.

His inspiration for breaking through his creative slump? Not the music of those who came before him, nor their writings on music (though, Harmonielehre is named in reference to treatises on harmony written by Arnold Schoenberg and Hugo Riemann). Instead, Adams had a vivid, Christopher Nolan-esque dream of an oil tanker in the San Francisco Bay launching itself into space, thus kickstarting a creative frenzy resulting in a 40-odd minute behemoth of post-minimalist, Romanticism-infused symphonic expression.

The Melbourne Symphony Orchestra will join forces with conductor Lawrence Renes to perform this symphonic work. And to the orchestra’s percussionist Robert Cossom, Harmonielehre “is such an awesome piece”.

“It’s so colourful and beautiful and rich, and it’s a furtherance of the music of Mahler and Wagner,” Robert reckons.

“We’re performing Mahler Four right before this work, and Mahler and Adams pair like wine and cheese.”

While Robert and his colleagues are excited to perform any such large-scale work in this lingering pandemic (“no one has played much for a while, and so to have the whole orchestral sound onstage is completely and utterly awesome”, he notes), Harmonielehre is particularly momentous for the percussion section.

“There are only four percussionists onstage,” Robert explains. “But there are so many percussion instruments! They just take up the entire width of the stage.”

“We’ve had to bully the timpanist into going right back against the wall of the stage, because there’s just no room for them. But the rest of us, we’re all walking around the set-up from one thing to another. And there are many notes to learn!”

But why does a piece so largely focussed on the power of tonality and harmony employ such massive percussive forces?

As Robert explains, Adams favours the pitched percussion instruments in this work, rather than the untuned percussion usually associated with Adams’ minimalist predecessors.

“[Adams] has used the tuned percussion instruments really effectively. For example, there are a number of sections where two players are playing one marimba each in the same register, and the effect is this really thick texture with lots of harmonic stuff going on. It’s really cool.”

The MSO will be led by Lawrence Renes, a renowned Dutch-Maltese conductor and champion of the music of John Adams.

According to Robert, Lawrence is “quite keen on the flow of the music and bringing out a nice balance of sounds”.

“He’s creating a quite affective, emotional reading of the work. I’m really enjoying it so far!”

While there may be some segments of the concertgoing public that remain sceptical of more modern compositions, Robert urges people listen to Harmonielehre.

“It has the vibrancy and lightness of Californian — specifically, San Franciscan — movies and TV, and it makes specific references to Wagner, Mahler, and Sibelius. The music of Adams is just a little further down the road from that of Mahler.”