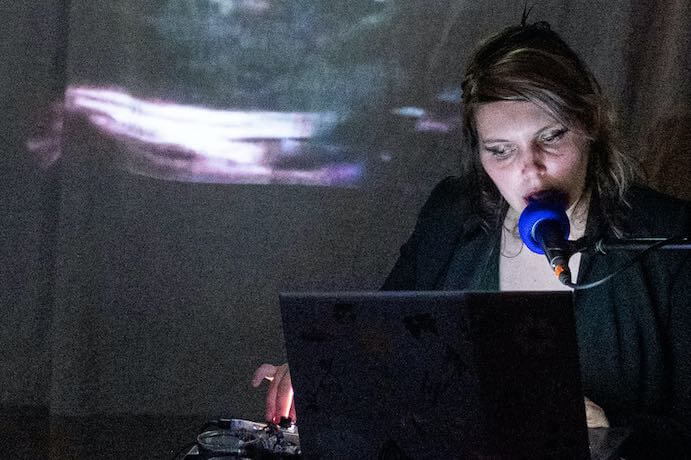 London concert life is slowly reopening to limited audiences, and it was a particular pleasure to learn that one of my favourite London venues was again welcoming live musicians. Like its neighbour the Arcola Theatre, Café Oto (‘sound’ or ‘noise’ in Japanese) is, to say the least, a raw space. A former warehouse with a bar in one corner and an interesting selection of books, vinyl, and cassettes in another, the performance space has a cloth backdrop and an odd hump in the middle of the floor. On 30 June 2021, there were only about 40 of us in the space — socially distanced, seated at tables — when in normal times the venue can accommodate well over 100 packed close together. Draught beer is served in 2/3 pint glasses, because why not.

For over 20 years, Café Oto, founded by the British-Japanese couple Hamish Dunbar and Keiko Yamamoto, has been an essential home for experimental contemporary music of all genres. Established names tend to bring their passion projects to Oto: on 23 June 2021, I had the privilege of being in the small audience for the vocalist and movement artist Elaine Mitchener’s spellbinding programme, which ranged from Fluxus text pieces to physical performance. While there is no such thing as a typical Oto programme, diversity has always been their watchword, and the event on 30 June showcased four women from a wide range of creative backgrounds. Amplified voices were the only common thread. Amy Cutler, a geographer, musician, and filmmaker affiliated with Goldsmiths College, London University recently gave a talk on Nature’s Karaoke which included a Zoom species singalong. It appears that in the UK, current Covid regulations permit group singing in football stadia but not elsewhere, so there was no audience participation in the Oto event. Cutler coupled kaleidoscopic projections that occasionally came into sharper focus — a white horse and the silhouette of a woman came and went — with a continuous and very reverb-heavy soundscape. Sitting at a desk, she added to the sound with vocalisations. Echo effects blurred meaning, and towards the end, the volume and bass pumped up and we heard distorted samples of half-remembered songs. This dreamlike experimental film created memorable images and sounds; I’d like to see more of Cutler’s work.

The Canadian composer Cassandra Miller is well-known to London new music audiences as a composer, but this was a rare opportunity to hear her as a performer. In her introduction, Miller suggested she was a frustrated performer who has recently started incorporating singing into her writing process. Her work is often inspired by recordings, and this improvisation was rooted in a violin work recorded by a Greek performer from the Albanian border. The themes of exile and isolation in the original were heightened in Miller’s multitracked vocal performance, as if she were creating harmonics from her own source. She added a harmonica to the range of sounds, more as an enhanced breath than anything else. Her haunting performance — singing a deracinated folklike song with herself — resonated strongly with the current times, when many of us have gotten used to our own company a little too much. The final set was a collaboration between the dramatic soprano, composer and improvising vocalist Alya Al-Sultani and the award-winning turntablist and composer Mariam Rezaei, both experienced performers though they had never previously worked together. They were more extroverted performers than Cutler or Miller, and their improvisation provided a welcome injection of rhythmic dynamism, contrasting with the continuous flow of the other sets. Erotic playfulness, the mating of the human voice and the machine, was their apparent theme, moving in and out of recognisable texts (I want you/female/this is how it is). Al-Sultani unleashed considerable vocal power, and her virtuoso vocalising engaged playfully with the turntables. Rezaei brought rhythmic quirkiness, sudden drops into a lower register, and a cartoonish wit to their 25-minute performance. The explicit emotional intensity, expressed confidently by the two women, was both empowering and a telling foil to the inward emotional power of Miller’s set and the enigmatic dreamscape of Cutler.

Everyone said how lovely it was to hear live music again, sharing the space with real people. Café Oto combines a laid-back atmosphere with a DIY aesthetic (staff moved wooden panels to block out the light from the windows before Cutler’s set) and a remarkably attentive audience. As for all cultural venues in the UK, times have been extremely tough recently for the venue, and ‘Support Café Oto’ posters are plastered outside. No other London venue does so much for experimental music, and their audience need to carry on buying tickets, downloads, and 2/3 of a pint of beer.