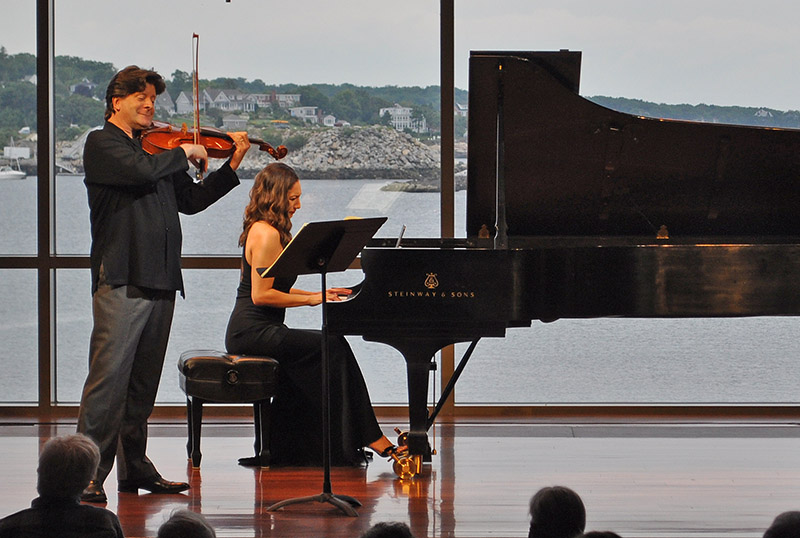 If you were not among those fortunates who experienced the exhilarating performance of Artistic Director of the Rockport Chamber Music Festival Barry Shiffman (viola and violin) and pianist Tanya Gabrielian in person on Sunday, you will be able to see and hear it virtually starting on the 13th of July through the 20th HERE. As with all of their intermissionless festival concerts, this one ran twice (at 5p and 8p) for grateful (distanced) audiences, with libations available before and after.

It takes concentration to listen well to the second movement of Bach’s second partita for solo violin. The famous Chaconne in D Minor has been transcribed for nearly any instrument you might name. To allow the viola to dance, sing and mourn, Shiffman transposed the work to g minor, and delivered it with focus and controlled joy. Written, many speculate, as part of Bach’s mourning and recovery from the death of his first wife, Maria Barbara, the work’s technical challenges render mastery daunting. And the 64 variations, over some 13 minutes, challenge the listener to appreciate its breadth.

The sound of contemporary luthier Samuel Zygmuntowiz’s pure yet throaty viola, paired well with the raw emotion of this profound composition.

Next, Shiffman, joined by the radiant and poised pianist Tanya Gabrielian, continued the g-minor thread of the Bach with a masterful presentation of Florence Price’s 1933 Fantasie Number 1 for violin and piano. Its cadenza-like beginning, gave way to a second lento theme in b-flat major with elements of Black folk music, before returning to g minor. In articulating its contrapuntal qualities with blues and folk components so well, the duo demonstrated why Price is achieving so much long-deserved attention for her substantial body of work; her imaginative harmonies, integration of African American folk music and gospel, and compositional complexity compel our attention.

Shiffman and Gabrielian continued with Price’s well-known Adoration, written in 1951, close to the end of her life. Perhaps, as Shiffman noted in post-concert conversation, the piece would make a fitting encore, but its adaptation for many instruments and combinations speaks to its beauty, for Adoration blends melody with a hybrid of European and blues harmonies in a timeless homage.

Gabrielian returned alone with an exciting version of Fantasie Nègre No. 1, in E Minor (1929). Price’s variations on the theme, “Sinner, please don’t let this harvest pass,” enchant and surprise with imaginative harmonizations. Tanya Gabrielian is stunning as a pianist, but even moreso as a musician. She shone with confidence, as well as faithful adherence to the score and composer’s intent, and she masterfully conferred its depth and passion employing her instrument’s broad range with superb phrasing.

Brahms’s late and much-celebrated Sonata in F Minor, Opus 101, number 1, for viola and piano, crowned the concert. Though he first wrote his two opus 101 sonatas for clarinetist Richard Mühlfeld, he presented his publisher with both clarinet and viola versions nearly together, but perhaps because Mühlfeld was touring with the new sonatas, he published the viola versions later. Here, Shiffman and Gabrielian collaborated seamlessly from the first measures of the turbulent Allegro appassionato. Their traversal of the second movement Andante un poco Adagio evoked wistful yet deep longing, followed by a thoughtfully and playfully executed Allegretto grazioso. The final Vivace was just jubilant.

Twelve more RCMF concerts follow at Shalin Liu this summer—the performers, programming, and the milieu should not be missed.