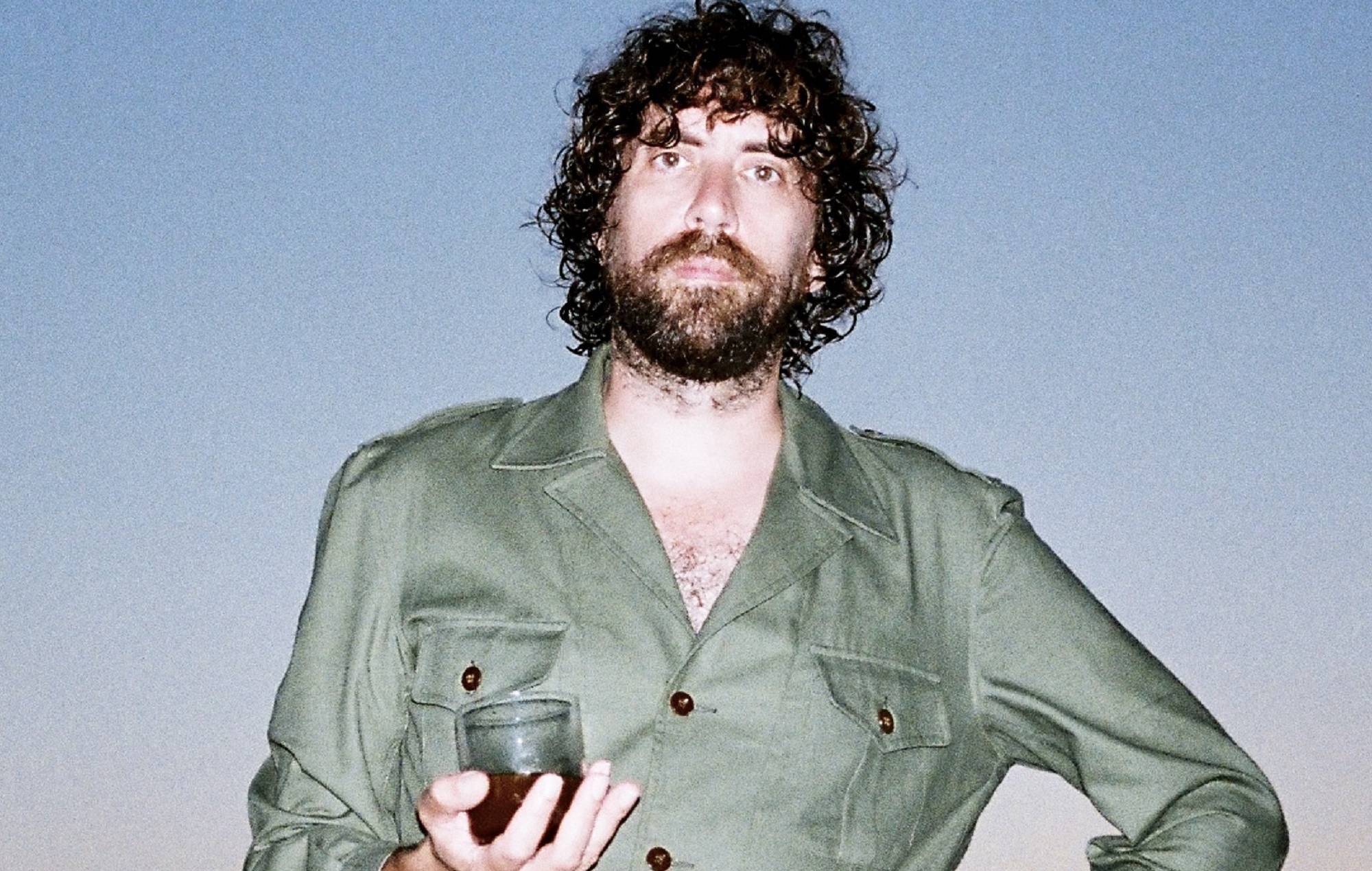 As one half of French electro duo Justice, alongside Xavier de Rosnay, Gaspard Augé has made some of the most iconic songs in music history. Now, 14 years on from their groundbreaking first album ‘†’ (which spawned the timeless hit ‘D.A.N.C.E.’), Augé has shared his debut solo album ‘Escapades’, a space-age synth odyssey.

While there are plenty of Justice-sounding anthems (the orchestral ‘Hey!’ and ‘Force Majeure’s dazzling chords and funk-fuelled bassline), the Paris-based artist also freely explores his prog-rock, electro and soundtrack composer influences. Recorded in Paris with French composer Victor le Masne, known for his work with Chilly Gonzalez and Metronomy‘s Joseph Mount, ‘Escapades’ is an album that veers between psychedelic folk, Italian horror film soundtracks and, says Augé, “every conceivable point in between”.

NME jumped on a Zoom call with Gaspard to talk all things ‘Escapades’, soundtracking the Euros, what’s next for Justice, that Justin Bieber feud and why he thinks cynicism in modern music is “the death of art”.

Hi Gaspard! What made you want to start making music as a solo artist?

“I had a vast amount of melodies and arrangement ideas for years and just took the opportunity to do my own thing. It’s always fun to get out of your comfort zone, whatever you’re doing. But I never thought about it before because I never felt frustrated in Justice, because we have a very democratic process. If one of us doesn’t like something, we just scrap it. But there’s always some level of compromise… So it’s interesting and exciting for me to do something very personal and maybe more in touch with what I’m listening to at the moment.”

With the impact that Justice has made, did you feel nervous about going it alone?

“Maybe at first it was a bit of a concern, because when you go solo you’re always starting from zero. But, when you’ve had some kind of previous success it’s different. When I was making the record, it was important to make something that was neither electronic or pop or club and just to do something without any pressure – something very universal, in the sense that it’s instrumental, which is kind of weird as you know it isn’t going to be played on most radio stations. Obviously, you can hear some similarities with the Justice music, but then it’s different too. It was really liberating, because I think people might have had some preconceptions.”

Was it important that you felt free to experiment sonically and retain creative control while making your first solo album?

“Definitely – because the egomania in music had got a bit tiring for me. Most people are in such a need of public validation, and so I think it was just positive for me to do something in a very sincere and almost naive way. Most musicians are taking themselves so seriously, and I just wanted to bring the fun back. Everything seems so controlled and minimal; as soon as you put too many notes it’s seen as not right. But I just like melodies, harmonies and arrangements. Some people might find it a bit… not corny, but over the top.”

What’s the story of ‘Escapades’ and what does it mean to you?

‘Escapades’ is a record I mostly made for myself, but it’s not abstract or self-indulgent. It’s easy to get in and lose yourself. In that sense, I think it’s universal because – depending on each listener’s musical background – it will make you think of different things. Also, I didn’t put lyrics or vocals onto it so people could put more of themselves onto the music, to have something open with no language or lyrical content that will hopefully stimulate the imagination. To make it less passive, basically.

“There are a lot of hints and references to the stuff that I listen to, which is mostly library music from the 1960s, ’70s, ’80s, or movie soundtracks. But it was never meant to be some kind of homage; it’s more because the state of mind during these decades was very optimistic and you had this utopian idea of what society and music could be. While making this record, I was into the end of the space age and the promise then of a better world – there’s something very naive and sincere about it, and that’s what talks to me in this kind of music.”

The album has a very cinematic feel – did you want to offer listeners a sense of escapism?

“Yes, because today there is a lot of cynicism in music, even if it’s well hidden. People are so obsessed with what their audience thinks. It’s important to do things and share them but it’s also important to be sure about what you’re sharing and not overshare. For example, it seems really weird to me that when you go on social media, artists are asking people, ‘Should I put this song out?’, or ‘should I change this hi-hat?’ There’s no point in asking people what they want – it’s really the death of art. Because the only thing interesting in art is being yourself and having your specific voice. If you start thinking about having to do something that people will like, it’s the worst path you could take.”

You describe the new work as “ignoring narrow definitions of good taste or bad taste”. What do you mean by that?

“I guess mostly because everybody has their own definition of good taste and bad taste. But, for me, with Justice, that never really came into consideration because there is no good or bad taste. There’s just stuff you like or don’t like. If it makes you happy, then there’s no scale. I think it’s also got to do with a perception of coolness, which is probably the most looked after currency today – even though it’s not something you can run after. If you’re trying to keep up with the trends of today, you’re always late to catch the train. The coolest thing is probably more when people are really true to themselves.”

How does the album artwork fit into the sonic world that you have built?

“I wanted to have something symbolic, a bit absurd and surreal, in the manner of what Hipgnosis were doing. They’re the graphic design studio who did all the covers for Pink Floyd and that’s something I’ve always loved. For my record cover, I liked the idea of having the modern element, a tuning fork, which is very shiny and chrome, and it gets thrown from the sky into a rocky mountain setting. I felt it illustrated the maximalism and escapism of the record.”

The album’s lead single, ‘Force Majeure’, was chosen for the BBC’s official Euros song. Why do you think they chose it?

“It’s great because, in France, we have Coldplay, and in the UK you have ‘Force Majeure’! I guess there is some kind of epic-ness to it that really fits the atmosphere of a football match. And something I always really enjoy doing is going a bit over the top, to have at least one very straight forward emotion that is conveyed. I love music that is either really melancholic or music that is epic. I don’t really like music that’s a bit middle of the road.”

Have you got any plans for live shows around the album?

“I’m still thinking about it, but something with a live orchestra or choir that’s over the top as well, because I can’t really think about this record being played by a five-piece band. To add another dimension, to have a few one-offs to make it really special.”

We’ve got to talk about Justin Bieber’s artwork for his recent album ‘Justice’, which you called “a very conscious rip-off” of your logo…

“It could have been laughable if it had been a coincidence, but it was actually a really blatant rip-off. Obviously, we didn’t invent the cross or the word “Justice”. But the combination, and the fact that it’s been with us for more than 15 years, and that his team asked to get in touch with the graphic designer… It was definitely intentional and there’s proof too.

“The most famous artists of today are mostly American and I guess it’s just the way they work. They see something they like and then they take it and they know they will get away with it so they just don’t care. That’s how it is with these rich people.”

And what’s next for Justice?

‘We never stopped working, so we’re in the process of making a new record. Hopefully it won’t be too long until that comes out…”