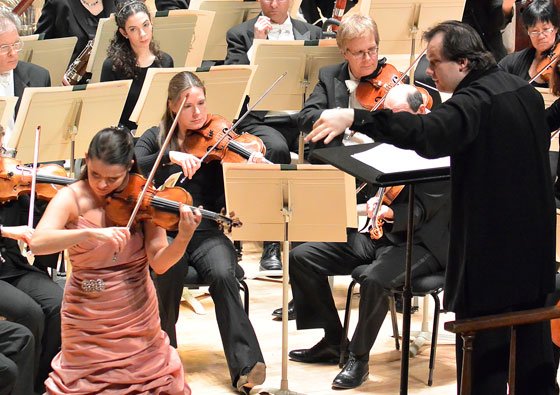 Fate Now Conquers, a 2020 piece from the emerging Atlanta-bred composer Carlos Simon, originally commissioned for the Philadelphia Orchestra, offers a response to the Allegretto from Beethoven’s Seventh Symphony. (The title comes from The Iliad as quoted in Beethoven’s journals.) After having trained at the University of Michigan, studying under the chameleonic composer Michael Daugherty, Simon’s varied career has taken him through Broadway (working with singers Jennifer Holliday and Angela Stone), gospel, and symphonic music.

With string ostinati, muted trumpet smears, timpani rumbles, and wandering woodwinds pointing the way, Simon’s composition launches straight away into turbulence. We encounter lots of triumphant, vaguely cinematic gestures, some chatter from the brass in minor thirds, and a few dramatic flourishes reminiscent of John Adams. (It’s not surprising to find out that Adams conducted an early workshop of the score.) Fate lasts only five minutes and is generally received warmly — even more so when the composer appears onstage for a bow.

Probably the greatest compliment I can pay to Sibelius’s Violin Concerto is that it’s the Mahler’s 7th Symphony of violin concertos: it’s a tough, unwieldy, intriguing nut to try to crack. The composer’s soundworld, especially as expressed herein, rewards patient, repeated visits, but can come off as obscure, and even obtuse, at first listen. The concerto takes its time through a meandering tapestry of vaguely programmatic moods, but beyond a few memorable dramatic moments and virtuosic traces, never quite coalesces into a unified (or at least easily identifiable) masterwork on the level of similarly virtuosic violin concertos by say, Prokofiev, Mendelssohn, or, especially, Brahms.

An Allegro moderato movement opens the work, with solo violin spinning delicate weaving in a sweet ascending melodic minor mode, and soloist Baiba Skride leaning into a delicious augmented fourth dissonance on the note g sharp. Particularly lovely clarinet pairs with the soloist’s deliberate pacing, which picks up steam, and as the music intensifies, we’re treated to some extraneous bird chatter in the shed rafters. (No matter, as the imposition of a few sounds of the natural world surely befits the shared affections of these 19th-century composers.) Skride demonstrates an astonishingly clear tone, consistently finding the very center of the note, with a husky, broad sound in the lower register, executing effortless leaps to a piercing clarity in the upper.

Skittering about through mini-cadenzas, octave leaps, and double stops, all of which engage the entire range of the instrument (in this case, the Yfrah Neaman Stradivarius on loan), the solo part feels like an idiomatic catalogue of the violin’s technical possibilities. (Though at times one wonders to what expressive end.) Skride isn’t shy about physicalizing her role, at times almost taking on the role of a secondary conductor.

One challenge of realizing this music effectively is in navigating Sibelius’s almost glacial pacing. Most phrases take their time unfolding, leading to a number of moments of near stasis, and performers aren’t always able to rely on standard melodic or thematic development to advance the work’s emotional momentum. Still, there’s an inner logic to many of Sibelius’s melodic lines, and Skride acquits herself marvelously well throughout. A countrywoman and frequent collaborator of the BSO’s Latvian conductor Andris Nelsons, Skride genuinely owns this work in a way that approaches the distinction of what is perhaps the most famous string soloist and concerto pairing in recorded history, that of Jacqueline DuPre’s definitive 1965 recording of the Elgar Cello Concerto on the EMI label.

Amidst the din, we’re given a few warm, lyrical, tuneful moments, many expressed with double stops, in nostalgic parallel sixths. The Sibelius is a Romantic tour de force trapped inside darkened, murky gauze, and listening to it feels like trying to glean information from a mysterious stranger who won’t quite look you in the eye.

The second movement begins with seductive clarinets in thirds, then works its way into a patient Adagio, punctuated by soft horns, creating a feeling of something finally being discovered. Crescendi are warm and supple and totally believable, and the orchestra and soloist come together to weave something delicate and magical, and as the score indicates, sonoro ed espressivo. Though the certainly agreeable journey, one finds few obvious melodies, and precious little development. There’s far more mood and affect here — warm horn-led chorales and swooning strings redolent of the penultimate gasps of Romanticism — than tunes on which to hang one’s hat. Though there’s a fiery core hidden somewhere underneath all this, we find majesty without memorability, married to indistinctness and emotional distance, as our lingering hallmarks. (It’s worth wondering whether all this coolness and remove might emanate from Sibelius’s own ill-fated journey as a frustrated violinist himself.)

The third movement Allegro begins as a rollicking train ride, appealingly eager in a slightly stulted and jaunty triple meter. Dramatic, booming cadences surround the soloist as she prances nimbly through treacherous scalar passages. Skride’s high register is so consistently impressive, and pings off the ceiling of the shed.

After Sibelius’s gauzy veils and cloaked veneers, the far more emotionally direct language and affect of Dvořák’s Sixth Symphony in D Major provided a refreshing contrast. (This is true even as the triple meter continued smoothly from the finale of the Sibelius to the opening movement of this work.) One senses the presence of Dvořák’s advocate Brahms here, in particular the Second Symphony in D (1877), composed three years prior to this one. We’re off on a picturesque sunlit waltz in the first movement Allegro non tanto, strings leading the charge through appealing scenic vistas. (These sorts of programmatic associations would have been an assumed component of the music’s reception at the time, and it’s easy to create one’s own narrative, even if they usually have something to do with a “spring ride through a hilly European countryside in a horse-driven carriage.” A generic, but at least refreshing, tonic.) Dvořák’s pastoral melodies tumble charmingly from one to the next, without any serious danger or drama; even when minor-key cadences occur, there’s a jocularity and sunny optimism that lingers in the background. The movement concludes with a pleasantly squat and round rotundity.

The second movement Adagio opens with reflective woodwind cadences, giving way to strings who support brief oboe and horn solos. Reaching, bucolic melodies are freely exchanged by the woodwinds and horns, and the BSO’s strings (in spectacular form in both weekend concerts I heard) are supple, exacting, and attractively lush. Dvořák employs in this movement what I’ll call “Brahms-ian mirrors”: short phrases repeated under shifting and varying harmonic guises, which allow for a reflective consideration of the phrase’s harmonic possibilities. Lots of lovely colors and lush valleys ensue, but then again, not nearly as many memorable melodic traces as in some of Dvořák’s better-known works — especially the Ninth Symphony in E minor, which dwarfs this one in the canon. It’s intriguing to ponder whether this imbalance is a result of happenstance, biography, or as a result of the Ninth’s famous “New World” and American connotations, or whether it really does just have better and more succinct hooks? (My guess is that all are true.)

The third movement Scherzo (Furiant): Presto, quintessentially Dvořák, is instantly more dramatic, featuring eager folk-dance figures—the “furiant” is a heavily accented Bohemian dance—with attractive timpani blows and string and horn swells. Dvořák builds tension via climbing, repetitive figures in the strings paired with clattering brass exclamations; all of these techniques foreshadow their almost identical (and better realized) usage in the “New World.” We hear a few disagreements with tempo — it’s tough for an orchestra this large to uniformly agree on a pace for accelerando passages, particularly when mimicking the raucous sound of folk-dance music. The cries of the shed rafter bird return quite prominently, chattering away with the woodwinds, and perhaps requesting some Messiaen from the BSO? (I’m with the bird on this.)

While well played, with sections of the orchestra balancing wonderfully against each other, the Finale comes off as self-consciously dramatic and a touch overblown. This music takes itself very seriously, as befitting its origins in the often didactic and hyper-competitive field of late 19th-century European symphonic composition.

We heard nice music played at a high level this Sunday afternoon, but I’m left wondering, what’s the purpose of this program, apart, that is, from having the chance to gaze backward to the late 19th century to hear two somewhat rarely performed symphonic works, which happen to share a few not terribly remarkable similarities, in a single span. (Both works utilize triple meter and both are in d major.) Unlike the clear highlight of my weekend, Friday night’s thoughtful and engaged recital by the Knights, [my review HERE], I could glean no distinct musical, thematic, or culturally-evocative glue binding these three works together. As I noted in my review of Saturday night’s all-Beethoven program, I can’t help thinking that as we return to a new normal in the immediate post-pandemic era, the exigencies of performance and rehearsals may demand a certain understanding and forbearance — after all, once the Sibelius was booked on the calendar, the Dvořák was probably easy enough for this orchestra to knock out without a heavy amount of rehearsal. But still, I reiterate the questions I posed in my account of the BSO’s Saturday night concert, [my review HERE], because it applies even more strongly to this one.

What’s really at stake here, for any of us, is how are we using this music (and potentially, its history) as a way to actively engage with the present moment, in all its deeply complex resonances and ambiguities?

I suspect the bird might know better than we do.

Jason McCool comes from a long line of Irish men who have been asked, “Is that your real last name?” Originally from Brockton, MA, McCool completed his doctoral work in musicology at Boston University in 2020, writing a dissertation on Hamilton: An American Musical, and has been an Adjunct Professor of Music at Boston College since 2018. In October 2018, he was a Fellow at the Rubin Institute for Music Criticism at the San Francisco Conservatory of Music. He founded, curated, and produced the pindrop sessions classical(-ish) event series as a collaboration with WGBH and WCRB, and a local brewery, which ran from 2018-2020. Holding degrees from the Eastman School of Music in jazz trumpet performance and the University of Maryland in historical musicology, Jason also remains a proud member of Actors’ Equity, even if he only gets to act out on the page these days.