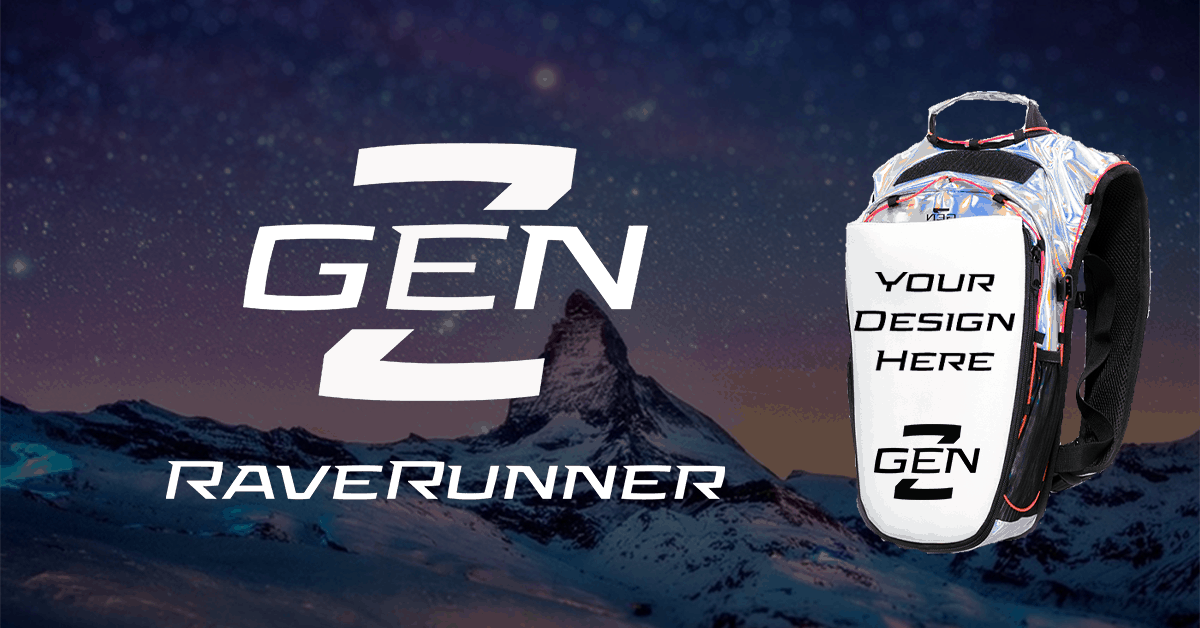 For the better part of a decade, I’ve attended more live music programming events than I could even begin to count, and as to be expected, over the years, I’ve both owned and have seen an innumberable amount of festical accoutrements hit the market. But as far as rave gear goes, GenZ Outdoor’s RaveRunner Hydration Pack just might trump them all. Let me explain.

We’re at a point when billionaires are taking casual trips to outer space, your next-door neighbor has 6 million followers on TikTok, and 12-year-olds have…fashion sense? In terms of modern dance music culture, the scene has gone from being deemed freakish and underground to selling out venues of more than 400,000 people in approximately 10 years’ time. This is all to say, who better to influence this new era of festival-going than the people who know it best—GenZ?

There’s a special sense of community to be felt when a product is made by the people, for the people. As the brand itself puts it, “GenZ was born to solve our personal problems. It just so happened that there are many other people that endure these same problems.” Let me be the first to say that I didn’t even know I had most of the problems that GenZ somehow managed to fix. I run through them below to put your next festival must have on your radar.

Assuming that no one rips it from the wearer’s body, the backpack is completely theft-proof. I know someone who has had their phone stolen at a festival twice in the span of eight months. Was it me? Who’s to say? But whoever it was, I’m sure they could attest that being in this position puts quite a damper on an otherwise flawless festival experience, not to mention the figurative hole that replacing the lost items burns in their pocket.

The RaveRunner has a variety of hidden pockets to store all the vital necessities. The largest pocket contains the water bladder and is only accessible from the back, but it’s made with a rip-stop nylon material.

We all know the feeling of dread that comes before refilling a hydration backpack at a festival. It’s punctuated by the swarm of sweaty and dehydrated attendees, fumbling around with your backpack to get the bladder out by the time you get to the station, and then of course, spilling all the water you just got all over yourself while trying to twist the lid back on—we’ve all been there before. The RaveRunner skips this barrage, offering a built-in two-liter bladder that wearers can unscrew and refill without the messiness of opening up the entire backpack.

Despite all the fancy logistical features, The RaveRunner’s design is also top-tier. The pack comes in two different options: black and holographic. The materials, which will run festival-goers anywhere from $79.99 to $141.99 depending on their stylistic choices, are sturdy, comfortable and—my personal favorite—customizable, offering an easily washable, printed foam skin that zips onto the rear of the backpack.

For an extra cost of $26.99, purchasers are able to add any picture, text, or color to the skin. Shout out to GenZ for printing me my own Dancing Astronaut skin so that I’m able to properly rep my outlet as festivals make their comeback.

One of the most exciting parts of this backpack is the fun add-on features that allow wearers to take the party along with them. EL wire lights wrap around the perimeter, and an underglow disco ball light syncs to the music and attaches to the bottom of the hydration pack by velcro. There is another velcro portion on the top of the bag holding a solar charger panel that allows for two devices to be hooked up and charged at once, including smart phones, mp3 players, cameras, and more. Gone are the days of losing the group due to a dead cell phone.

The only issue I faced while using The RaveRunner was a detached insertion pin from the customized outer skin’s zipper, which made it difficult to secure the skin in place. Other than that, though, this backpack holds the most efficient and altogether smart designs of any hydration pack that I’ve ever used, and all things considered, I’ll be using this one for as long as I’m attending festivals—and then some.