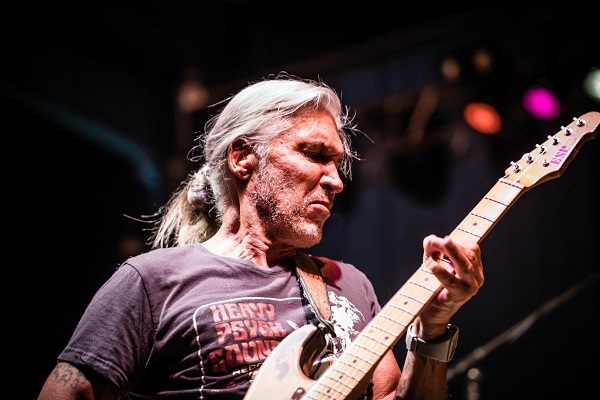 George Lynch joins Anne Erickson to discuss his debut solo instrumental album, “Seamless,” why he should tour with Cher and more in this in-depth interview

George Lynch is a man of many hats, but no matter what he does musically, it’s always a sure bet that his guitar will be at the forefront. Lynch is one of the most skilled and talented guitarists of his generation, and now, for the first time ever, he’s releasing an instrumental record.

“Seamless” is out now via Rat Pak Records. Lynch spoke with Anne Erickson of Audio Ink Radio about the new release, what led to him finally releasing an instrumental album and what it’s like working under a new band name with his other project, the former Lynch Mob band, which George Lynch previously spoke with us about here. Read the George Lynch interview below, listen via the YouTube player and hear it via the Audio Ink Radio show on Apple Podcasts here and Spotify here.

On what made now the right time to release his debut instrumental album, ‘Seamless’

The real story is, I had written a record intending it to be a new Lynch Mob record, and it didn’t pan out, because none of the vocalists that I talked to and worked with on it could really come up with anything to go over it. Nobody was really feeling it, and that’s the first time that’s ever happened to me as long as I can remember where I completely failed at a record. It wasn’t even salvageable. Looking at it and listening to what these singers were telling me, the critique of it was that it was just too intricate and too busy and too involved and wasn’t leaving enough space for the vocals to put their footprint on it, and I got that. I’m usually aware of the kind of thing when I’m writing, so I don’t know how that happened. I think I just got carried away and was having fun with the compositions. I think by default – a happy accident – I was making an instrumental record and didn’t know it.

Ideally, I think all instruments when they’re at their best are mimicking a human voice, because a human voice is the closest you can get to emoting whatever human emotion you’re trying to convey or idea. So, breath instruments, string instruments are trying to do the same thing but less so. They’re not as capable. There are some sax and slide guitar and pedal steel players that can make you cry. The solo in “Comfortably Numb” is definitely very human and emotional and powerful. But, and I do listen to guitar players, but I’m more a student of singers. I listen to a song and what makes an impression on me more than anything is the vocals.

On the album being all over the place thematically

The thing about a guitar instrumental record, at least for me- when I’m doing projects that are band projects, you’re defined by what that band is and its history and people’s expectations, so you have to work within those confines. With an instrumental record, you don’t. You can, but I didn’t. There’s nothing seamless about it. There’s no universal theme that ties everything together other than I’m playing on it. But, there’s no hidden glue that ties it together.

On playing shows with Dokken again

It’s been great. We make up for the rustiness, and I think this is true of almost all bands that I’ve talked to as we’re all reemerging here- we make up for the rustiness and blow off the cobwebs and stuff with enthusiasm. All the bands are so excited about getting there and being onstage again. Everybody has this energy and joy that I didn’t see before. When I think pre-pandemic, a lot of people were out there just sort of going through the motions, and this is what we do, and it was routine. Now, they’re very appreciative of being back out there again, as are the audiences. They’re really, very enthusiastic, which was really cool. We just played a show in Vegas, and I think it was probably one of the biggest crowds they’ve had there. I’m not saying that to brag or anything. I’m just saying that’s what I was told. So, there’s a lot of great energy. Because you wonder about getting back out there right now, because it’s still not completely safe or anything, of course, so you have to be careful. I don’t want to be the one responsible for attracting crowds of unmasked people that are getting each other sick, so there’s that, so it’s a little bit of a balancing act. If it gets to the point where it starts locking down again, it’s going to be very hard on people, because music is so important to people. It’s crazy. It’s like food and air and water.

On going forward with his band Lynch Mob under a new name, George Lynch’s Electric Freedom

It’s liberating, actually, to be quite honest with you. To have a new band and a new name and a name that- I mean, just the power of the name, because with the new name, which is George Lynch’s Electric Freedom, it really is electric freedom. I didn’t even think of it that way, but Michael Devin and I were were talking the other day on the way home, and we were like, this really defines the band- the name really does. Because we’re plugged in, we do a lot of off-the-cuff improvisation during our show, which you don’t see very much in rock ‘n ‘roll anymore, not since the ’70s, and we’re big fans of that. That’s what we were raised on. So, I think it’s more alive and vital than your average thing when you just go see a band and they’re playing songs they wrote 35 years ago, and sure, it’s great. I want to hear the songs. That’s all good. But these guys have been flogging these songs for decades! I’ve been doing that, too. That’s not what I’m about. I can do it, but I like to bring the audience another perspective and another dimension to what can happen onstage, and that is the creative moment in real time- experiencing that and witnessing that, and for me to play that and the band to play that… Every time you can and see my band, it’s going to be different. It’s going to be different members, we’re going to play different material, and it’s like snowflakes.

On new music ahead for George Lynch’s Electric Freedom

It’s not in the sense that’s we’re working on it, but we have discussed the idea of doing an EP. We want to go a little more old school and do something that’s pretty easy for us to make instead of taking on a whole album project with a new band. Let’s just do four songs and hand one out to the fans for free and just get people into it and put a lot of work into those four songs and make it easy, so it’s not this big, giant burden for us. If the EP blows up, which I think it will, then we’ll do- when we’ve been together a little longer, then we’ll do a real record. But, I definitely believe we need to document what this band is, because it’s very, very cool. It’s a power trio, with Michael Devin singing and playing bass and Jason Sutter is on drums, who’s been in a lot of bands, currently in Cher and he’s been in Foreigner.