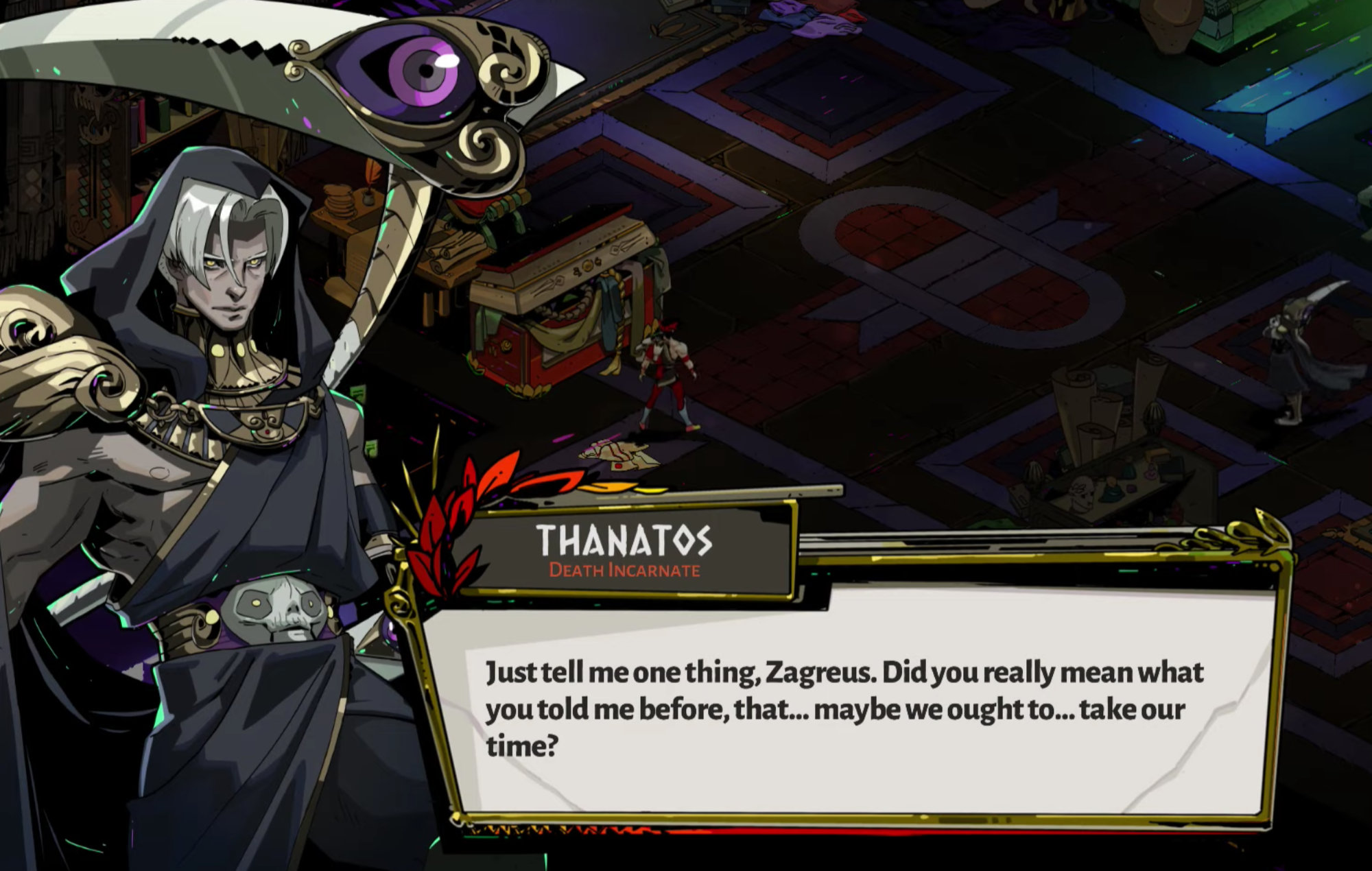 In any other world, he’d be the villain: pretty, British, sarcastic, opinionated, Queer-coded. But not here. Not in Hades. Zagreus is your hero, your anti-hero. And he was made that way. This cocksure – yet oddly empathetic – prince of the Greek underworld is at once irritating and devilishly loveable. And he’s bisexual, too. Of course.

“With Zagreus, he is not a character of our invention: little is known about the God himself – and some of the stories about him are quite contradictory and strange, such as his connections to the god of wine and debauchery, Dionysus,” says Supergiant Games’ creative director Greg Kasavin. “But we had something to work with. With Zagreus, we were creating a ‘power fantasy’ character, right? He’s a God, he’s faster, he’s stronger, he’s better looking than most of us, he knows how to say all the right things at all the right times.”

Zagreus was made for you – the player character – to have fun with. Whether you’re dashing about with the very bow that pierced the heart of three titans at once eons ago or simply chatting to your one loyal fan watching you from the seats of a packed stadium as you stand over your fallen nemesis, Zagreus is designed to be cool. He’s suave, quick-witted and wicked-tonged. He’s sexy without being smutty. Charming, but fallible. He’s everything I, really, aspire to be.

And he’s probably one of the best examples of a bisexual character in gaming, too. There’s a strange dichotomy when it comes to bisexual representation in media; we’re either completely ignored and overlooked, or painted as scandalous, greedy hedonists that value physical validation over emotional connection. With Zagreus, we see a sensitive and considerate lover – motivated by more than just carnal desire – whether you choose to romance Thanatos (the physical incarnation of death), Megeara (the first boss, and one of the Furies) or Dusa (seemingly the disembodied floating head of Medusa). Seeing a bisexual character, and particularly a male bisexual character, presented in this way is encouraging – and perhaps one reason the game has such a strong LGBTQ+ following.

“Zagreus being bisexual was always intentional during development,” says Supergiant Games’ Greg Kasavin. “With the setting in particular, it makes sense; the values of the United States or the United Kingdom or anywhere else in 2021 are not the same as those of Ancient Greece. As a work of fantasy fiction, essentially, we have an opportunity to create a world with values that are not necessarily the same as the ones we know. That would be boring. What use is a fantasy world with exactly the same rules and values as the one we live in? And I think the opportunity to create a world kind of free from some of the same kinds of prejudices and misgivings that exist in our world today is refreshing, as a creator.”

Supergiant was not interested in making the archetypal anti-hero character with Zagreus, in the same way it wasn’t interested in making the supporting cast of Hades your typical non-player characters, either. The result is a vibrant, engaging cornucopia of gods and heavenly deities that each have their own defined personalities and deep veins of interpersonal backstory that pepper each of your potentially endless playthroughs with personality, mythological trivia, and drama. You want to get to know these characters. Some of them, you want to get to know intimately.

“It was really important to us that each of Zagreus’ relationships across the entire game were different: the role of each unique character in the story is to present some different dimension of the world, and of Zagreus’s personality, too. Through the combination of all the different characters, you hopefully get a rich sense of the setting – and the characters themselves can feel fully realized,” Kasavin explains.

Bisexual representation in games is often criticised as being ‘player-sexual’; potential partners of various genders will be attracted to you because you’re the player, not because they’re queer themselves. In using wider interpersonal dialogues to flesh out Hades’ supporting cast, Supergiant Games sidesteps this issue and makes it abundantly clear that Dusa, Megaera and Thanatos are specifically attracted to Zagreus, not you. 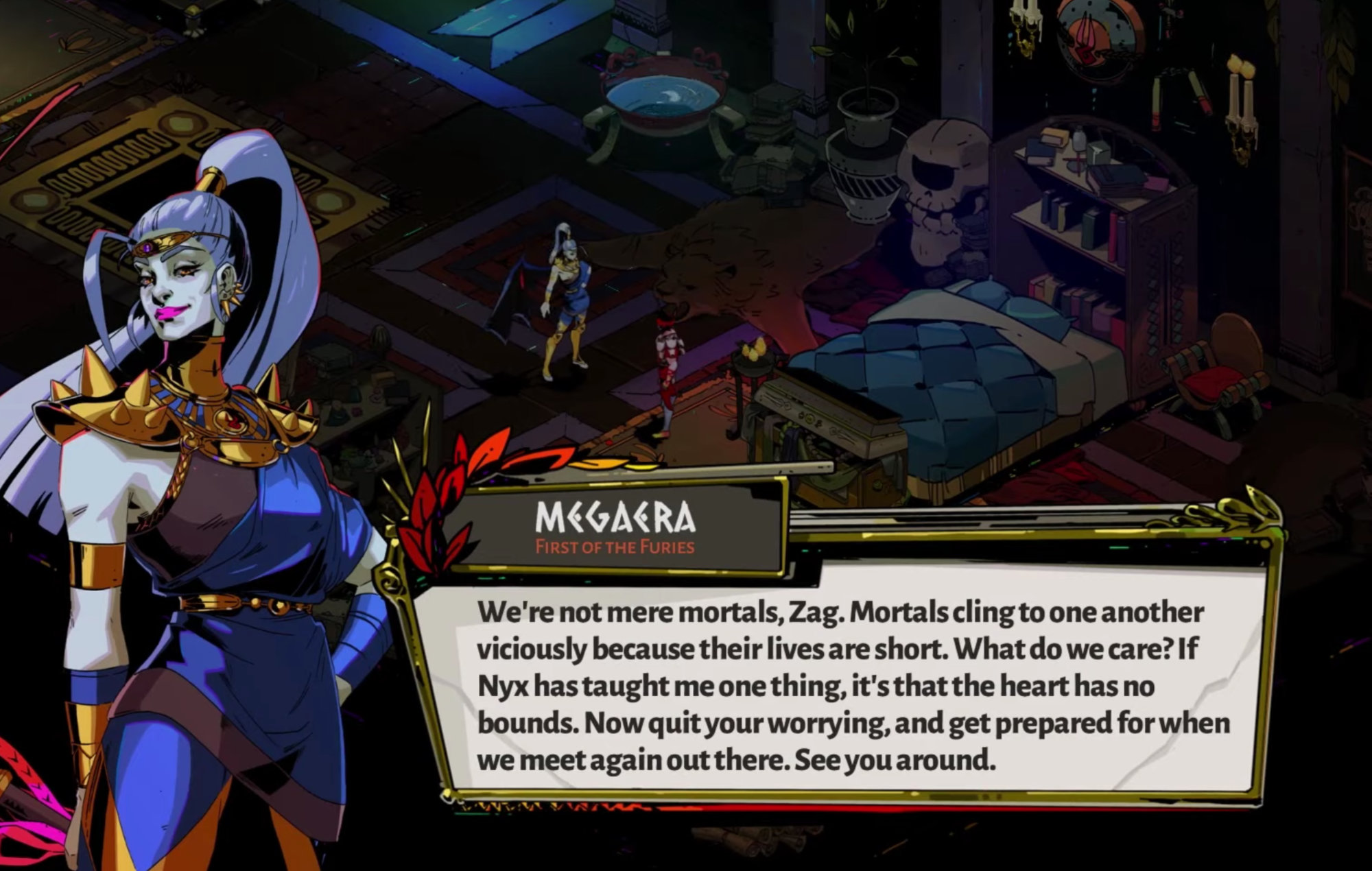 “We also have the little moments where the characters interact with each other, not just with Zagreus, right? It’s very important to us to create the sense that the world doesn’t just revolve around you, the player. These characters exist; they’re people and they exist in this world.”

Never is this more clear than in the various dialogue options that manifest if you choose to romance both Thanatos and Megaera at once, taking Zagreus down the polyamorous route. Megaera – known as the Fury that punishes jealousy, of all things – tells Zagreus to brush off his concerns about being in love with the both of them at once, that she’s robust and independent enough to deal with his affection being split two (or more) ways.

And given Zagreus and Megeara’s relationship exists in a semi-sadistic ‘crush your crush’ setup in the first place, these lines all serve to make her character and personality stronger. Given that there’s even a narrative thread you can pull which leads into gaming’s most wholesome threesome (if Zagreus plays his cards right), it feels like Supergiant has considered its stance on romance and its characters sexuality. These scenes don’t exist purely for titillation; they move everyone’s story forwards. In a few simple lines of dialogue, Supergiant establishes some of the best polyamorous representation in gaming. And it all feels so natural to the world of Hades. 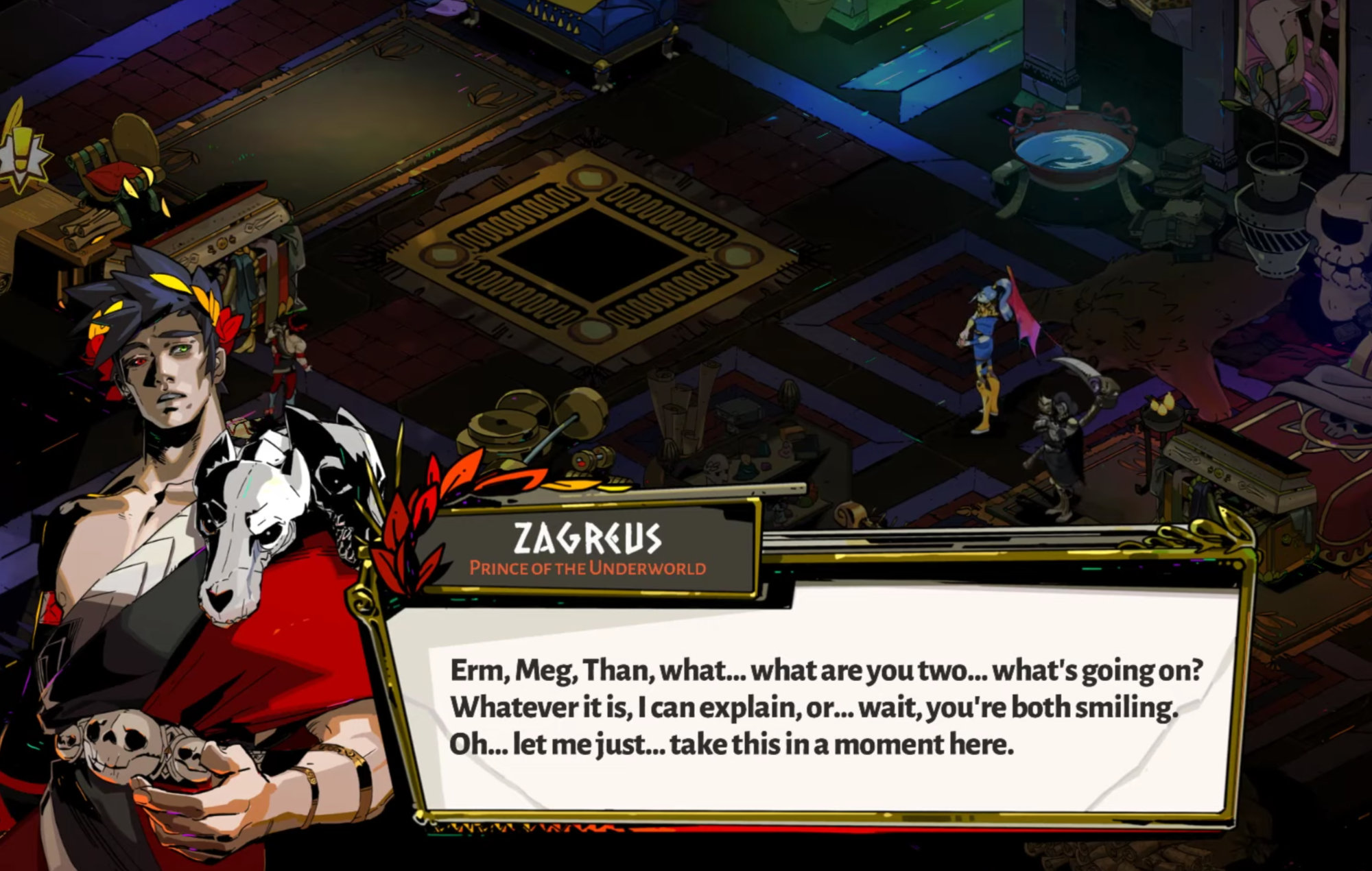 “When it came time for Zagreus to have relationships with Megara and Thanatos – and how they interact at this point – it made sense to [go the polyamorous route], especially in this setting. It didn’t make sense to do it any other way, I would say. They’re Gods! Their value system is different and they don’t face the kinds of challenges around having to be the person that they want to be – and be with the people they want to be with – in that world.

“That’s how we cut through some of the stereotypes. […] Zagreus potentially being polyamarous, as a particular detail, that wasn’t necessarily there at the start of development, and it’s something that evolved as we developed the game,” says Kasavin. “And [his sexuality] happens to be authentic to Ancient Greece, as well – one of the most compelling questions I found when writing Hades was asking myself ‘in what ways has society changed in three thousand years? In what ways has it not changed? In what ways has it potentially even moved backwards?’

“[Despite these relationships], there’s still plenty of conflict in the game, including interpersonal conflict, between Hades and Zagreus. But it’s never conflict based on who people love; that’s something of no concern to the people in this world. It’s just accepted.”

The nature of the stories of Supergiant’s other games, Bastion, Transistor and Pyre, have been telling are about acceptance and understanding, making the communities that collect around them warm and welcoming places for queer gamers. Though Supergiant’s person-centred narratives may sometimes be pulled along by a more traumatic undercurrent (looking at you, Transistor), the studio has become known for its kindness. For Kasavin, that’s not unintentional. 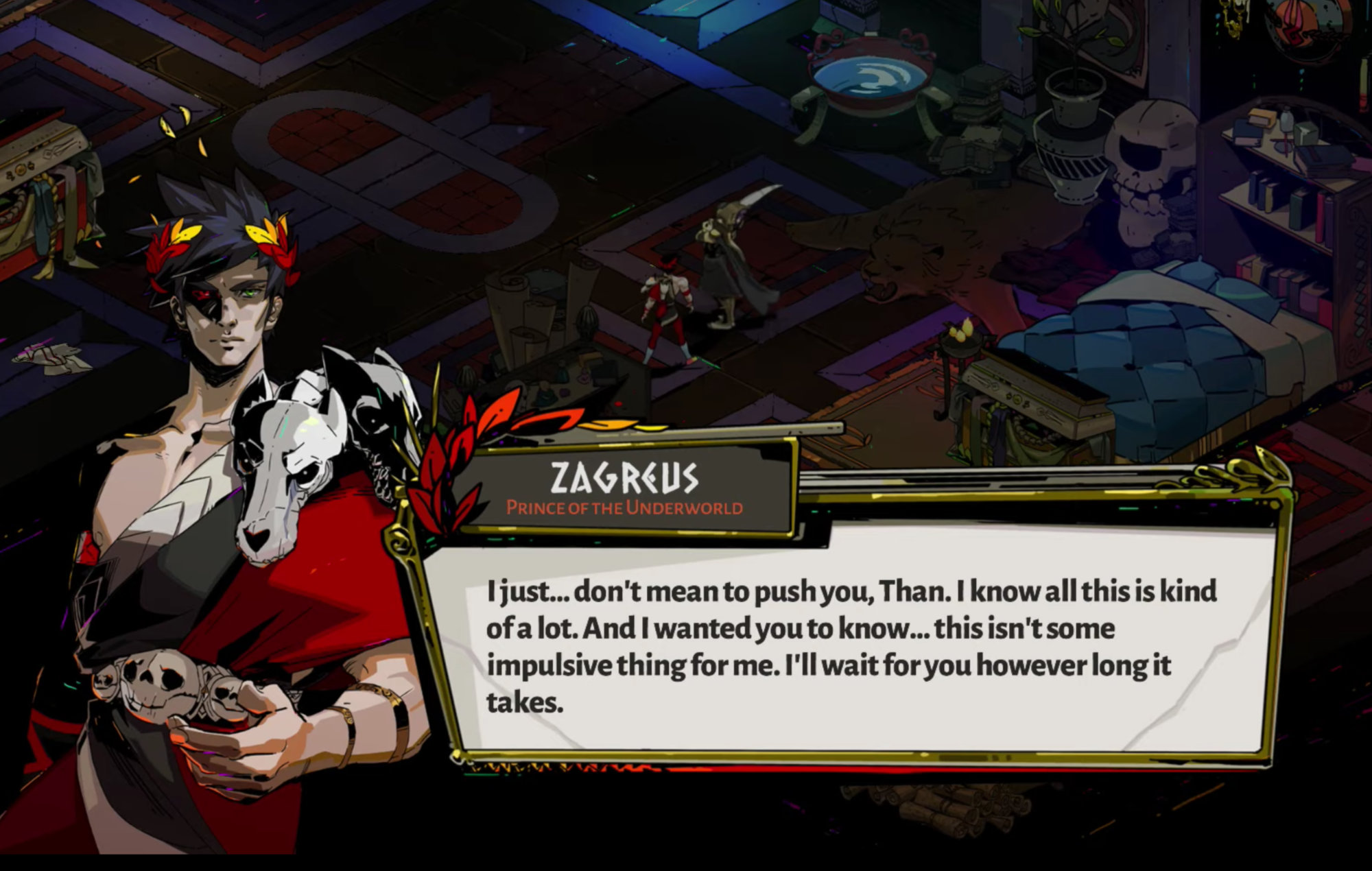 “As someone with a very pessimistic worldview in real life, I have no choice but to find a hopeful path forward in my writing. With something like Hades, it was an exploration into how these kinds of terrible family troubles could potentially be resolved over time. And there’s some irony to it: because these people are immortal and have limitless time. We ask whether, given unlimited time, you could work through issues and work things out, and we theorise that yes, you could.”

Representing polyamory and bisexuality without relying on harmful tropes has made Hades a game of the decade – let alone game of the year – for me personally, and I know anecdotally many other queer people feel the same way. It turns out, what I really needed from a game all these years, was a bisexual power fantasy that made me feel like a God. Who knew?

Hades is available now for the Nintendo Switch and PC. It launches for Xbox and PlayStation on August 13.