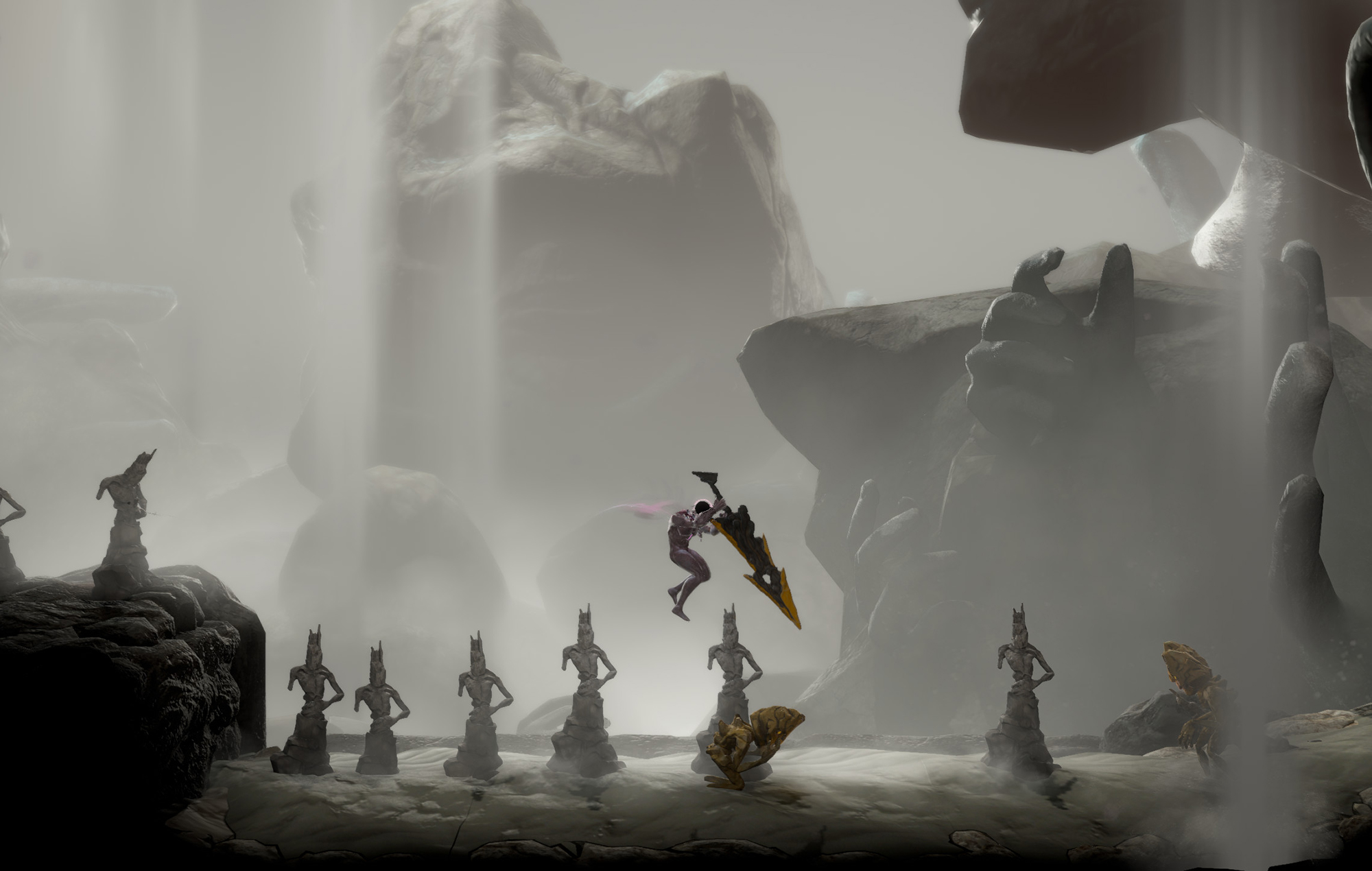 GRIME is a brutally difficult Metroidvania set in a world that is more twisted than its inhabitants. Every creature you come across is a warped version of what life should be. Each one is twisted by imperfections, whether perceived, or far more literal, and even the corridors themselves ooze with self-loathing. Pallid eyes in the rocks themselves follow your every move, and the denizens of the world hate you more than anything else, because you? You’re something different.

The landscape and the living things in Grime’s savage world have a lot in common. Gigantic fingers jut out of the earth as though they’re trying to escape, and haunting facial features lay shattered on the sands.

Even your character, who happens to have a black hole for a head, basically pulls themself together from the rocks around them. Everything in GRIME is pained, everything is a struggle, and life hasn’t so much found a way, as it has gotten lost after refusing to ask for directions. Life has stagnated and broken and forced its way into the rocks themselves like a weed through a pavement.

Naturally, this isn’t a game about finding the joy in life then, but one in which you’ll be struggling through brutal fight after brutal fight trying to find meaning. You awake in a strange cave, barely holding onto your physical form, desperately crawling forwards. This is the tutorial section, and it drums one thing into you above all else; you’re going to have to learn to absorb attacks.

Absorbing attacks is basically done in the same way as a parry in any other game. Here, however, you use your head to stave off the damage, and you also suck in whatever’s attacking you. This not only destroys the enemy, but also helps unlock new powers, and charges your Breath. Everything in this game, despite appearances, has Breath, and while the form is different for all of them, for you, it helps you heal yourself.

Thankfully, you do eventually find a weapon as well. It’s a bit like an axe, but the blade is made up of fingers that extend when using a heavy attack. Most of the weapons are this style of grotesque, with one even being a mace that basically screams when you use it. You can dodge too, and you’ll need to use all of your skills to survive against basically everything in the game that wants you dead.

As your venture through the world, you find obelisks you can merge with that act as your checkpoints along with places you can level up and upgrade your skills. They also let you level up, and it’s at this point it would be very easy to compare GRIME to Dark Souls, but I’d say it’s far closer to being like a 2D Sekiro. While you don’t have to string together parries to survive, learning to absorb attacks is going to help you out far more than just attacking.

You’ll come across many different kinds of monstrosities as you make your way through the horrors of GRIME, and you’ll need to learn different timings for each. Even the bosses can be absorbed with enough effort, no matter how large they are. Sure, they’ll often use far more attacks, and some of those are unblockable, but you’ll learn every twitch has a meaning here. It’s wonderful.

In fact, the game itself, despite being deeply uncomfortable, is a joy to play. Every new part of the world you chip away at is stunning in its own way; the rare moments where you converse with other beings reveal the depths of the terrors lurking in the world, and you’ll even find yourself conflicted about killing certain bosses. The first time I booted up GRIME to check it out, I had no intention of playing for more than twenty minutes; I just wanted to see the tutorial before bed. Instead, I spent the next three hours deeply engrossed in it.

It’s not just the combat, which is responsive, weighty, and disgustingly delightful, but the exploration and movement too. As you unlock new abilities, the world opens its maw ever wider, and you find yourself pulled on by new mysteries and curiosities at every turn. Every unturned stone should be investigated, and treasures hide everywhere.

At no point did I feel as though GRIME had anything but the utmost respect for both my ability and my time, and nothing makes me happier when that’s the case. I’m in love with this tortured world. I’m certain that everything here hates me, but I wouldn’t change it for a second. GRIME does an incredible job of making the uncomfortable feel right, and the wrong feel comfortable, and it’s nearly impossible to put down.

GRIME is available on PC and Stadia. We reviewed the PC version.

GRIME is such a consistently astounding game that it’s hard to believe it didn’t just fall out of the sky fully formed. The world it’s set in is one of the most compelling in recent memory, the combat is weighty, satisfying, and incredibly difficult, and the ecstatic feeling you get upon conquering some of the bigger challenges rivals the same feeling you get in a Dark Souls game.