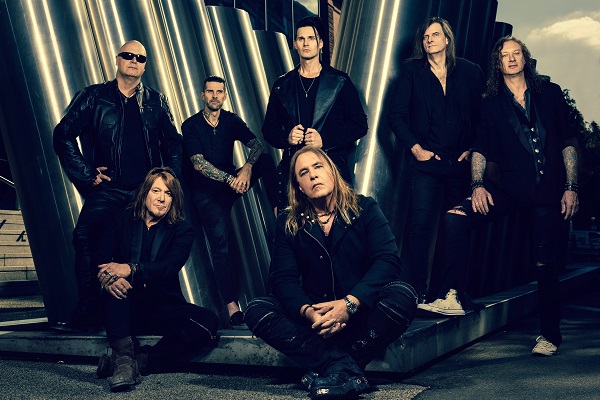 Interview: Michael Weikath of Helloween discusses the band’s new, self-titled release, and the inspiration behind it

In 2017, Helloween fans around the globe rejoiced to see the power metal band reunited for a tour with classic members Michael Kiske and Kai Hansen. This month, the German heavy metal band released a new, self-titled album via Nuclear Blast featuring those classic members, bringing Halloween to a truly full-circle experience.

Founding Helloween member Michael Weikath tells Anne Erickson of Audio Ink Radio that doing the global tour was a thrill. Moreover, the trek paved the way for Helloween to give the fans something even bigger- this new, 12-song record.

“We had the tour not knowing what would happen,” Weikath told Audio Ink Radio. “We seemed to have a great time during the rehearsals, and eventually, you had to go and prove that to yourself and the crowd, and that happened bigtime. It was a great thing. So, it kept going, and the three rows of people bursting into tears, and the same stuff happened to us, and we all had a great time.”

Helloween, in part, did the new album for the fans. “It’s something to be proud of, having that kind of response,” Weikath said. “It’s amazing. Lots of things could have gone wrong in the recording, but we continued recording and are very pleased with the outcome.”

As for Weikath’s best memory from reuniting with Helloween, he says the band’s Wacken Open Air show is a highlight: “It was all crazy and perfect. The Wacken show was filmed for a live DVD and Blu-ray, and it was the top. Not to diminish all the other shows we’ve done all over the country. People traveled far so they could see the next Helloween show the closest to them, and that means so much.”

“You have so many festivals, and I’m not talking about COVID-19, which is actually limiting everything I can think about, but under regular circumstances, you can see there has been more and more festivals, and more people are going there,” he says. “I never got that concept of being out in the wilderness with in a tent or something like that along with hundreds of thousands of other people, but people seem to enjoy that. Then, that kind of music given there, that’s like a wildfire. It’s getting more and more. It doesn’t stop. And so, if you want to connect that just to the type of music that’s being done, that’s metal. That whole thing. Rock music or call it anything you wish. That’s not going away so quick.”

He added, “There are a lot of kids who go there with their parents or uncle or whatever, and they find access to that stuff and love it. There’s the rave kids and people that want to hear techno and other stuff, but boy, this is still going on. It’s not being covered in the mainstream media so much as maybe in the ’80s, but maybe it was also a little bit too much back then. Maybe there are interest groups that don’t want to see something like that on regular TV, but it doesn’t matter, because people are going there, and they’re buying tickets, anyways.”

Helloween certainly helped shape the German and overall metal scene, but when asked about how he thinks the band has influenced the greater music world, Weikath is humble. He talks about the early days of combining rich melodies with heavy music and how that was a novel concept at first.

“It’s just when I had those ideas to take some anthemic melodies and whatever, we were listening to the Sex Pistols, ‘My Way.’ What was his name? The bass player. I just forgot right now. He did that thing ‘My Way,’ and I was going, this is something you can do,” Weikath said. “You can take great melodies and some distorted guitars and take it from there. Everybody was like, ‘No. You can’t do that. That’s impossible. You can’t.’”

“Then, there was Judas Priest with ‘Exciter’ and stuff like that, and you’re like, see, it’s possible, what you’re talking about. Why not do that?” he added. “Then, when we had that huge success that was obviously proof enough of that I wasn’t so wrong, so we just kept going, and eventually, it would catch up with young guys coming later doing the same kind of stuff because maybe that concept stuck in some people’s minds and, obviously, it works. Now, I’m really glad when there’s new projects or bands coming up doing the same, because then you can spread it all over the world to people who are interested in that stuff, and we’re proud of it.”

Listen to the full interview with Weikath on Apple Podcasts here and Spotify here.