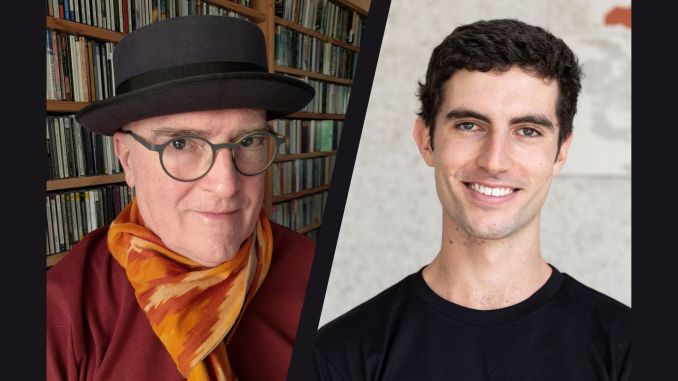 The Australian National Academy of Music has connected 67 musicians with 67 composers. The idea is to create a vast collection of new local music, which will represent who these artists are — and how they understand and perceive the world around them.

The ANAM Set unites these creative minds in a unique way, allowing them to work closely together as they build something new and long-lasting. In this interview, we chat with two such creative minds: Cian Malikides and Chris Dench. Cian is a trombonist at ANAM who has been collaborating with pro Australian composer Chris Dench on a new piece inspired by poetry, nature, and the instrument itself.

This September, Cian was scheduled to perform this world premiere in his ANAM recital. We’d like to extend our thoughts to all ANAM Musicians whose recitals have been postponed due to COVID, and who are looking forward to making live music together once again.

Cian, a huge congratulations on being part of The ANAM Set commissioning project. What does this project mean to you personally, and in this stage of your career?

CIAN: When I first heard about The ANAM Set, I was so excited that I would get to be part of it: 67 new Australian works all being premiered at ANAM! As a trombonist, I was particularly excited as we are always looking for our somewhat limited repertoire to be expanded. This was an area of my career that I always wanted to have, but didn’t expect to start for many years due to the usual logistical challenges of building a reputation, funding, and so on. I think it will be so great to expose audiences to what may be more challenging music, and have a piece I can say was written for me!

Fantastic! So tell us about the composition so far. What is your piece about?

CIAN: Chris Dench is an incredibly well-read and listened guy. I thought I had heard a decent amount of music til I visited his studio, which includes a vast library of CDs. Drawing from that, I am sure, he was inspired by the poems of the Martinican poet Aimé Césaire. The poem that inspired the ‘Caribbean crabe’ imagery that the piece is based on was Internonce in Moi, luminaire (1982).The particular movement of this crab reminded Chris of trombonists leaning back and playing to the sky.

Chris, this poetic inspiration led you to an interesting observation about the trombone. Tell us a bit about what you discovered and how you’ve worked this into your composition.

CHRIS: I’ve always found richness in the writings of Césaire, and one of his late poems had an image in it of the c’est-ma-faute-crabe – the it’s my fault, mea culpa crab. I did a bit of research and discovered that these crabs – so-called because the males have an asymmetrical, oversized dominant claw which they bang against their mantle in mating display – are actually members of the fiddler crab family. But in reality, especially when they fully extend their oversized claw, they most resemble a trombonist doing pavillon en l’air in seventh position.

This image stuck with me for decades, and I slowly nursed the plan of doing a crabe piece featuring trombone. I came close to realising this plan several times but only this year, with The ANAM Set and Cian, did it finally eventuate.

This vision, of the trombonist with his fully-extended slide pointing towards the ceiling, is at the core of my piece, which I named after a line in the poem, un petit mot crabe-c’est-ma-faute. I have used movement of the bell as a significant gesture in the music, and tried to imagine an appropriately contextual soundworld.

The poem is evocative of the salty tang of a tidal pool, and to transmit that sense I have added a percussionist to the mix, mainly making untuned sounds with things like claves, ceramic bowl and tile, ratchet, guero, whip. Matching trombone and percussion sounds has been one of the pleasures of writing this piece.

You must have extraordinary insight into all the instruments for which you compose. Beyond the crabe, how has your career opened your eyes and ears to the needs of brass players in particular? And how are you imparting this knowledge to Cian through this project?

CHRIS: I’m known mainly for writing flute and clarinet pieces, I suspect, although I just wrote a big bassoon piece. Brass, however, have never figured large in my life — something I’ve always regretted.

Since coming to Australia in 1989, I have had little access to brass, and I can only think of about three of the 60-or-so pieces I’ve written since then that involve brass at all. So it’s a real pleasure to get to write for trombone again after such a long gap.

Trombone and percussion, though, is, I hope, a growth ensemble. I know of pieces for that line-up written for ELISION, and the Melbourne-based Ossicle Duo, are quietly building a substantial similar repertoire. So I feel like I am helping the development of a really promising genre.

I think the main way my awareness of the modern trombone idiom is being transmitted to Cian is directly through the music, as a primer, perhaps. Certainly, I hope that after learning my piece he will be equipped to deal with any other work in a similar vein that he might encounter.

I’ve from the word go requested that he provide feedback on the music, and question anything that might be dubious.

Cian, what has it meant to you that you can communicate to the composer about your instrument?

CIAN: Talking about the instrument is of course a completely natural part of the collaborative process between musician and composer. I have to make the distinction that the limits of the trombone are far less that my own limitations on it. Being realistic with Chris about my abilities has been important as I am the one with the responsibility of giving the premiere.

That being said, the piece is still by far the most challenging I have ever tackled. At first glance of the score, I will admit I was terrified. However, as it becomes more familiar, I realise how well Chris has done writing for the instrument.

This work is so much based in your abilities to understand each other’s musical approaches. But when you’ve been unable to meet in person, how has this affected the collaboration? How have you pieced together the puzzle of working via distance?

CIAN: The string of Victorian lockdowns have made working on the piece really difficult for us. With ANAM at the Abbotsford Convent this year, and Chris living in Ballarat, the travel restrictions have made meeting up very rare! To counter this, we have maintained email contact and I occasionally send Chris clips of my practise. It will be good to work together in the same room again!

CHRIS: We had the opportunity to meet once, in my studio, so Cian and I had a chance to get each other’s measure, which will unquestionably inform how the performance pans out. At that stage, we built up a certain amount of momentum, only to have it nosedive with the recent series of lockdowns.

These periods of house arrest do not impact on me significantly — being a composer has always consisted of sitting alone for long periods — but I know it has been dispiriting for many. I don’t think Cian and I will recapture that initial energy until we can meet again and actively wrangle the music. But he sends me soundfiles, and in all honesty, they are so good that I have no concerns; I have not needed to make any remarks at all. Reminds me how lovely an instrument the trombone is, too.

I imagine that he will systematically work through the piece, and after our suspended animation comes to an end, we’ll resume jointly sculpting the music in whatever fashion turns out to work best, and ultimately get the percussionist into the conversation as well.

Cian, how would you say your relationship as composer-musician has influenced or inspired the way you see yourself in the music industry in a broader sense? That is, how will you take what you’ve learnt, and have this knowledge enrich your future experiences?

CIAN: The ANAM Set has given me the opportunity to collaborate with a composer far sooner than I had hoped. I think this is such an important and unique experience for everyone at ANAM this year and, hopefully for us all, it brings on a generation of young Australian musicians passionate about new music and working with composers.

What do you hope will be the impact of your collaboration?

CHRIS: Selfishly, for me the primary outcome is that I got to write a piece I’d been longing to do, and even — touch wood — hear it! It’s immodest I know, but I hope that giving the première will really enhance Cian’s reputation. Playing a work like this could be quite a big deal!

More broadly, I hope that it gives Cian the confidence and expertise to take on more works in the style – if he finds he likes it enough! – in future. Composers need such players, as do orchestras, and ensembles. Having that breadth of experience is still a pretty singular accomplishment, even today.

More generally, I was interested to be part of The ANAM Set because it is truly a once-in-a-generation project, the creation of a repertoire for the future. Here, uniquely, is a cross-sectional portrait of working Australian composers, from the young right through to me, coincidentally a 67-year-old among the 67 composers chosen. But, further, The ANAM Set is also cross-sectional for the orchestral instrumentarium, so that future contrabassists or tuba-players will have decent Australian music to program.

Musicologists, performers, and music-lovers will all have reason to thank ANAM as time rolls on. Maybe this could become a once-a-decade project? Imagine a historian of Australian music in a hundred years’ time, with a sequence of such cross-sections to call upon? What might they discover?!

Visit the ANAM website to keep up to date on this commission, and to learn about The ANAM Set.

READ MORE: Could this be Australia’s biggest-ever commissioning project?