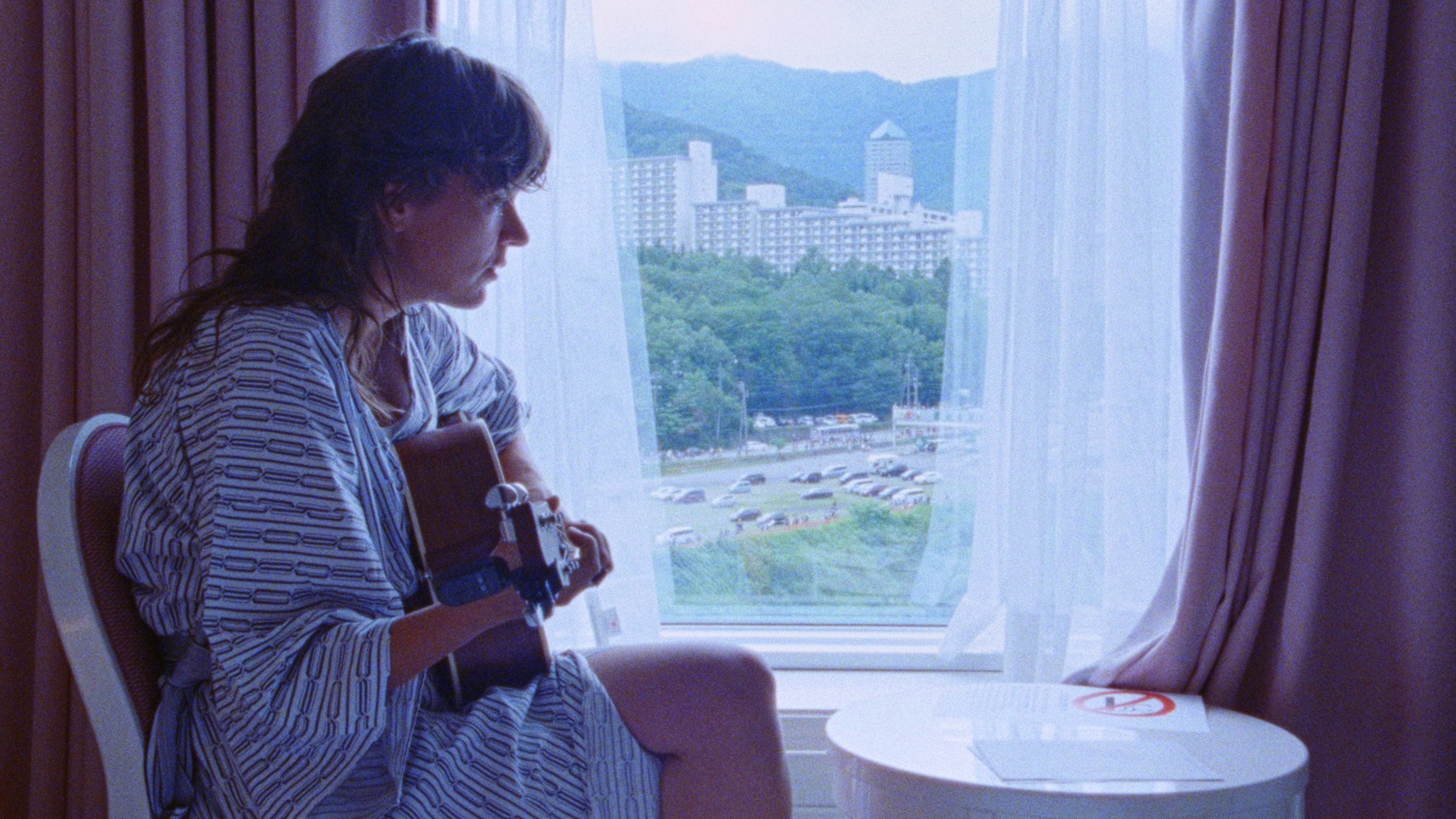 “I never wanted the film to be too music-heavy,” says Danny Cohen. The Melbourne-based director is reflecting on his first feature-length documentary, Anonymous Club, an up-close-and-personal portrayal of Courtney Barnett.

There’s still plenty of music in Anonymous Club, but Cohen’s essayist documentary is really distinguished by the magnifying glass it puts on the thought processes of the world-renowned indie rock artist. Against a backdrop of adoring crowds and picturesque roadside landscapes, Cohen captures Barnett struggling to overcome a creative lull. Her connection to making and performing music wavers, leaving her increasingly anguished: At one point, she laments, “I don’t know what the fuck I’m talking about anymore. I don’t understand the point of talking about my feelings.”

While Cohen consolidated “around 60,000 feet” of rich 16mm Kodak film shot over three years, cutting 25 to 30 hours of footage to a slim 83 minutes, Barnett supplied him an audio diary, which narrates the film. Listening to that diary exposed Cohen, an established collaborator and close friend of Barnett’s, to “a side of Courtney I didn’t know”. He adds, “I knew she had a lot of depth, but I didn’t know that she felt that way. Hearing her talk like that, it moved me. I really connected with it.”

Named after one of Barnett’s softer tracks first released in 2010, Anonymous Club unveils an honest, gentle dialogue between two creatives – and gives fans a sneak peek at the making of Barnett’s third studio album, ‘Things Take Time, Take Time’, which is set to be released on November 12.

In conversation with NME over the phone, Cohen tells us how he made the documentary, which is slated to premiere at Melbourne International Film Festival next week.

“I tried to not watch too many [documentaries] going into it, because I wanted to riff on my own idea and try not to be influenced too much. But Don’t Look Back [directed by D. A. Pennebaker] was definitely the starting point for reference, for sure. You start as a fly on the wall, but then realise you’re a little bit more in those moments than you think you are.”

“I gave her a Dictaphone because she can be particularly shy on camera and in interviews. You can see that in the film. I don’t blame her, of course. It’s not easy… I feel like [the Dictaphone gave] her an outlet to be more open and honest and take her time getting to the point she wants to get to, without the pressure of the camera being on her. And I gave her instructions: ‘If it makes it feel more comfortable, speak like you’re talking to me on the phone’.”

In turn, Cohen kept his own audio diary to share with Barnett

“I started keeping my own Dictaphone to give to Courtney, not to be used in the film at all, but just as like, a two-way street – to show that I’m opening up just as much as she is and to give her the confidence that we trust each other.

“I did that for a little while, not long, but enough to get the feeling of what she was going through, in terms of how difficult it is to just sit there and talk your thoughts out loud. Usually those thoughts are just running through your head and you process them in your own way, but to sit and verbalise them, and also verbalising them with the idea that they might be used and seen by X amount of people, is really confronting.”

“Very early on we talked and Courtney said, ‘Whatever you want to film, let’s film, and I’ll tell you if it’s too much.’ [And that] was definitely something that happened after 30 weeks of filming. She’d be warming up or be alone in the green room before a show, and [I’d be] thinking, ‘OK, this is obviously great footage to capture, but she does need this time to be alone to be able to prepare the way she does prepare for a gig.’ But I think we are so close that it wasn’t a problem, and she welcomed it.

“It felt like I was filming a close friend and finding a story within their story, or trying to tell their story, and I think after a while that’s really draining, because this is just your friend that’s going through all this stuff, and you’re making a film about it. It’s a weird dynamic. I think we are both excited to hang out together and not be filming.”

The title ‘Anonymous Club’ speaks both to Courtney’s old music and her new material, which is “much gentler, much softer”

“She heard [the song] ‘Anonymous Club’, I think on a TV show or a film, and she was like, ‘Wow, I sounded so young. I didn’t even recognise the voice that much.’ It’s such a different time.

“It sounds like you’re alone, but you’re not alone – that’s my interpretation of the song. It’s kind of like what she says at the beginning of the film: if a lot of people are alone, maybe they’re not so alone together.

“Another friend, who I was talking to about titles, he said that [in the film Barnett] feels like a ghost. She’s popping up in different locations around the world. You’ll see her in a hotel room here or you’ll see her walking there, and it’s quite a solitary existence, or it seems like it in the film. ‘Anonymous Club’ captures the right mood and tone.”

Barnett hopes Anonymous Club will inspire, stir conversation, or help others – and Cohen echoes these sentiments

“It helped me when I made the film, hearing Courtney talk about a range of topics the way she did and how vulnerable she was. That was really inspiring as an artist. And I know that those anxieties and the fears and ideas she has are not just creative. Everyone has those fears.

“And I think it’s because Courtney is so relatable and so down to earth and so humble, when she talks about these things, it’s kind of like her songs: you’re drawn in. She has interesting ideas and the way she thinks about certain topics makes you think about it yourself, and I think she can help [people] find solace in some of those bigger questions out there. So, if a film can do that, that’s really special.”