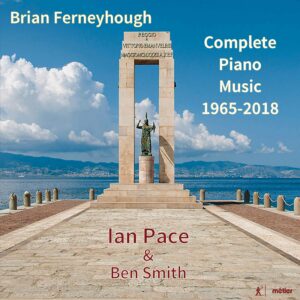 The Anatomy of Melancholy

Ian Pace is one of the finest interpreters of complex contemporary music currently active. Two recent recordings of music by British composers of exquisitely intricate scores – Brian Ferneyhough and Marc Yeats – serve to further cement his reputation as the go-to artist for this repertoire.

Brian Ferneyhough studied with Klaus Huber and others, but a great deal of his early work in the 1960s consisted of autodidactical pieces. Invention, Epigrams, Three Pieces, and Sonata for Two Pianos all date from 1965-’67 and fall into this framework. Apart from the sonata, they are aphoristic creations, dealing with the surface textures of total serialists Boulez and Stockhausen but with a more intuitive approach to construction. Joined by Ben Smith, Pace underscores the vivid dynamic contrasts and registral stratification of Sonata for Two Pianos.

By 1980, Ferneyhough’s reputation had been enhanced from prodigious emerging talent to that of one of Europe’s pivotal figures. The New Complexity tag was coined for his work and that of a few other composers (Michael Finnissy, Chris Dench, and James Dillon prominent among them). However dubious and reductive any stylistic pigeonhole may be, Ferneyhough has created scores of exacting technical difficulty and interpretative requirements. A watershed work in this regard is 1981’s Lemma-Icon-Epigram, which Pace first performed while a student at the Juilliard School in the early 1990s and has presented many times since. Ferneyhough has suggested that the sixteenth century poetic form the Emblema provided a formal design for the work, with references between the movements culminating in the hyper-distillation of its Epigram.

Three excerpts from Shadow (Opus contra naturam) are reconfigured from the opera Shadowtime. In his note, Ferneyhough suggests a Liberace or Joker styled performance, one that allows for the piece’s abundant virtuosity and periodic vocalizations to take on a kind of macabre lightness.

Quirl is Ferneyhough’s most intricate piano score to date, with a self-similar rhythmic structure based on fractal geometry from which are deployed gestures within gestures in a whorl of activity (hence the title). There is also a renewed interest in linear counterpoint reflective of the composer’s exploration over the past two decades of Renaissance music. El Rey de Calabria (2019) provides a brief recapitulation of Ferneyhough’s early style. The piece is an affectionate remembrance of his family’s three-legged cat.

Pace’s program essay on Ferneyhough’s piano music acknowledges the difficulties of realizing its notation while strenuously rebutting the notion that it is impossible to play accurately or perversely written to look more complex than will actually be realized. The pianist underscores the increasing number of performers who convincingly present  Ferneyhough’s music. He suggests that his own journey with the scores has been an evolving one, with the current recordings a snapshot of his understanding of their rich details.

Marc Yeats specializes in polymetric composition, using multiple meters in an asynchronous fashion in pieces for large ensemble and layering polyrhythmic designs in solo works. Yeats takes the polyrhythmic investigations of Elliott Carter and Conlon Nancarrow and puts them on steroids. His piano pieces are in single movement design, ranging from 10 to 18 minutes in duration. Dense and detailed, dynamic extremes, formidable technical challenges, and mercurial gestures with sharp turns in demeanor make Yeats’s music a daunting prospect for performers.

However, Pace supplies powerful and extraordinarily detailed renderings, once again making the case for the playability and interpretive potential of tremendously complex music. Each piece is distinctive. Particularly memorable are the whipsnap contrasts of Enûma Eliš, the delicate and rhythmically supple lines in Ouroboros, and the layered structure of the title work. Yeats has a strongly individual voice, and he effectively ups the ante on complexity.