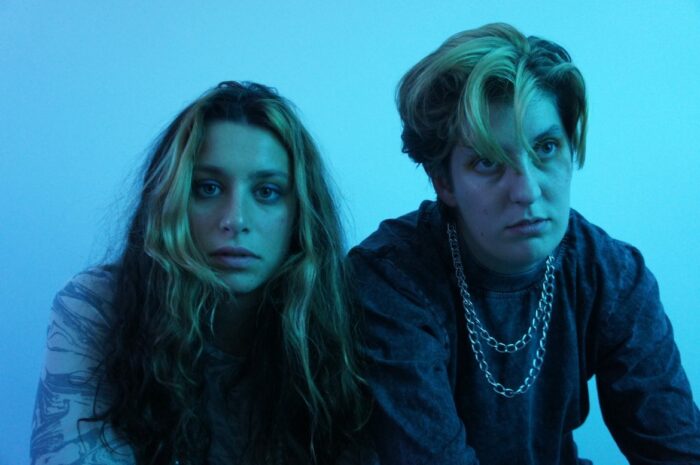 When I was younger, my mom always made these elaborate holiday spreads. She’d snap a picture of each food before we ate, capturing every angle; a few standing on a living room chair, a few sitting with her back straight to accent the concave of the plates, another handful with me and my brother smiling briefly, an aerial view, one with flash, and a few without. It’s pure, looking back at it. Because like listening to music, I find a similar joy of basking in one art and sharing the patience for a song to flourish. You learn how to listen better, I think. But in those moments, I just wanted to dive in and enjoy the meal. And that’s the type of music Boyish makes. They want people obsessed upon the first listen without holding out for too long. It’s about soaring past the patient, contemplative parts of the music and connecting with their audience on the first bite.

Originally from Boston, Boyish consists of India Shore (vocals) and Claire Altendahl (vocals/guitar). When playing live, they have Aleksi Godard (drums), Sylvie Chang (backup vocals), and Jules Chappert (bass). Altendahl and Shore started writing their new EP we’re all gonna die, but here’s my contribution in April 2020. It was a month into a national lockdown sustained on nothing but dreadful days of unpredictability. Altendahl was in Minnesota while Shore stayed in Brooklyn. Together, they communicated sprouts of their work through wav. files. A few months later, Shore traveled to Minnesota to write their first single “Superstar” with Altendahl in their home studio, along with the rest of the EP they slowly brought to life.

A drastic change in sound registers in the new record. Inspired by wanting to build a quarantine-type project, the duo didn’t want the stories told in each song to be about what was presently happening. “[The album] is about looking for other forms of inspiration,” said Shore. “And giving ourselves a challenge by creating one world or experience.” we’re all gonna die, but here’s my contribution presents itself as a mantlepiece for repainting the pasts and soaking within a few thickened layers of nostalgia. First crushes and intensity of an obsession often feel like faraway feelings even in your 20s, and especially so a year and a half whirlpooling in a pandemic.

When making the record, the duo was keen in capturing perfect moments without hesitation or plan. For instance, right before the chorus launches into their song, “Your Best Friend” there’s this shifting noise from a field recording. “We were recording demo vocals in my room in Minnesota and I had my window open and there was a truck slamming the gate shut, almost perfectly in time,” said Altendahl. Straying away from their older work, greater emotional vulnerability glows in the new EP. It’s because the pair didn’t root their priorities in how they’ll fare at a show. In the past, the excitement of a live set enveloped itself with rattling beer bottles, popping laughter, and an inability to see someone completely in a clang of a party. In turn, emotive parts of the song were lost somewhere in-between, like an eggshell dropped in a pot of chili.

For future shows though, the pair plans to expand their sets by trying on the new. Together, they choreographed “Fuck You Heather” and collapsed to the floor, practicing the skit beforehand to make it look spontaneous.“I love to program bass drops in our sets, and the feeling of the stage shaking beneath us,” Altendahl told me, laughing. “People feel things differently through speakers than they would listen through a headset.” This is true. All three of us agreed: give the audience something they’re not going to get by just listening at home.

Towards the end of the interview, we discussed a moment within a moment during their musical career that upheld its magic, a year and a half into a world without shows. “It was the first show we played where people really showed up,” Altendahl told me. Up until that point, there were a lot of empty rooms to the point where the walls echoed. But there sat something special about the first full room where people were present to see them. The crowd sung lyrics back at them. They were on the verge of tears. To Shore and Altendahl, the best part was that they didn’t even expect it. It’s the type of music that survives on humility. Besides keeping Phoebe Bridgers in business by buying all her merch, Altendahl and Shore remain humble, plot for their dream tour with Phoebe or girlinred, and maintain an ability to surprise.

we’re all gonna die, but here’s my contribution is out now