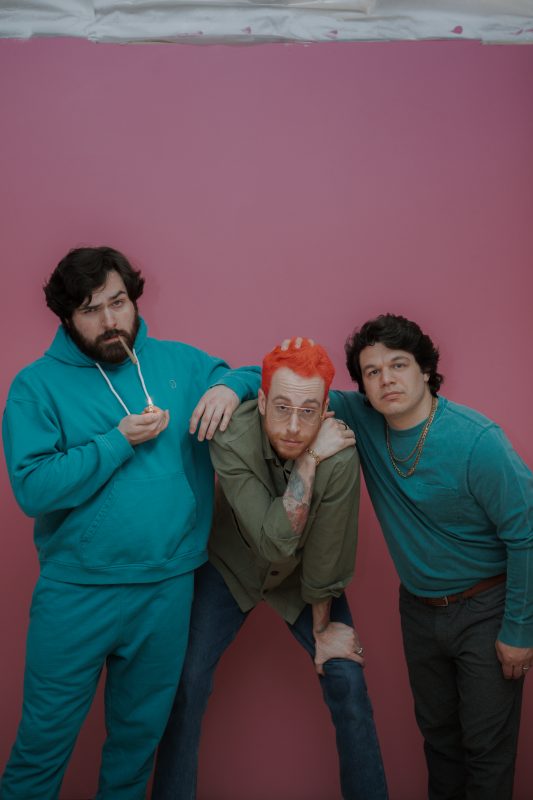 Grasser, a three-piece indie-pop project based in Asbury Park, New Jersey is new in the game of sweating out multiple genres and still making it work. Consisting of cousins Biff Swenson and Nick Gianatiempo, the band started as a duo before adding solo artist and long-time friend Dana Yurcisin to the mix. In 2019, the trio recorded their LP Later Registration.

Get Real, Quick!, the band’s latest, is another beast, though. The album shares elements of Swenson’s love for “hip-hop and verbose wordplay, Yurcisin’s ear for production and texture, and Gianatiempo’s studio chops and guitar heroics,” as noted in their band bio. “It’s the sound of things falling apart, sure, but it’s also the sound of something finally coming together, albeit in the most unpredictable and fucked-up fashion imaginable. It’s the only way these three would have it.”

I had the pleasure and honor and to catch up with Yurcisin, Swenson, and Gianatiempo on how their album came together through decade-old demos and their strong friendships tapped through intense collaboration. Get Real, Quick! is as impressive and unexpected as the title suggests; each corner is a surprise of hip-hop bathed in synth overtones and traditional rock melodies. In its full shell, the album is an emblem of great friendship; no matter how much is in there, it works because the balance exists.

Can you tell me a bit about what inspired this album?

Biff: It was the first time working with Dana and the recording process showed us a bunch of ways we could be making music we haven’t tried before. When quarantine started, we all hunkered down together and lived together for 2 months. We didn’t say no to any ideas. We let ourselves be heard and bent our comfort levels in each direction.

Dana: We took everyone’s demos we had leftover from other bands, whatever style.

Nick: We used demos from almost 15 years ago.

Dana: Nick will be like ‘Oh, we have this song from 2009, and I can write an outro to this, smash them together and see if it works.

All three of your contributed old demos?

Biff: Yes. And we all played a bit every instrument. We didn’t want anything to sound the same and wanted to make sure everything had different voicings.

Can you tell me a bit about what it was like to live together? Were there any special recording moments?

Biff: Recording was tough. It was probably the least amount of fun we had doing anything together. We’re all high-stress workers. We also shot 3-4 music videos during that time, which was the most fun.

I completely understand. When I was recording with my band, it was so hard for some reason, no matter how well you thought you knew your parts.

Nick: We would wake up, do yoga, and record until 3:30. Every day, we’d host our 420 live sessions with our Instagram followers. Then we’d relax for the rest of the day. Dana and I are very high-strung perfectionists.

Dana: A lot of the fun stuff was a lot of the sessions pre-COVID when we didn’t have a timeline or any pressure. I’d come over, play some bass, and write some guitar. But during COVID, we had to do all vocals and finish them by end of quarantine so we had the album in the can.

Biff: We had to finish this album before we parted ways.

Do you feel like if it wasn’t COVID, you wouldn’t have been completed the album in the way you did?

Biff: It wouldn’t have been so quick. We committed all our free time to each other as we all worked from home.

I’ve interviewed a bunch of bands who recorded their albums in COVID and I’ve received two ends of it. Some say they had so much time, too much that they went back to fix and nitpick things, and then some bands thought this was the time to do it. Anyways, unrelated, but I read on your bio that your music is a blend of hip-hop, 2000s punk. Can you talk a bit about that fusion?

Biff: Before Dana worked with us, our music was very math-y and noodly, like pop-punk meets post-punk. With this album, it’s everything anyone wants to do. And more hip-hop than rock. A lot of rock bands miss the mark with me because so much of it is overproduced. Cymbals and distortion are harsh on your ears.

Nick: We wanted to appease as many people as possible, and also getting our music to be radio-friendly.

Biff: Plus still being super experimental and jumping all over the place. I’ll listen to hip-hop then hardcore the lo-fi. It’s important for us to feel nothing’s stagnant.

That’s so true. I feel like there are so many bands that are so good but they sound like the band next door.

Dana: I always say that we’re an LA band in New Jersey. We don’t fit into any scene around here, but I don’t mind that. I think it’s cool.

Are y’all from NJ?

And have you played shows with this new LP yet?

Biff: We haven’t, but our live band will be a bit more extensive than anything we’ve done.

Do you think you’re the type of band that wants the live performance to differ from their recording?

Nick: We kind of know and accept that’s going to be a thing. We know it’s not going to be the same as the record, and we’re okay with that.

Dana: Right, it’s more about retaining the spirit than making sure every note is there.

Nick: That’s a big thing for me too. One of my biggest gripes is seeing a band sounding exactly like the records.

What’s most important to you when you start writing a song?

Dana: Rhythm and melody. Everything comes later. It needs to feel natural and have bounce. Since making music with Biff and experimenting with more hip-hop and R&B, its got to have a good bounce.

Biff: Lyrics and cadences. Half the album was written as rap songs. We then deconstructed the original idea to morph it into something else. And figured out which pockets the cadences fit in-between. Dana buttered them up.

Nick: Dana is big on melodies, Biff is big cadences, and I’m big on drums and bass and getting them to flow sonically together. This record is left-field from Biff’s style of noticeable drumming.

It looks like you all have an organized type of chaos writing songs together. When you play live, do you think you’ll do any improv, or do you all have your concrete parts?

Biff: I hope we can play to backing tracks.

Dana: I get real practiced, or I get so nervous. We still want it to be fun.

Biff: I blackout live, and it’s kind of an out-of-body experience. Improvising or throwing a wrench in the wheel would throw me off.

Dana: It’s like having a good plan allows for more chaos.

Are there any bands, mostly local, you want to shout out?

Dana: I hate to be biased Little Hag rips. I wouldn’t butter her up as much as I do if I didn’t love it this hard.

Get Real, Quick! is out now on Byrdhouse Records.