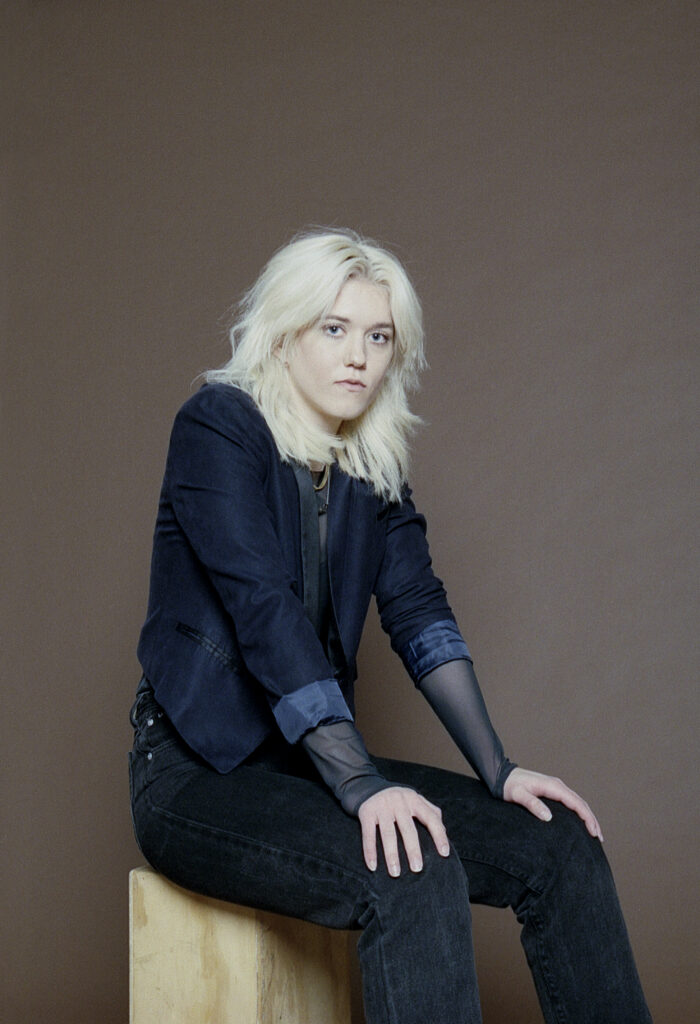 Chicago-based singer-songwriter Jessica Mindrum knows herself a bit more these days. Witnessing the death of her grandmother, uncle, and beloved dog Chatham amid a global pandemic, the hard shove of loss molded urgency. A gap in time and disconnect paved paths in crystallizing verses in her sophomore EP Restart, Begin. Before diving into her latest collection of songs, we backstroked into her past when things were simpler. Her love for music began in 2008—it was the year of Flip camcorders, Juno, and Taylor Swift’s Fearless. Mindrum picked up guitar and sat in bed with headphones in. The following year, she dropped out of her high school musical to pursue music. Like many of us, she obsessed over music like a child trying to learn a skill. This dedication nurtured a type of relentlessness—one that granted permission to surprise yourself.

When I asked her about her earliest inspirations, particularly one of the first times she connected with music, she prefaced with “this is a little embarrassing,” and laughed. “I grew up listening to Coldplay,” she recalled. “The culture surrounding that band put me on a path. I was listening to “Fix You” by myself in an attic room, in that dusty sort of attic-y smell. I just started sobbing.” An initial listen can’t be replicated because things are only new once. Though love for that music can be sustained, or more realistically, revived in a way that only comes with age.

Mindrum grew up in an academic family. Her siblings worked as consultants and lawyers. Like most people raised in a household that followed a traditional career trajectory, the plan was tacit, but clear at the same time. It was to excel at school and secure a job that guaranteed a lofty paycheck. Making music full-time lived outside of Mindrum’s parents’ realm of understanding, perhaps because it held too many hands open for uncertainty, like driving without windshield wipers in a rainstorm. However, with Mindrum’s latest dedication to the art, the unexpected filled spaces that she probably couldn’t commit to if all her energy gave into a job that offered a no-frills security.

In Restart, Begin, Mindrum explores her griefs compounded by the pandemic. “The word I kept going back to was immersive, and also haunting,” she said. Tracks package themselves in synth overtones and memorable choruses. Each creeping piano lead sounds like tiptoed footsteps on a staircase. This is all wrapped neatly with Mindrum’s voice guiding the instrumentals along. It’s just enough that you feel its presence without being overwhelmed with it, like knowing people are sitting in the backseat of your car. Even with layers and fingerpicking in open tunings, the songs still left room for that gritty demo-like edge. A lot of her work stems from Gia Margaret’s debut album There’s Always Glimmer and Brooke Bentham’s collection Sunday Self, which contains raw guitar and voice under strong melodies. As of late, Mindrum has been listening to 2008 Kings of Leon, Taylor Swift, Dua Lipa, and Ariana Grande.

With her debut EP Flickerings, Mindrum didn’t open her door too wide for the production side of things, like doubling vocals, harmonizing, or layering instruments. There was less experimentation and more certainty, which does have perks of clarity and safety. But what was missing was a surprise of an end vision. It’s something you didn’t even know you wanted when you started. Restart, Begin is a measurable upgrade for sure, but both records hold an important quality of growth. “I don’t like listening to [my first EP],” she said. “I don’t know her, sorry not me,” she laughed, gesturing her hands in an outward pushing motion. With this release, Mindrum isn’t just putting out music. She’s finding refreshing confidence within herself. “I need to have this feeling all the time because if I don’t then what’s the point,” she ended.

In some other universe, I wish Mindrum made this album ten years ago. The thoughtfulness of sifting through this world, undisturbed yet loud, when everything’s quiet is something she knows how to do well. I imagine laying my head on a crush’s shoulder, each of us with one cheap headphone in our ear. Clinging onto the excitement of a forbidden cigarette, we listen in silence outside an empty subway station, waiting for the last train left in the night to come.

Restart, Begin is out now, engineered by Rick Fritz and produced by Joe George, with cover art by Rachel Blanco