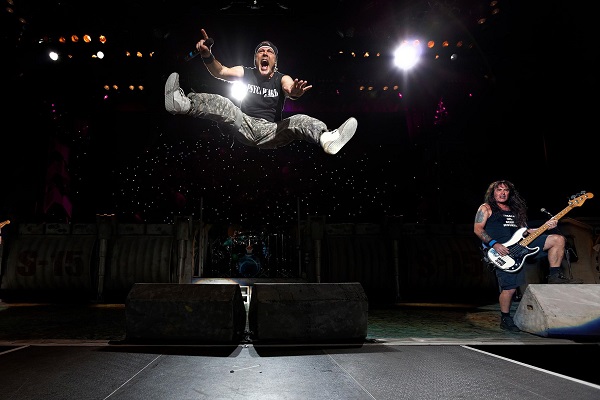 Iron Maiden didn’t hit No. 1 on the Billboard 200 with “Senjutsu,” but they landed their highest-charting record on the chart to date

Iron Maiden have scored their highest album chart spot ever with the metal band’s new album, “Senjutsu,” which debuted at No. 3 on the Billboard 200 chart this week. The Bruce Dickinson-fronted group released its 17th studio album on Sept. 3, buoyed by lead single “The Writing on the Wall,” which has raked up more than 12 million YouTube views for the song’s music video.

Iron Maiden have reached the top five on the Billboard 200 before, but being No. 3 is a first. According to Billboard, the band’s 2015 release “The Book of Souls” and 2010 set “Final Frontier” both reached No. 4 on the chart. “Senjutsu” is also Iron Maiden’s 15th album to make the top 40 on the Billboard 200, starting with 1982’s “The Number of the Beast” through today. Four of their studio albums have reached the top 10.

On the Billboard 200 chart, Iron Maiden only came behind rapper Drake at No. 1 for his latest release, “Certified Lover Boy,” and rapper Kanye West at No. 2 for Donda, the latter of which fell from No. 1 last week. Iron Maiden fared well in their home country of the U.K., to boot, scoring a No. 2 album right behind Drake.

Iron Maiden also enjoyed second-biggest sales week in the U.S. in 2021 for a hard rock/metal album, the No. 1 sales week being Foo Fighters and their new album, “Medicine at Midnight.” Read Audio Ink Radio’s track-by-track review of “Senjutsu” here.