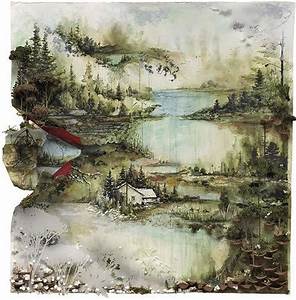 On Justin Vernon’s second LP, Bon Iver, Vernon takes more sonic risks that are greatly rewarded. The depth of sound and range of instrumentals creates an engulfing and serene landscape that earned the group a Grammy in 2012. Now ten years after its release, what Vernon and company created is hauntingly brilliant. They’ve created a diverse range of instrumentals while still communicating the sadness that Bon Iver brought on their first LP, For Emma. Bon Iver is releasing a 10th Anniversary repressing of the record with bonus tracks and an essay by the much-loved Phoebe Bridgers. There’s a reason for the allure and comfort of revisiting Bon Iver.

The opening track, “Perth” begins with some fingerpicking. A guitar tone is rich with reverb and softness that we hear throughout the record. Around the 40-second mark, it gets louder and invites the signature, ripe, and crisp marching band drums that cut through the weighted tone of the guitar. The vocals are then introduced, including Vernon’s falsetto, a quality that evokes pain. It’s not an easy range at times to achieve, and we can hear it through Vernon’s attempts to reach those higher notes and create a breathy release of words. Although he does use some vocal effects, and the way his vocal quality translates through the effects is still something to remark. A drum breakdown and addition of strings at around the 2:30 mark drive the track home. Adding conflicting tonal qualities between the rock-influenced guitars and the pungent brass that accompanies the bright percussion. They all play a part in creating that signature Bon Iver sound, which is one that teeters between rock and folk.

The most-played and possibly a more well-known Bon Iver track is “Holocene.” It’s a harrowing one that has a lot of clout for a reason. An acoustic guitar at the beginning accompanied by whining guitars in the background tell you exactly the kind of juxtaposition Vernon’s lyrics give. He spoke about the “Holocene” to Mojo Magazine saying, “It’s partly named after the (geological) era, but it’s also the name of a bar in Portland where I had a dark night of the soul…The title is a metaphor for when you’re not doing well. But it’s also a song about redemption and realizing that you’re worth something; that you’re special and not special at the same time.” Lyrics are broken down into three core verses that are interpreted as three stages of Vernon’s life. As the track grows, it includes xylophone, percussion, and brass, following a lyrical growth of Vernon’s life into adulthood. It’s quite genius songwriting in how it builds and allows for every element to play a key role.

Some other tracks on the record such as “Michicant” and “Wash” showcase control Bon Iver has in how they arrange their instrumentals. On both tracks, there aren’t many instrumentals. It’s mostly one instrument and Vernon’s vocals. Both tracks could have followed the lead of “Perth” and “Holocene,” building the sound further and further as each track developed, but instead, instrumentals are subtler. They appear now and again for texture but mostly keep the same melodic tone throughout the tracks. It’s admirable to know when and when not to go all out on instrumentals. For some artists, it’s easy to add on a bunch of effects and blow out the sound but for Bon Iver, they have control and precision when it comes to songwriting. They know how to make a track faint yet have enough to be just right. It’s this kind of carefulness and ease that makes Bon Iver a terrific record to listen to from start to finish.

Closing track “Beth/Rest” is a unique departure from the more guitar-driven tracks on the record. First, Vernon’s vocals are heavily autotuned; something we see more of on the band’s future records. It’s an interesting choice as Vernon’s falsetto is less noticeable. Notes have a deeper range with the effects and mask his actual voice. In addition, “Beth/Rest” primarily consists of a synthesizer, and no real instruments (i.e. drums) are used. Some guitar is introduced midway through the track, but it still follows the tonal theme of distorted or affected instrumentals rather than the more raw sounds we heard in previous tracks. Interestingly, Vernon chose to use this style as the closer considering what his next few records would be like in the future.

Overall, Bon Iver stands alone in the artist’s discography. It’s a real bridging record between a more humble and acoustic-driven sound on For Emma and then their next release nearly 5 years later, 22, A Million. Stylistically speaking, Bon Iver is probably their most instrumentally ambitious record to date. He borrows from different instrumental qualities from the rawer to the synthetic sound we’d grow more accustomed to from Bon Iver’s later projects. Yet, what makes Bon Iver so palatable is its ability to control the space he occupies. The songwriting allows room to breathe between instruments. Nothing is ever competing for attention. Instead, it’s cohesive on each track. On a personal note, this record was one of the first discoveries I made independent of my obsession with 60’s/70’s classic rock. It evoked a spirit and sound I loved from the singer-songwriters of that era but with a contemporary flair. As I grew older, the record took on new meaning with each big event in my life. I continue to revisit it when I need comfort, but also when I’m seeking that special quality and tonality only Bon Iver could deliver.