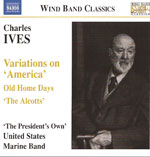 Music by Charles Ives arranged for band! That’s an idea so good that you just know it will work. The American wind band was part of Ives’ native musical world, and its accent pervades his musical language. So what would sound more natural than a full program (74 minutes) of 21 Ives pieces arranged for the modern version of the American wind (or “military”) band? Happily, all expectations are not only met but exceeded by this Naxos release. Most of the arrangements are by either by Jonathan Elkus (Director of Bands, Emeritus at U.C., Davis) or James B. Sinclair (respected Ives scholar). Elkus himself believes that the role of an arrangement of another’s music is to “fulfill or exceed on its own terms the musical values of its source.” In fact, all of the arrangers here are better orchestrators than Ives, so many of the later, more complex works emerge with unexpected clarity.

The President’s Own United States Marine Band may have been the first “name” ensemble outside Connecticut to play Ives’ music, since Ives’ March Intercollegiate (included on this disc) probably was on its program at the first William McKinley Inaugural ceremony in 1897. I can do little more than confirm what you would expect: The playing exemplifies the best in professional band musicianship. The leadership by Col. Timothy W. Foley is absolutely right for all of this music. The notes credit an all-Marine production and engineering crew, so (no surprise) the sound is “Always Faithful”.

The program is intelligently chosen to illuminate particular aspects of Ives’ musical personality. Especially valuable are the earlier marches, songs, and dances. These give a sense of getting to know the scrappy, athletic teen- and college-aged Ives rather than the frail graybeard usually pictured. But coming at just the right moments, in what otherwise is a stream of short pieces, are exquisite transcriptions of the Variations on “America”, Fugue in C, Decoration Day, and The Alcotts. Also worth mentioning are the liner notes. Written by Elkis, they are full, detailed, scholarly, and informative, something rarely achieved these days by the major labels. Wonderful!

Reference Recording: none for these versions