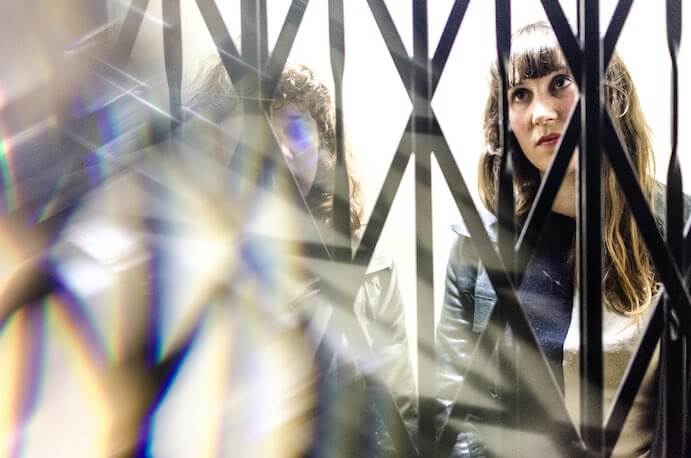 Live music is now returning to London, and Jenny Moore and Rattle’s gig at Café Oto on 9 September was the liveliest I’ve been to since lockdown restrictions started easing. The audience was bigger and definitely louder than at my previous visit to Oto at the end of June, and there was a real buzz in the room.

In the first half, the spotlight was on a deconstructed drum kit, with two performers (Katharine Eira Brown and Theresa Wrigley) facing each other with a collection of drums and cymbals between them. They are women who bang their own drum: they perform under the name Rattle as a ‘double drums/double vocals minimalist punk’ duo, and this was their first live show in two years.

From the get-go, this was a set that hit the gut as much as the ears. Sound bounced off the low ceiling, the floor, the walls, and through the audience. Their loud and clear message is that rhythm is THE primal force of music. Rattle’s four numbers were similar in tempo, based on reiterated riffs with simple vocal interjections, and they were not afraid to keep the same rhythm going for a long period. It’s simple but very effective: if anyone had measured the heartbeat of each audience member, we would surely all have matched the 94 bpm of their set. Rattle are working on their third album, though they come into their own as a live act. This is music making as a communal experience – precisely what we have missed over the past 18 months. The main act of the evening, Jenny Moore, was born in Ontario, Canada, and is now a local artist and performer; it was clear that many of the audience were staunch fans of her work. On her decision to leave Winnipeg, she says: “I knew there was something else to know, and I didn’t know how to know it in that place – so I left.” Between numbers, she hinted at a difficult upbringing in a religious community that she had to escape.

Before her set began, a single bass drum placed on a blanket-topped table took centre stage, and the shiny new grand piano was also spotlit. (I was pleased to see that the old Oto piano has been replaced — when you’re not sure whether the piece you’re hearing is for prepared piano or not, it’s time to get a new instrument.) This looked like a sparse staging, but Moore was joined from the audience by Nandi Bhebhe, Louise O’Connor, Rachel Horwood, Rubie Green, Sib Trigg, Poppy Cockburn, Rosa Irwin Clark, and other members of her feminist F*Choir. Moore is a charismatic, very engaging performer, singing, playing rhythmically quirky piano riffs and directing the singers. The eight songs in her set had something of Meredith Monk’s energy and a minimal, riff-driven style, though with Moore’s highly contemporary edge. Topics included Instagram, identity, and a confessional, personal story about church choir practice — though if this makes her set sound preachy and worthy, it was quite the opposite. For instance, the audience went wild for the wonderfully titled number, “Never trust a therapist who won’t pay another therapist to help them sort their shit out.” Everything was done with a compelling wit and energy. Moore tended to sing the start of each number and then prompted other singers to join in. This was an unusually flexible group: one member occasionally played a violin, another banged the bass drum, and different singers were involved in different songs. I loved the approach of F*Choir: this is a mixed gender group that look how they want, sound how they want, and move how they want, and this freedom of expression shone through their performance. For the encore, Moore said, “If anyone else from F*Choir is here and knows this song, please come up!” and she was joined by eleven other singers. The closing mantra, “Let the earth give way to wild things,” was an earworm that stayed with me all the way on my journey home.

While the volume levels were very different in the two halves of this event, the underlying feeling was very much the same. Jenny Moore, her singers, and Rattle captured the audience through repetition and through the most elemental forms of music — drums and voices. It was an evening that could not have been more timely: it reminded us that music brings us together.