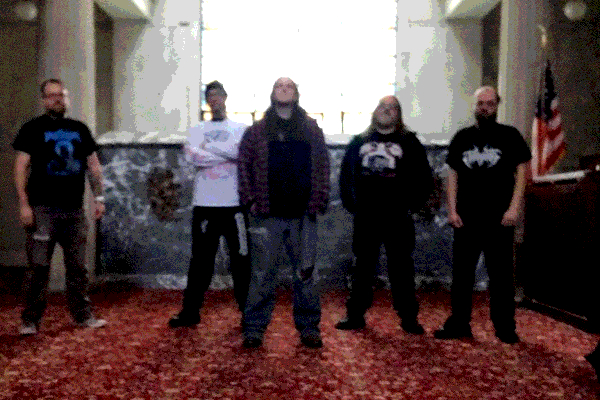 Local Music Beat: Jim Albrecht of Detroit’s Centenary discusses the band’s new album and the Michigan metal scene in this edition of the column

Centenary bass player Jim Albrecht caught up with Audio Ink Radio to discuss the new album, the Michigan metal scene and what it’s like to get back to performing live after the past year. Centenary features Albrecht along with guitarist Mike Bradley, lead guitarist Matt Cunningham, drummer Adam Davey and vocalist Allen Mercer. Find all things Centenary online here.

Anne Erickson: Congratulations on the new album, “Death…The Final Frontier.” It sounds fantastic. How did you guys go about writing and recording this set, and did the pandemic effect the process at all?

Jim Albrecht: Thank you! We are all very pleased with how the album came out. We spent the better part of 2020 writing. If the pandemic had any effect on the process, it was that it allowed us to focus on writing and fine-tuning the songs. We didn’t have shows to rehearse for, so we just worked on new material and channeled everything we had going on into the music. The songs were very well rehearsed before we started recording. The recording process itself went very quickly. We had all the music recorded in one weekend and did the vocals over the two weekends that followed. The whole process went rather quickly. Thematically, we weren’t really influenced by what was going on. There are enough bands out there writing “pandemic-inspired” songs. We stuck with what we know best.

Centenary plays with a very authentic Swedish death sound. What draws you to that style of heavy metal?

I would say that the guitar tone of the old-school Swedish death metal bands is what drew us to those bands the most. That “chainsaw” tone- it’s very specific. The sound that those bands created years ago was quite revolutionary, and it’s cool to see so many younger bands bringing it back. I think we separate ourselves from the other bands on this album, though, by incorporating other influences that we have. That’s why we lovingly refer to our music as “Detroit chainsaw metal,” because we are a hybrid of different influences with a huge emphasis on that Swedish guitar tone. Our love for metal in general goes back to when we were all very young. We’ve all been playing it for many years in other bands, even though Centenary is still relatively “new.”

This album has everything, from solos to grooving to growls. The sound is very dynamic. How were you able to switch it up and make every song so unique?

It’s a result of our collective influences. Mike is the visionary and brings the lion’s share of the riffs to the table, but we collectively bring the songs to life. We really wanted to focus on writing songs with those riffs that get stuck in our heads and not have every song sound the same. We give a lot of credit to our newest member, drummer Adam Davey. His drumming really helped make these songs what they are. We even have a song on the album, “Malicious Symbiosis,” that started out as drum beats Adam had, and we just wrote riffs around them. That one was written in one practice!

My personal favorite track off the album is “Remote Manipulation.” It has a great groove. Tell me the story behind the song.

“Remote Manipulation” is definitely one of the more “different,” for us, songs on the album. The riffs and lyrical inspiration all came from our lead guitarist Matt. His style is quite unique, and the riffs in the song reflect that. When he wrote it, he was feeling ill and hadn’t been able to play guitar much. Then, inspiration hit. He said his cat’s meow for tuna was the inspiration for the pinch harmonic riff. The sporadic nature of the changes reflect how he was feeling at the time. He told us a story about a former co-worker that was always claiming her machine at work was being “remotely manipulated” by someone else. Our vocalist Al took that story and ran with it on the lyrics. It’s becoming a favorite to play live. Glad you enjoy it!

Centenary has been back on stage, playing shows. What does it feel like to get back on the road after such a long period when bands couldn’t perform live?

Being back on stage has been great! While we did venture outside of Michigan for a couple gigs while all of this was going on, we really missed it- not just the playing on stage part, but the community that goes a long with it. It’s great seeing people we haven’t seen in over a year. I won’t say we ever took it for granted before, but not being able to play shows definitely made the whole experience even more valuable to us. Live music is important, for fans and bands. Life without it is definitely not the same. Glad to be back where we belong.

You recently played a sold-out show with Deicide, Kataklysm and more at Sanctuary Detroit. We actually recently interviewed Maurizio from Kataklysm. He’s a great guy. What’s it like sharing the stage with such legends of death metal?

That was a great tour package. Every band on it brought their A-game and were all extremely cool to us. The bands and crew treated us like we were part of the tour and not just the “local support.” It was also great to get to open a tour like that and not have it be a situation where we were required to sell tickets or “pay-to-play.” We are definitely no strangers to opening for such legendary bands, but its one of the things that gives me a feeling of accomplishment. To be playing on the same stage as the bands that made us fall in love with this music is a huge honor. It means we did something right. We don’t take it lightly. That night was our first Detroit gig in more than a year, so it was really special to us. We made a lot of new friends and reconnected with old ones.

Centenary is a Detroit band, and you’re from Lansing, Michigan. Recently, Lansing lost one of its major and longest-running music venues, Mac’s Bar. Another local venue, The Loft, also closed. What does the loss of Mac’s Bar and The Loft mean to you and the local Lansing music scene?

The loss of Mac’s Bar in Lansing is definitely a huge blow, not just to us and the local scene, but to a lot of touring bands, as well. Sure, to many people it was a “dive,” but it was home to a lot of us, and besides, this music was made for dive bars! It’s definitely sad to see it not be here anymore. That place was legendary and had quite the reputation. Some of the best and most fun times of my life happened there. I feel fortunate that I got to play there so much in all the bands I was in. I don’t feel very much of a sense of personal loss over The Loft. I had only played there once. They were important to people around here, too, though, just not in the same way as Mac’s was for us.

What are some Lansing, Detroit and Michigan metal bands that you think should be on people’s radar?

I’m quite proud of our rock and metal scene here in Michigan. There is something for everyone and so much talent here. Some of my favorites are Recorruptor, Throne, Dagon, Temple of Void, Cavalcade, Acid Witch, Perversion, Drink Their Blood, Sauron, The Lucid Furs, Bubak, Plague Years, S.N.A.F.U., Manic Outburst, 1000 Yard Stare, S*** Life, Isenblast, The Glorious Dead, Pan, Hordes, Mortal Disguise, Room 101, and Portal of Pazuzu. I’m sure I’m forgetting some, and I apologize, but that’s a testament to the amount of talent in this state. The local scene in the ’90s helped get me into this music, so I have always had a great love for it.

Thanks for the interview! I definitely appreciate getting a chance to talk with you about our new album and this music that means everything to me.

Anne Erickson’s column appears weekly in Audio Ink Radio. Have a band or concert to share? Contact her at anne@audioinkradio.com.