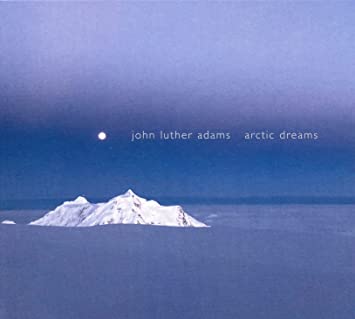 Cold Blue Music has released a new CD by John Luther Adams titled Arctic Dreams. Scored for four vocalists and four strings, the seven pieces on this album also incorporate layers of digital delay that add a richness to the texture. The result is a warm ethereal ambiance throughout the album. Adams writes in the liner notes that “The sung text is a series of ‘Arctic Litanies,’ composed of the names of Arctic places, plants, birds, weather, and seasons, in the languages of the Iñupiat and Gwich’in peoples of Alaska.” The album is dedicated to the late Barry Lopez, a long-time friend of Adams, and the music, characteristically, is heavily influenced by nature and the Arctic tundra. John Luther Adams is a Pulitzer Prize and Grammy Award-winning composer whose experiences in rural Alaska have been a decisive influence on his music throughout a long and distinguished career.

The string music of Arctic Dreams reaches back to the Festival of Alaska Native Arts where it was first heard in 1993 as part of Adam’s composition Earth and the Great Weather. Choral music was added to this in 2000, but the spoken narration seemed to be at cross purposes to the expressive string music. Arctic Dreams represents a re-balancing of these forces so that after 30 years it has become a complete stand-alone piece. The harmonies for all the works on the album are derived from the first seven odd-numbered harmonics above the low D in the double bass. The tones are played on open strings and there is extensive re-tuning of the instruments so that only the natural harmonics are heard throughout.

The first track of Arctic Dreams is The Place Where You Go to Listen, and this is also the title of a sound installation located in the Museum of the North in Fairbanks, Alaska. The installation is driven by the weather, time of day, phases of the moon, earthquake activity and other geophysical data gathered in real time. This is then used to select the vocal and instrumental components of the piece in the moment. The portrayal of natural phenomena also seems to be the basis for this track – it as if we are watching a sunrise on the tundra. The piece begins with a deep chord in the lower strings followed by voices singing a single syllable in three registers. The sustained low chords provide a warm and welcoming feel, yet there is gravitas present also. Some dissonance in the upper voices add a sense of mystery, and the tones seem to be reaching upward with a sunny, optimistic feel. The voices are attended by high, silvery sounds that add a glittery polish, like looking into the Arctic sun on a clear morning.

John Luther Adams does not write music that simply describes nature, rather, nature inhabits his music. We hear nature speaking to us directly and the most consistently surprising thing is how accepting nature is after all we have done to harm the planet. Pointed Mountains Scattered All Around on track 2 exemplifies this with foundational bass tones combined with lighter voices to make a lovely sound, climbing higher in pitch as our gaze looks upward at the mountain peaks. The music could be angry or forbidding, but there is a hospitable feeling conveyed instead. The bass line ambles down, descending from the heights, settling with the voices as they fade at the finish.

Very different emotions are conveyed by The Circle of Suns and Moons on track 3. This is spare and mysterious music with a chilling, almost alien presence. The high strings seem to twinkle in the night as voices climb very high to create a sense of distance and remoteness. This is less organic than the other pieces, but more evocative of a cold clear night in the company of the moon and the stars. The Circle of Winds, track 4, is just that, a flurry of short stringendo strokes in the low strings and a dense rising and falling in the layered texture that is reminiscent of a whirlwind. The disconnected runs of strings form an amazing aural construct. The color lightens as warm voices creep in, sustained and ethereal – completely different from the power of the opening. The feeling is now optimistic and bright, like a blue sky after a storm. The whirlwind sounds return, then recede at the finish.

River With No Willows on track 5 features lovely harmonies in the voices and what sounds like a jangle of bells in the accompaniment that create a sense of calm and meditation. All the sounds here are delicate and beautiful. The One That Stays In Winter on track 6 is a wonderfully abstract sounding of bird calls created by the voices and strings. Flocks of different birds are heard gathering deep in the wilderness and the sounds increase – the birds clearly own this place. The final track, Where the Waves Splash, Hitting Again and Again, is the shortest piece at just under 2 minutes. This consists of a series soft vocal whispers that evoke the waves of an ocean. It is as if we are standing on the edge of a wide beach, just barely able to hear the distant surf.

The excellent voices on Arctic Dreams are supplied by Synergy Vocals from the UK, who have performed works by composers such as Steve Reich, David Lang, John Adams and Arvo Pärt, among others. The string players, similarly distinguished, are Robin Lorentz, violin, Ron Lawrence, viola, Michael Finckel, cello and Robert Black, double bass. All of the performances on this album are perfectly in touch with the spirit of the music. The processing, mixing and mastering, so integral to the realization of this album, was ably executed by Nathaniel Reichman.

All of the tracks on Arctic Dreams bring us into close association with Arctic nature. The music is always reflective and seems to be telling us that nature will eventually prevail, despite our rebellion against it. We are living in a state of grace with nature and must adapt to it rather than seek to conquer it. Arctic Dreams affirms the constancy and primacy of the environmental perspective that has always been present in the music of John Luther Adams.