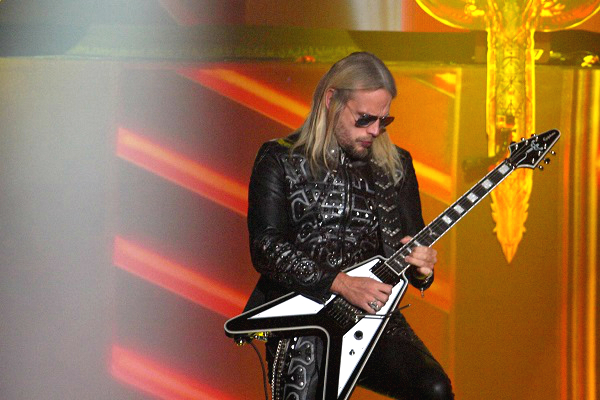 Judas Priest guitarist Richie Faulkner has been hospitalized with a “major medial heart condition,” and the band has been forced to postpone their remaining U.S. tour dates

Judas Priest have postponed the rest of of their current U.S. tour following guitarist Richie Faulkner being hospitalized with what the band describes as a “major medical heart condition.” The legendary metal group had been on the road since early September.

“It is with deep regret that we have to postpone the rest of our U.S. tour,” the band said in a statement. “Richie Faulkner has major medical heart condition issues which have landed him in the hospital where he is being treated. In the meantime, we are all sending love to our Falcon to wish him a speedy recovery… As soon as we have any updates from his doctors on when we can reschedule the dates, we will of course announce them — tickets will be valid…”

Faulkner recently spoke with Audio Ink Radio about Judas Priest’s 50th anniversary as a band. “I know a couple of things, which I think contributes a 50-year career, and obviously one of them is the fans,” he said. “As I said, they’re the lifeblood of any band for a year or 50 years. You’re nothing without your fans and the life that they give you. I think the other overwhelming thing, and it was something that became apparent to me when I joined the band, is the passion that the band has for Judas Priest. They love the music they play. They love the fans. They love what they do. I really think that you can’t have a career for 50 years if you’re not that passionate about what you do.”

Judas Priest have been on the road on their “50 Heavy Metal Years” tour, which was scheduled to run through a Nov. 5 date in Hamilton, Ontario. The band also has a European leg of the tour scheduled to kick off in January, which is currently a go. For the latest on the band, visit Judas Priest’s official website.