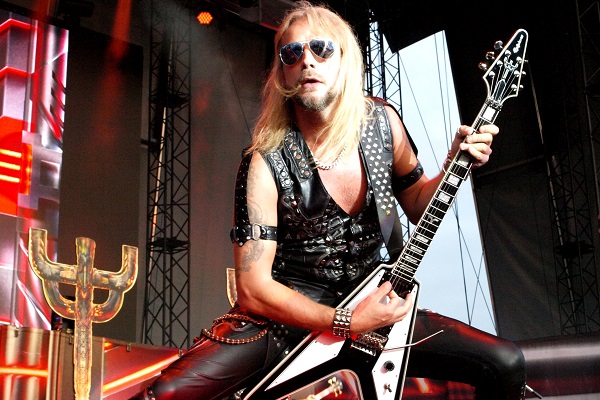 Judas Priest is one of the biggest names in heavy metal music, and now, they have a milestone to prove it. The legendary English band recently passed their 50th anniversary, and they’re heading out on the road on year 51 to celebrate the landmark.

In addition to touring in honor of the anniversary, the Judas Priest also has a limited edition box set dropping on Oct. 15. The set, called “50 Years of Heavy Metal Music,” celebrates 50 years of Judas Priest, the fans and heavy metal music in general.

Richie Faulkner joined Judas Priest in 2011, and Priest followers have fully embraced Faulkner and his work on the band’s most recent studio albums, “Redeemer of Souls” and “Firepower.” Faulkner spoke with Anne Erickson of Audio Ink Radio about the band’s 50-year legacy, what it’s like being back on the road and the experience of being a first-time father. Read the Richie Faulkner interview below, listen via the YouTube player and hear it via the Audio Ink Radio show on Apple Podcasts here and Spotify here.

Anne Erickson: What a year. It’s great that Judas Priest is finally getting out there on your 50th anniversary tour. How does it feel to be prepping for this tour, which has been such a long time coming?

Richie Faulkner: Well, we were in the U.K. a few weeks ago doing all the tour prep – the band rehearsals, the production rehearsals – and it was surreal. I mean, on a personal note, when I joined the band, it was the farewell tour. So, I thought I was going to go through that process just once and then the band was going to retire. But, to be here 10 years later doing the same kind of preparation and, obviously, after the pandemic and everything. There was a lot of uncertainty, as well, about when everyone was going to get back to it or when the production rehearsals were going to happen again. It was just surreal, as you can imagine. So, we got all that together. We got the show together, and we did a show in the U.K. Just to be up there again, playing live music to 20,000-plus maniacs. I mean, it was emotional. You can imagine, all that uncertainty of the last year and a half or whatever it has been now. Everyone- fans and bands alike. Everyone was there in a field with their horns in the air, and it was just an incredibly emotional experience on many levels. From my point of view, I have a pair of mirror sunglasses on, on stage, and it was lucky that night, because between us, I shed a little bit of an emotional tear. It was just a lot. You know what I mean? So it was a celebration and hopefully a sign of things to come.

I saw that you guys performed at Bloodstock, and I have some friends in the U.K. who went. That had to be so emotional, just finally getting back out there after all the uncertainty.

That’s right, and right up until the day of the show, really, everyone was being super careful. Everyone was doing all the tests and playing by the rules. If one chink in the armor chinked, the whole thing goes off. So, it was just an incredible release of tension and pressure and all that sort of stuff. Is there a better way to release that emotion than at a heavy metal gig that’s loud? Cathartic is the word I’m looking for, just to let all that frustration out.

Looking around, I’m sure you’re seeing, like me, a bunch of tours get halted due to band or crew members getting sick. What are you guys doing to make sure everyone stays healthy on the road?

We’re doing as much as we can, like everyone else is, really. We’ve got our own rules in terms of our crew and local crews, and we’re working with venues, obviously. Everyone’s trying to do their best to minimize or eradicate any sort of cases. We’re just doing whatever we can do to stay safe and stay within our own sort of isolation camp. There are no meet-and-greets or anything like that for us. Guest lists are going to be restricted to what they were before, because we can’t really gamble on anyone in the crew going down. We’re taking precautions and working with venues and local crews alike to minimize the risk for everything, really, and I think everyone’s doing that right.

You have a limited edition box set out Oct. 15, “50 Years of Heavy Metal Music,” that’s choc full of lots of goodies. How did you guys make this box set special for fans?

I think they threw in the kitchen sink, as they say! There are live versions and unreleased stuff that I’ve never heard before. It was really great to hear and thrilling as a fan of the band to hear those versions that I’ve never heard. It’s a complete celebration and collection of the band’s 50-year career and the fans that put them there. (It’s a celebration of) the fans that gave the band this 50-year life – it’s half a century – and giving them all of this stuff. I’ll be getting a box set. I haven’t gotten one yet, but hopefully! (Laughs) It’s just a celebration of Judas Priest and heavy metal and their contribution to music as we know today.

What do you think it is about Judas Priest that this band has been able to achieve a 50-year legacy?

I don’t think it’s any one thing. I know a couple of things, which I think contributes a 50-year career, and obviously one of them is the fans. As I said, they’re the lifeblood of any band for a year or 50 years. You’re nothing without your fans and the life that they give you. I think the other overwhelming thing, and it was something that became apparent to me when I joined the band, is the passion that the band has for Judas Priest. They love the music they play. They love the fans. They love what they do. I really think that you can’t have a career for 50 years if you’re not that passionate about what you do. So, it’s kind of like an ongoing trade off between that passion. You put 1,000% in, and the fans give it back, and then it’s your responsibility to give it again, 10,000%, and on it goes for 50 years. As I said, there are lots of facets to why that is, but that’s definitely something that I’ve seen contribute to that half-century career.

One thing special about you is that you joined Judas Priest later on, but you’ve been involved with the writing and recording of Judas Priest’s latest records, which fans just have really embraced. How does it feel to get that acceptance, and what is it like writing and working with Rob Halford?

I’ve been incredibly fortunate to be accepted by the fans after 40 years, before K.K. quit, so I’m incredibly grateful to them for having their support. Working with Rob (Halford) and Glenn (Tipton) in the studio setting- it’s just a masterclass, really, in how they develop ideas and how they hear things differently and what contributions they make based on what music they hear in their heads. Taking three people’s ideas and making them a new one, which is better than anyone else’s, so it’s greater than the sum of its parts. Me, you and Glenn would have an idea, and we’d put it all together and create this new monster. It’s an incredible sort of masterclass in creating music and being creative and listening to your inner theory. I don’t hear voices in my head – not yet, anyway! – but listening to that music in your head and getting it out and putting it on tape and putting it out there for the world is an incredible process.

Congratulations on becoming a dad. How has being a dad influenced how you view life and music?

It’s incomprehensible, really. You can’t really put it into words. It’s not about you anymore. It’s about this level being that you’re responsible for. As I said, that show we did in the U.K., I shed a tear because it was so emotional, and I looked down off the side of the stage, and there was this little human being that wasn’t there before, and I shed another tear. (Laughs) I sound like a bit of a cry baby, but it was just a lot of emotion. So, two years ago, we were on stage in Las Vegas for the last show of the Firepower tour. Fast-forward two years, we’re back on stage, and there’s this little human being down there with a leopard skin jacket on and chucks and a pair of ear defenders, and she was rocking out. It’s unbelievable. Every day is a different journey. She loves Def Leppard. She head bangs to Def Leppard, which is an amazing thing! It’s a trip, and we’re looking forward to seeing how our life shapes up and who she becomes. So, it’s amazing.

Well, your daughter has good taste, because I love Def Leppard, too. (Laughs) What’s it like having George Lynch as a father-in-law? We actually just had him on the show.

George is great. George has got a very English sense of humor. He’s kind of dry and sarcastic, which I really like about him. You don’t get that very often in the States, I’ve found, anyway. So, apart from being a great player, he’s been a great father. He’s a great grandfather to the baby, and he loves her. He’s playing her guitar. He sings to her. Obviously, watching George play, George has got a very unorthodox style and always has- he always stuck out, really. There were five guys at that time, in my opinion, that really stuck out, and he was one of them as someone that was not only a shredder but someone who had something unique to say on the instrument. He’s still got that unique quality. It’s a joy to see him play and learn stuff from him. And, he’s funny. That’s the main thing!

Would you and George Lynch consider doing a song together?

Yeah, we’ve jammed. He came over to the house a few times, and we jammed some stuff in his studio, and of course, you never know what the future holds. I’d love to do a track with George. He’s an incredible player and just a workhorse. He doesn’t stop. He’s either writing or recording. Recently, he’s been out on the road again. He’s just- he’s a workaholic, almost. Again, he loves what he does, so that’s great to see. I would love to play with George. Let’s put it that way.

It’s been a pleasure talking with you. We’re looking forward to having Judas Priest back on tour in the U.S.

We’re really looking forward to getting back out to our American brothers and sisters in the next few weeks. We’ve got some surprises for people that haven’t seen anything online. I don’t want to spoil it for anyone, but it’s going to be a great celebration of Judas Priest and live music in 2021, so looking forward to seeing you all.