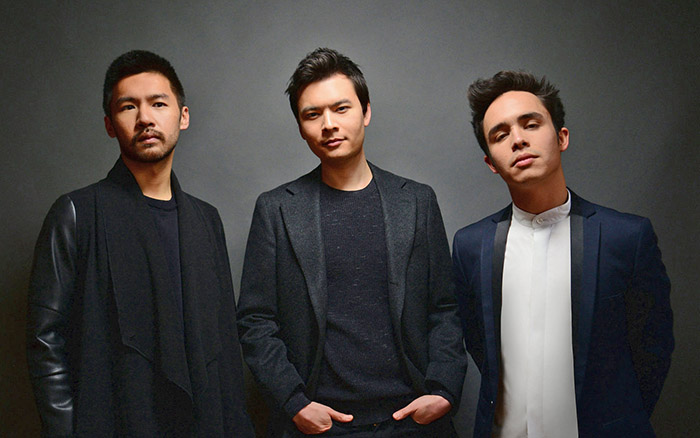 Since in-person concerts resumed there in July, audiences at the beautiful Shalin Liu Performance Center have been enjoying the privilege of hearing great chamber music again. On Sunday the Junction (piano) Trio combined a 2019 piece by their pianist with one of the genre’s masterpieces, the Ravel’s Trio for piano, violin and cello. Pianist Conrad Tao, violinist Stefan Jackiw, and cellist Jay Campbell have individually and collectively gained acclaim for searching and visionary approaches to both standard and new repertoire.

Tao introduced his Piano Trio No. 2, seemingly warning us about the dire ecological effects—particularly in the world’s oceans—of single-use plastic bags but finishing by noting that, when one takes into account such factors as the impact of manufacturing on climate change, water use, and air pollution, the single reuse of a plastic bag is far less harmful than (for example) an organic cotton tote bag which, according to a Danish study, must be reused 20,000 times to have an equivalent environmental impact. As to musical influence, Tao alluded to the music of the Delta blues musician Charley Patton (1891-1934), and the printed handout showed the record label of Patton’s Magnolia Blues. Perhaps John Cage might have been an (unacknowledged) influence too, though, since the first movement opened with over a minute of Tao crumpling and stretching a plastic bag—and nothing else. Indeed, much of the movement seemed to be an attempt to expand the limits of what constitutes music with frequent resort to sound effects more than musical tone and recognizable phrases. Tao’s holding the bag while playing had no perceptible musical effect but seemed merely a visual gimmick. While there he had penned moments of tonality in jazzlike harmonies and I made a concerted effort to discern something even vaguely resembling Delta blues, ultimately, little communicated a coherent musical thought to my ears. Though the second movement slightly more frequently made conventional use of the instruments, the overall effect was equally inscrutable. Here it was the violinist who picked the bag up off the floor and held it in his bowing hand while playing. The glissandi and other microtonal writing in the strings provided some abstract interest, but again communicated little. Following the concert came a brief Q&A with the trio during which an audience member inquired whether Tao had been intending to simulate the underwater sounds of whales; Tao replied in the negative but was intrigued by the idea, as I was. Yet this simply reinforced my impression of a well-meaning but ultimately ineffectual didactic exercise, of an opportunity squandered. When a composer almost entirely avoids traditional musical language to let the listeners form their own conclusions, the result generally is (to quote Terence), “Quot homines, tot sententiae”—as many opinions as people (the composer’s being merely one among many).

Ravel’s Piano Trio of 1913 also must have been considered outré by many at the time, but though the composer did use uncommon nomenclature in the Pantoum and Passacaille middle movements, these are essentially variations on traditional tropes; moreover, though his harmonies ranged well beyond those of the still-active Fauré, Widor, and Saint-Saëns, they sound tame compared to the idiom of Stravinsky’s Le sacre du printemps, from the same year. The musicians instilled the Modéré first movement with the gentle melancholy so common in Ravel’s oeuvre but with a special refinement in this piece. The movement’s climaxes had all the thrust and power needed, but the more lyrical and graceful moments—rolled piano chords and string glissandi—most beguiled my ears. At the conclusion, the beautiful distant echo of the first theme, now in the relative major, was deeply affecting in its simplicity.

A pantoum is a Malay verse form of four-line stanzas, but Ravel adapts it to music in the second movement by intertwining two main themes throughout as he builds it into a virtuosic scherzo, not of the joking kind but rather a surging tsunami of exhilaration. Nevertheless, the relentless energy shouldn’t preclude the crisp execution of a telling detail such as the triplets in the second main theme, as sometimes happened. Still, the verve and power of this traversal overwhelmed without sacrificing balance among the instruments, and the trio left the audience noticeably gasping at the ending—in a good way!

For me the profoundly expressive apex of the concert came in the Passacaille third movement. This, too, is not a term one expects to encounter in chamber music as it is most commonly associated with solo organ literature (using the more common Italian term, passacaglia), denoting a set of variations constructed on a ground bass. Given the egalitarianism of chamber music, Ravel naturally has the fundamental tune migrate through all parts of the texture over the course of the movement. The artists carefully built a great arch, beginning in the depths of the solo piano’s bass, incrementally bringing it to a mighty climax that seemed to shake the hall, then with equal care descending gradually from the peak. The muted string duet, virtually without vibrato, and the final recurrence of the piano’s low-bass solo were starkly beautiful and moving, each a foretaste of Ravel’s style dépouillée (stripped-down style) heard in so many of his works from the 1920s.

After the profound splendors of the Passacaille, the airy delicacy of the Final quickly lifted us back above earth’s surface . . . though not all was lightness. Ravel makes perhaps his only oblique reference to the encroaching horror of World War I in the fanfare figures in triads assigned to the piano. These could have been much more martial and brassier; Tao’s over-generous pedaling here impeded the French ideals of clarity and crisp brilliance. However, with the arrival of the chordal climax in the piano, topped by scintillating string trills, joy triumphs, and the trio’s unforced power and virtuosity again inspired awe as Ravel’s great work came to a ringing conclusion.