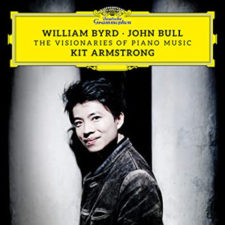 A good number of pianists have been taking up works of Tudor virginal composers like William Byrd and John Bull on the modern concert grand. Yet only a handful have truly internalized the music to Kit Armstrong’s remarkable degree, as he proves time and again throughout his first recording for Deutsche Grammophon.

In contrast to the x-ray clarity that Glenn Gould brilliantly brought to Byrd, Armstrong makes full yet discerning use of the piano’s dynamic and coloristic resources. For example, he takes Byrd’s Sellinger’s Round at a galloping, lilting clip that’s nearly twice the tempo of Gould’s drier, more uniformly articulated rendition, imparting more dynamism and drama along the way. Each of the variations in Byrd’s Walsingham conveys a distinctive character that makes most harpsichord performances sound generalized by comparison.

Armstrong begins Bull’s Fantasia on a Fugue of Sweelinck in muted, caressing tones, and gradually opens up his sonority and hardens his attack as the music builds. Some listeners may prefer the breadth and harmonic intensity of Alan Feinberg’s Steinway & Sons recording, yet Armstrong’s more pronounced timbral and textural contrasts may win the day. In Byrd’s “Ut, mi, re” Fantasia, Armstrong’s linear control and total independence between the hands sounds as if there are two different pianists playing two different instruments. Indeed, each selection amounts to a revelation. An audacious and auspicious label debut if there ever was one, enhanced by Armstrong’s intelligent booklet notes and DG’s warm, full-bodied sonics.

Album Title: The Visionaries of Piano Music
Reference Recording: This one