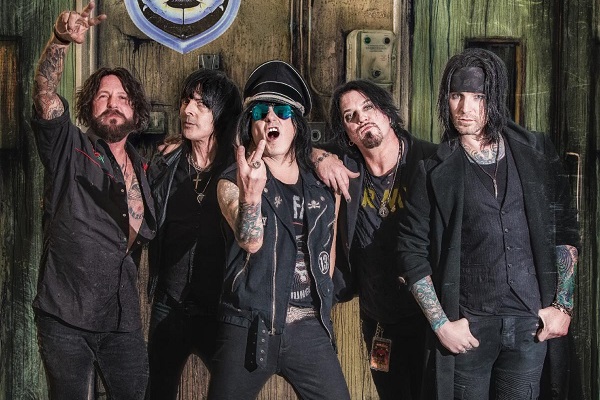 L.A. Guns show off rhythmic guitars and an upbeat swagger on their new single, “Knock Me Down”

L.A. Guns are prepping to release a new album, and now, the guys have unveiled a taste of what’s to come. The longstanding California rock band has announced details for their upcoming studio record, “Checkered Past,” and released the set’s debut single, “Knock Me Down.”

“Checkered Past” will feature 11 original songs and arrive Nov. 12 via Frontiers Music SRL. The album will mark L.A. Guns’ follow-up to 2019’s “The Devil You Know.” The band has been prolific as of late, releasing new albums every two years, and the new release follows that pattern. L.A. Guns’ current lineup features Phil Lewis on vocals, Tracii Guns on guitar, Ace Von Johnson on guitar, Johnny Martin on bass and Scot Coogan on drums.

“Knock Me Down” features a a slightly bluesy swagger with rhythmic guitars and an upbeat, high-energy deliver. “Stand back / ‘Bout to get a smack / Think you can hold me down,” Lewis sings in the chorus.

A press releases promises “Checkered Past” to be “arguably one of the most vital and exciting releases” in L.A. Guns’ catalog. View the album’s track list and listen to “Knock Me Down” below.

In other news, earlier this year, L.A. Guns guitarist Tracii Guns released joined forces with Stryper singer Michael Sweet to release music with their new project, Sunbomb. That project features a heavy, doomy sound coupled with the heavy metal for which Guns and Sweet are known.

L.A. Guns is separate from the band featuring Steve Riley and Kelly Nickels, the latter which is now called Riley’s L.A. Guns.