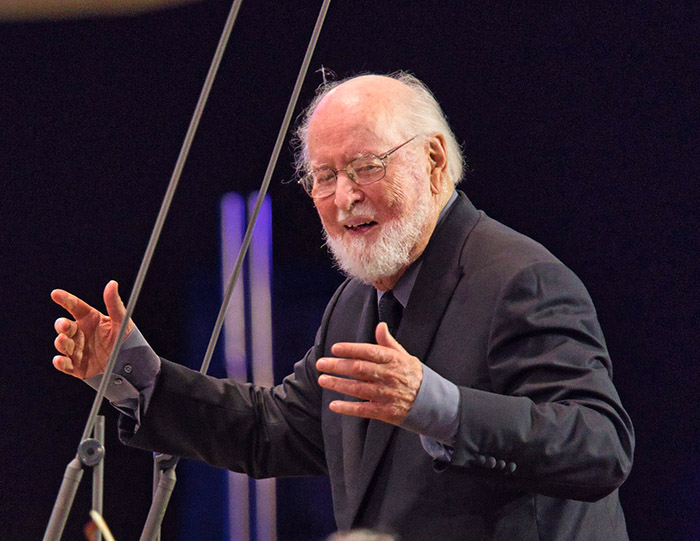 The annual Pops Movie Night concert at Tanglewood attracts an enthusiastic crowd partly because it often mixes the familiar music with imagery from much-loved films. And at this venue, a certain number of the scores come from local favorite John Williams. On Friday August 13th, Keith Lockhart led the first half, consisting mostly of older scores from classic films, with just one Williams work, with came from a light romance rather than one of the blockbusters. Later Williams led portions from some of his best-known cinema outings and one largely overlooked by critics and audiences.

The film clips shown with most of the numbers were assembled specifically for this program by Susan Dangle, and edited by Dick Bartlett (Lawrence of Arabia, a sequence of Audrey Hepburn scenes to accompany Sabrina, and exciting montage of fast-changing Olympics scenes. Laura Gibson assembled montages which Scott Draper edited for An American in Paris, The Godfather, and Casablanca. She also produced scenes from The BFG, edited by Adam Witt. Some of these scenes seem to have been selected to match precise musical selections, while others, not so closely linked, allowed listeners a clue as to the general tenor of the related movies.

Many of the most famous passages of film scores accompany frenetically busy moments onscreen—battles, chases, and the like. There can be too much sameness of sonority if too many such scenes with soaring brass, thundering percussion, poignant woodwinds, and rushing strings overload us. The canny planning of this year’s concert provided enough variety from one example to the next—alternating warring armies with a tender love scene or exuberant dance or delicate, colorful fantasy, which means that when the big crowd pleasers come (and we all know what they are in a selection of John Williams scores), they can make their best effect.

After leading a kind of overture for the evening with Williams’s lively arrangement of Hooray for Hollywood (which included clever references to several familiar songs about show business in addition to title song by Richard Whiting), Lockhart offered a characterful medley of themes from Maurice Jarre’s evocative score to Lawrence of Arabia, followed by an extensive series of dance scenes featuring Gene Kelly and an arrangement of Gershwin tunes used in An American in Paris. Williams’s delicate score to Sabrina backgrounded a visual tribute to Audrey Hepburn, who had played the title role in an earlier film version of the story. But the medley underscored series of still photographs of Hepburn in a wide range of her films, which gave a sense of her beauty and grace, though with selections from the remake of Sabrina, in which she did not appear. The last two segments of the first half offered darker examples with a distinctly Italian color in Nino Rota’s setting for The Godfather and a mixture of tension and romance, combining the Marseillaise with As Time Goes By in Max Steiner’s effective accompaniment to Casablanca.

Williams began his segment with two commissioned fanfares—one for the Oscar awards (appropriate for an evening celebrating film music,) and the other, his “Olympic Fanfare and Theme,” illustrated with breathtaking, fast-moving clips from several Olympiads of recent decades.

The first of his own scores he conducted came from a film I had not encountered at all, or even heard of: a fantasy based on a Roald Dahl story, The BFG (which stands for big friendly giant). The imagery involved a kind of magical light show in which dreams become ideas, captured as different colors of light in jars. The music reflects the brilliant glow of the lights, swirling and dancing. Next came two selections from the Indiana Jones films: first a dynamic chase scene from the final film in the series, The Last Crusade, for a hair-raising chase sequence in which Harrison Ford and Sean Connery on motorcycles are pursued by a group of Nazis. The composer-conductor explained beforehand that he had written it, he had thought it suited the dynamic character of the scene, only to discover in the final print that all could only hear motorcycles! At least under these screened clips, the sound projected effortlessly. A romantic sonic depiction of Marion, the love interest in the first film, Raiders of the Lost Ark followed.

The planned closer brought us “Throne Room and Finale” from Star Wars: A New Hope, the original film of the series, and the one which ended with the ultra-famous theme that secured the composer’s international renown.

For an encore, Williams turned to the “dark side” with the Imperial March from The Empire Strikes Back. Then both conductors took turns conducting the “flying music” from E.T.: The Extraterrestrial. Sustained applause on all sides ended the evening.