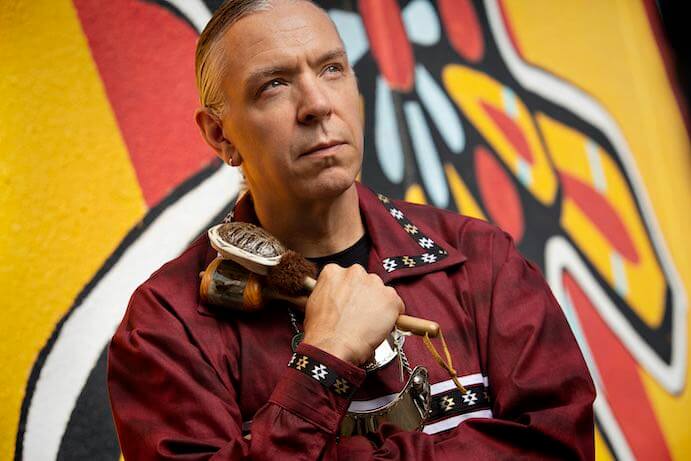 Lowak Shoppala’, a work for orchestra, children’s chorus, and narrator, stands out in the catalogue of composer Jerod Impichchaachaaha’ Tate for its privileging of Chickasaw stories. Commissioned by the American Composers Forum in 2006 and premiered in November 2009, the staged version brought together a network of Chickasaw performers, dancers, storytellers, and artisans. Since the premiere, ensembles throughout the United States have subsequently performed individual scenes from Tate’s musical score. The newly released album (Lowak Shoppala’, Azica Records, 2021) presents the first commercially available recording of the entire piece.

One of the most compelling aspects of Lowak Shoppala’ is the interplay between Tate’s score and the libretto by acclaimed Chickasaw writer and activist Linda Hogan. In the opening scene, narrator Richard Ray Whitman (Yuchi/Muscogee-Creek) powerfully delivers Hogan’s nuanced metaphors describing fire and light’s importance in the Chickasaw migration story.

In the three scenes of Act One, Tate’s score and Hogan’s text shift in prominence to construct a narrative that provides a platform for traditional Chickasaw dance, stories, and crafts. A sudden string glissando marks the beginning of “Double Header,” a traditional Chickasaw stomp dance. Although the Chickasaw Nation Dance Troupe is visually absent on the album, Tate’s score sonically evokes their circling movements by threading orchestral gestures in and out of the dancers’ singing, chanting, and percussive sounds. “Shell Shaker” presents the story of Loksi, a young girl who befriended the turtle people and brought the shell shakers (loksi’shaali’) worn in Chickasaw stomp dances. The scene draws attention to Chickasaw storyteller Lynn Moroney’s moving performance of Loksi’s story in short stanzas, which frame and overlap with musical meditations on the narrative.

In Act 2, Lowak Shoppala’ shifts to poignant scenes reflecting the Chickasaw people’s loss, mourning, and resilience in the aftermath of colonial violence and genocide. Hogan’s poetry in “Removal” recalls the plants, animals, and geography in the Chickasaw’s ancestral homelands in Mississippi until they were forcibly relocated by the United States’ 1832 Indian Removal Act. Tate reflects loss and longing by tinging familiar themes and textures with dissonance, or prolonging melodies extended with repetitive wanderings, hauntingly sung by the Chickasaw Children’s Chorus. “Spider Brings Fire” provides hope via a Muskogean story about a small spider that retrieved sacred fire from an old sycamore tree when a crow, owl, and snake could not. Here Wes Studi’s (Cherokee) storytelling takes center stage, playfully delivering the song’s moral that, “even the very small can accomplish great things.”

Act 2 culminates with “Hymn,” Tate’s re-orchestration of Choctaw Hymn 138 as a “reflection of [his] Grandmother Foshi’s story” about the final mass for Chickasaw congregants at “the Old Monroe Mission in Mississippi.” Hogan’s poetry finds the tension between the hymn’s origin as a violent tool of colonization, and how the Choctaw and Chickasaw “took the new ways and changed them to ours…we made them our own.” Tate’s score reflects this tension, developing earlier soaring brass themes to transform solemn hymn into bold refusal of linguistic assimilation. Chelsea Owen and Stephen Clark’s undaunted performance of the Choctaw hymn fades into a reprise of “Double Header” and “Fire and Light.” Here, Whitman provides inspiration and solidarity, “We have all been given the fire. Let us burn our way into the world, let it light our dreams.”

Even ten years after its premiere, Lowak Shoppala’ still succeeds in constructing a nuanced vision for affirming Chickasaw culture and sovereignty. The work invites settler listeners to interrupt what Dylan Robinson calls “hungry listening,” or consumptive listening practices that extract and (mis)appropriate Indigenous knowledge. It asks settler listeners to understand their own position within historic and on-going settler-colonial structures to engage in more ethical relationships with Indigenous communities, knowledge, and land. More importantly, the album produces a space that fundamentally affirms the value and reinvigorates the vitality of Chickasaw and Muskogean listeners’ language, stories, cultural traditions, and communities.