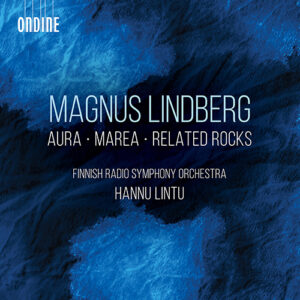 This recording includes three live recordings of compositions from the 1990s by Magnus Lindberg. Hannu Lintu leads the Finnish Radio Symphony Orchestra in energetic and focused renditions of two of these challenging works, bringing out considerable detail from Lindberg’s vivid orchestrations. A quartet of pianists and percussionists perform the chamber piece, Related Rocks, an interesting corollary to the larger compositions.

By 1990, when Lindberg had completed Marea, he was already an established composer. Particularly noteworthy was 1985’s Kraft, with a large orchestra, multiple soloists, enormous gongs, and influences from German industrial music, notably Einstürzende Neubauten. Marea is for more modest forces, a sinfonietta; however, it sounds larger than the sum of its parts. The title means “tides,” and the piece is a single movement set of variations. There is much in Marea that is muscularly scored, indicating the powerful ebb and flow of the ocean. Indeed, the flowing nature of the music overwhelms its constructivist design to create densely imprinted textures and dramatic climaxes.

The chamber piece Related Rocks (1997). for a quartet of pianists and percussionists with electronics, was written at IRCAM. It has a similar instrumentation to the Bartôk Sonata for two pianos and percussion, and its raucous ending is certainly Bartôkian in design. Most of the piece departs from this script, with a blending of the instrumental cohort rather than the bifurcation of the Bartôk sonata. Lindberg explores gamelan-like harmonics with spectacular shimmer. Rhythmic canons between piano and pitched percussion provide rigorous contrast for the more vertically oriented passages. Lindberg demonstrates both the percussive and sonorous qualities of the instruments, and the software he uses allows one to morph from one sound to the next.

Aura (1994) is dedicated to the memory of Wiltold Lutoslawski, who passed away while Lindberg was composing the piece. At forty minutes in duration, it is the longest piece in his catalogue. Cast in four movements, played attacca, with a scheme of fast-slow-scherzo-finale, Lindberg has said it is neither a symphony nor a concerto for orchestra. Instead it seems to flow organically, with successive movements commenting on their predecessors. The concerto designation is tantalizing because material is often deployed in smaller cohorts of the orchestra and soloists. The first movement’s brass fanfares are followed by ricocheting counterpoint from winds and strings. Each successive climax adds to the complexity of the vertical chords that announce it. Winds, strings, brass, and percussion each take a turn as active ensembles. A general pullback allows for diaphanous strings and whorls of woodwinds to blend together. This is supplanted by edgy ostinatos and rangy clarinet passages. The trading off intensifies, bringing the movement to a fortissimo pileup and moto perpetuo coda that leads into the spectral verticals that begin movement two.

Lindberg is not known for writing slow movements, but the second one of Aura qualifies. Blocks of harmony are connected by trumpet filigrees. Overtone chords and long string lines are underscored by stentorian timpani and succeeded by wind trills. The chorale-like movement of the harmony continues, until heraldic brass announce descending cellos and divisi string harmonies. Oscillating cells and intricate blocks of chords cascade through much of the rest of the movement, with echoing harmonics and busily moving pitched percussion giving decay a boost. Percussion – gongs notable in their appearance – and glinting winds bring the movement to a close. It is followed by a Scherzo, with skittering lines, repeated motives, and wide-ranging cascading verticals. The finale is a boisterous summation, with allusions to the music that has come before, motorized by post-minimal ostinatos, generously scored string melodies, and triumphal brass. Aura is an imposing, impressive piece.