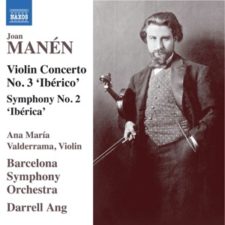 Joan Manén (1883-1971) was a locally well-known Catalan composer who apparently had serious ambitions as a creator of large-scale works. Both pieces here are very substantial–the Violin Concerto No. 3 lasts 43 minutes, while Symphony No. 2 takes nearly an hour–and both are subtitled “Ibérico/a” for some reason. I say “for some reason” because Manén avoids employing the obvious Spanish color and melodic syntax that we often expect in composers from his neck of the woods. The problem is that nothing takes their place. These works share sort of vague anonymity that makes them seem quite a bit longer than they already are. Certainly this music is far less rewarding than the other pieces of his previously reviewed (very positively) by my colleagues David Vernier and Andrew Farach-Colton.

Manén has nothing especially interesting to tell us formally either. Despite indications such as “energico,” “con spirito,” or “allegro molto,” energy and spirit are exactly what is missing. Certainly the performances aren’t to blame. The Violin Concerto sounds like a whale of a piece to play, and Ana Maria Valderrama deserves lots of credit for taking it on with gusto and virtuosity to burn. Conductor Darrell Ang leads Manén’s home town orchestra with confidence and conviction. Neither artist, however, despite the best intentions in the world, can eliminate the general impression of drabness. That’s the composer’s fault, and there’s simply nothing to be done for it. Some local talents are local for a reason, and Manén is one of them.