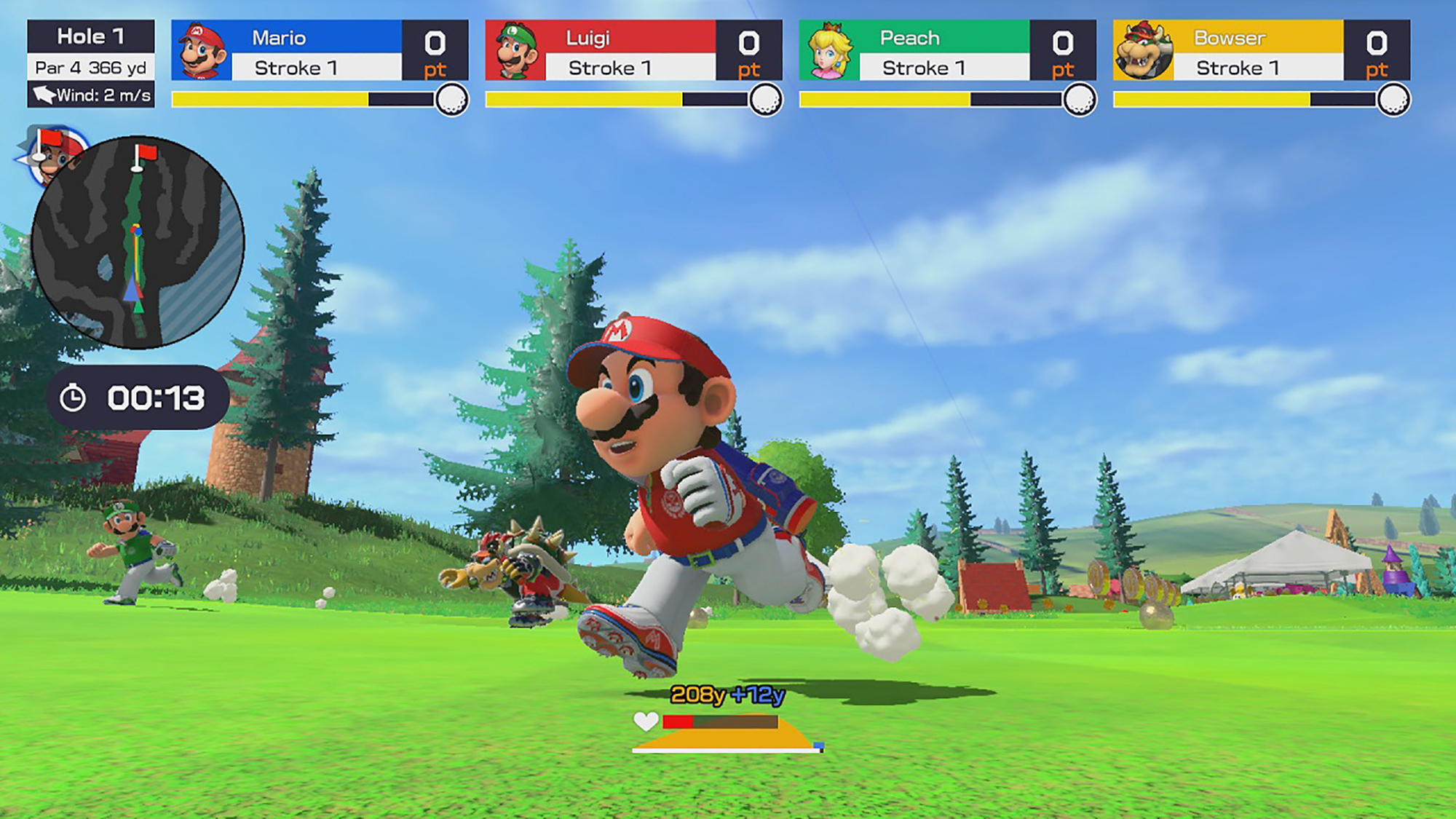 I love it when a sports game developer goes to the effort of creating a story mode, as it’s a great way for players to acquaint themselves with the game’s mechanics away from the intensity of online multiplayer. It’s also a wonderful means of capitalising on the storytelling that is inherent to any competitive sport. The story mode in Camelot Software Planning’s Mario Tennis Aces was a lot of fun, but the studio’s latest, Mario Golf Super Rush, is even more ambitious with its narrative.. Instead of having you don the dungarees of the titular Mario, Super Rush’s Golf Adventure has you play as a Mii Rookie in a household full of upstart golfers.

The mode’s opening is a lot like the start of a classic Pokemon game, except that a pink, squid-mouthed dinosaur called Birdo is your legal guardian. There’s a little hub town, areas you can only access after picking up badges and customisable stat-boosting. It’s unorthodox by nature and starts off linear, but quickly veers into the absurd. I leapt from qualification to course until I was fighting a giant bird by repelling lightning bolts with Duff shots. Dressed in full golf attire, Wario and Waluigi were there to act as bait, because of course they were.

Didn’t expect Mario Golf to turn into Dark Souls but here we are, I guess pic.twitter.com/1Ou7cr4aaP

I love how Golf Adventure summoned smart ways to tie the narrative and setting to the story as you explore the various courses. When you reach the desert-covered and Pokey-possessed Balmy Dunes, you’ll have to manage a mini water bottle between strokes or risk passing out on the course. These little gimmicks were nothing too serious but they always coaxed out a different playstyle that helped me understand the game better. Still, I would have loved to see Camelot play with the format even more. The boss battles brought golf off of the course in interesting ways, but I was dying for some more golf-based puzzles or creative skill drills to help train some of the game’s trickier inputs.

The writing throughout Golf Adventure is a lot of fun. It’s irreverent and ready to joke about Mario lore, with a deep-seated dread for anything remotely serious. At one point in the story, a robed Koopa mentor called Master Stinger helps you awaken some ancient energy so you can smack the life out of a golf ball and obliterate a mountain. I laughed a lot across its seven-hour runtime, even when it was flagging in parts due to a reliance on Speed Golf, which is easily the game’s weakest mode. It rarely lets you play a normal game of golf in Golf Adventure beyond the opening act, which I thought was an odd choice. It shows the game has a lot of confidence in its own weirdness, but there were times when I was begging to play a standard 9 holes.

Beyond the story, I think your opinion of Super Rush will be based heavily on your expectations going into it. If you’re looking for a hyper-realistic golf simulator, you may want to look elsewhere. The game controls really well but it’s definitely more arcade than intricate. But who looks at Mario Kart and expects Gran Turismo? Super Rush is not trying to be the best golf game, it’s trying to be the best Mario Golf game, and it makes a compelling argument for that title with its feature set. You’ll be pleased to hear it also looks the part, with very few glitches and some great sound design, all standard fare for a Nintendo first-party.

At its most basic, a game of Standard Golf as Mario characters in Super Rush is a bloody good laugh, and the mostly accurate motion controls make it better if you’re in a group. Yet even with button controls, the little haptic stings when you’re driving or putting add a lot to the game. Trying to sort out backspin and curve is a rewarding challenge, too. I thought I was great after beating the campaign and got my head kicked in online, but defeat didn’t feel so crushing given the amount of skill in the game — I just started learning from watching the professionals at work. Statistics matter of course, and you’ll likely swap between a few characters before you find your favourite.

Then there’s Speed Golf. In this mode, after you hit the ball you have to run after it, and the speed with which you complete a hole factors into your score. On your way you can dash into other players to stop them and send their balls flying off course, leveraging environmental hazards to wreak havoc. It’s super frantic so if it doesn’t prove to be a nice change of pace, it might grate a little if you’re used to spending time setting up your shots. Battle Golf is an even more hectic alternative, trapping players in a walled arena. You have to score, say, three holes in the shortest time possible, and random events occur that can turn golf balls into Yoshi eggs, among other daft oddities. Camelot turned Tennis into a fighting game with Mario Tennis Aces, and the studio’s twist on golf isn’t quite as revolutionary, but it’s still very charming.

Once you’ve wrapped the story you’re left with the ability to play any of the above modes locally or online, and you can always run the campaign again with a new Mii. It would have been nice to have a challenge section full of golf puzzles or bite-size matches, perhaps with super-powered characters and trap-laden courses. This might have extended the replayability of Super Rush for solo players, but like Mario Kart or Mario Tennis Aces before it, this is another game that lives and dies by its multiplayer replayability, and it already has that in spades.

Mario Golf Super Rush is available on the Nintendo Switch. The review is – obviously – for that version.

I don’t think it’s worth picking up Mario Golf Super Rush for the campaign unless you’re a solo player really keen on arcade golf and the Mario property. However, it’s an absolute no-brainer if you’re part of a big family who enjoy Mario sports games. This is another heavy hitter from Nintendo with a sound gameplay loop and a decent skill ceiling. It’s not Camelot’s best Super Mario sports game on the Nintendo Switch, but it’s a smart twist on golf that will please the whole family.