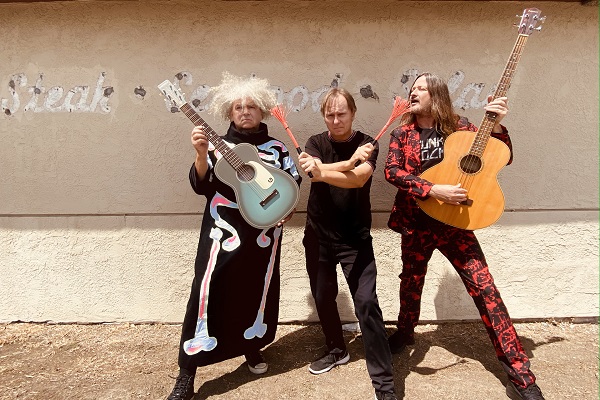 The Melvins – Story by Anne Erickson, photo by Bob Hannam

Melvins are bringing a novel sound to their catalog with a new, acoustic record called “Five Legged Dog” featuring songs from throughout their career

Melvins are gearing up to release a newly recorded, career-spanning acoustic record, called “Five Legged Dog.” In advance of the 36-track album, which hits stores Oct. 15, the longstanding alternative group has posted an innovative, unplugged version of “Night Goat.”

“I think people will be surprised that we can do an acoustic version of a song like ‘Night Goat’ without losing any of the heaviness,” Dale Crover said in a statement. “We also worked hard on the vocal arrangements. People are going to freak out!”

The anthology features a huge range of songs, from 1987’s “Gluey Porch Treatments” to 2017’s “A Walk with Love & Death,” pulling tracks from their entire career together. “Five Legged Dog” also includes unplugged renditions of several rarities, such as a cover of Redd Kross’ “Charlie,” a Turtles’ cover from the “Slithering Slaughter” single and new covers of The Rolling Stones’ “Sway,” Brainiac’s “Flypaper” and Fred Neil’s “Everybody’s Talking.”

“I knew I wanted to do something ridiculously big,” Osborne said regarding the project. “Thirty-six songs reimagined by us acoustically is certainly ridiculous but it works. The magic of the songs is still there regardless of it being acoustic. Since we weren’t touring we had the time to do something of this size.”

Osborne added, “I’m very excited about this record. Dale and [bassist] Steven [McDonald] did a fantastic job on this. I think it’s a very special record. I can’t think of anyone else who’s done something like this.”

“Five Legged Dog” is available for pre-order in CD and vinyle formats via Ipecac Recordings or digitally on Amazon. For pre-order information, head to the Melvins’ website. Listen to the band’s “Night Goat” below.