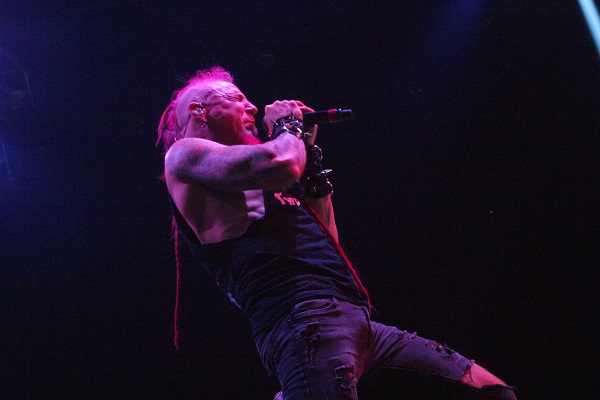 Chad Gray of Mudvayne and a handful of the band’s crew have tested positive for COVID-19, forcing the group to cancel their upcoming Louder Than Life appearance

Mudvayne were slated to bring their reunion show to this weekend’s Louder Than Life festival in Louisville, Kentucky, but the band has canceled their performance, due to frontman Chad Gray and a few of the band’s staff testing positive for COVID-19. The festival took to social media Tuesday (Sept. 21) to announce the news, and Mudvayne also released a statement.

“After taking every precaution to follow CDC Covid protocols during rehearsals and recent performance Chad Gray and a few staff members have unfortunately tested positive for Covid-19,” Mudvayne said. The safety of our organization, fans and festival partners must come first.

They continued, “We are left no choice but to cancel our performance at Louder Than Life this weekend. Apologies to all the fans attending the festival this weekend. We look forward to getting everyone healthy and ready for our Aftershock and Welcome to Rockville performances later this year. We appreciate your love & support throughout these unprecedented times.”

Breaking Benjamin will step in for Mudvayne on Louder Than Life’s Sunday (Sept. 26) bill. Over the summer, Nine Inch Nails also pulled out of their headlining performance at the festival, including all of the band’s 2021 gigs.

Mudvayne performed their first show together in 12 years on Sept. 11 at the Inkcarceration Music & Tattoo Festival in Mansfield, Ohio. While Gray and company still sit out Louder Than Life, they’re still on the bill for Aftershock, Oct. 7 to 10 in Sacramento, California, and Welcome to Rockville, Nov. 11 to 14 in Daytona Beach, Florida.

Gray is far from the first touring artist to come down with COVID-19. Other musicians who have tested positive over the past few months and were forced to cancel or postpone shows include Jonthan Davis and Munky of Korn; Leigh Kakaty of Pop Evil; and Paul Stanley and Gene Simmons of Kiss, to name a few.