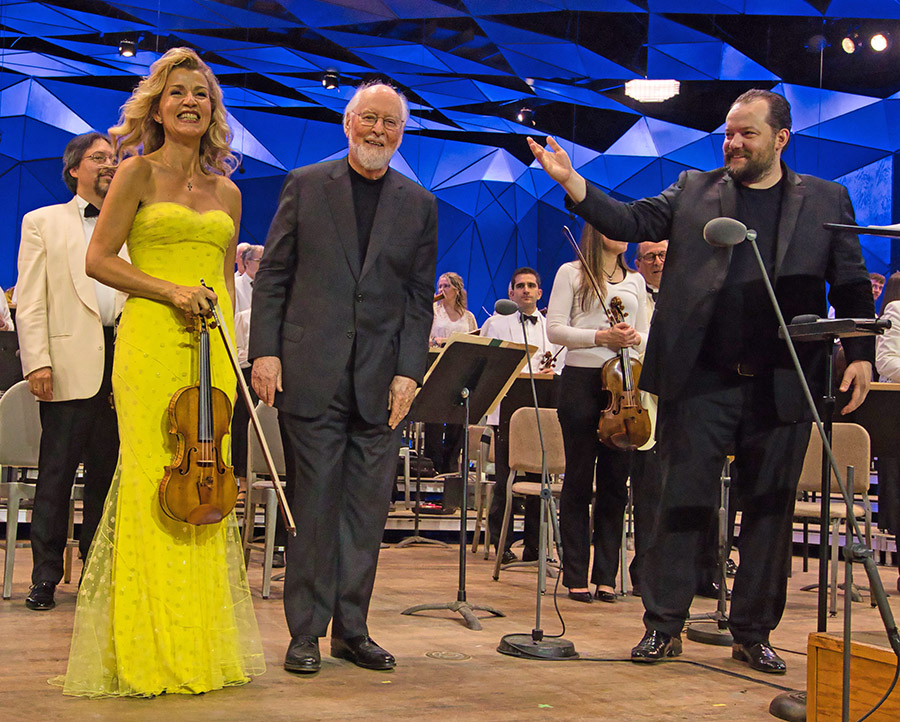 On the evening following the Boston Pops’ tribute to the best-known music of John Williams [my review HERE], the composer himself took the stage in the Koussevitzky Music Shed to lead the Boston Symphony in the first performance of his Violin Concerto No. 2, written for Anne-Sophie Mutter, the great German violinist for whom he had already written another concert piece, Markings for violin and orchestra, premiered at Tanglewood in the summer of 2017. In 2019 the pair appeared for a program of music specifically requested by Mutter, a series of excerpts, most familiar ones, from his film scores, arranged for solo violin with orchestra. In this case, he careful rethought the chosen selections to give them a different sonority and color and character from the original versions. And now Williams has written his second violin concerto, for a musician whom he clearly admires greatly, and who has devoted a substantial part of her career to motivation the creation of major new works for her instrument from leading composers.

Williams’s first violin concerto, his first substantial concert work to be recorded, was composed in part as a tribute to his first wife, the actress and singer Barbara Ruick, to whom he was married for eighteen years before her death. Like his other music created with concert performance in mind (mostly concertos for musicians with whom he has been connected over the years), the music flows without question from the same musical mind as the famous film scores, with the same mastery of color, sonority, and control of the orchestra. But it is also in many ways more intense and spare, with (generally speaking) less of the sheer lushness that dramatic Hollywood scores often demand. Thematic expression and development is present, certainly, but it tends not to offer itself up as a series of “tunes.” Still, as recordings of his other concertos has shown, depth of expression comes forth to be recognized with opportunities for rehearing—which, of course, is the case with almost any new music.

In writing for one of the greatest violinists of our time, the composer can be confident that she can project anything he can imagine. And having worked with Mutter on numerous occasions, he has been able become familiar with her personality as a musician, and to conceive ideas that speak to that knowledge. The concerto is laid out in four substantial movements, running thirty-four minutes in all: Prologue, Rounds, Dactyls, Epilogue. Though the terms prologue and epilogue might suggest a short appendage to a larger work, both are full-fledged movements balancing the two inner movements. The four sections proceed almost without any break. Some parts of the score, especially in the first two movements were designed to play to composer’s realization (while recording his arrangement for violin of film scores) that Mutter has “a surprising and remarkable feeling for jazz improvisation,” as he described it, So, he began the concerto in an improvisatory style that gradually firms into a lively rhythmic character.

Another jazz reflection comes in Rounds, so called, because he thought of it as being circular, with harmonic references to Williams’s “early hero,” Claude Thornhill. The overall character is gently murmuring; a theme that appears here returns in the last movement.

The word Dactyls is something of a scherzo. The term “dactyl” refers to the fingers—appendages that are exceptionally busy for a violinist; but it is also used in perceiving the metrical “feet” in poetry, where a three-beat pattern with a stressed first beat followed by two unstressed beats, sets up an energetic rhythm, at whatever dynamic level the music unfolds. The harp joins the violin here in a balanced role, almost the equal of the main soloist. A striking triple cadenza links the violin, the harp, and the timpani. Upon reaching a climactic point, the solo violin proceeds directly into the final Epilogue with its co-conspirator, the harp. In contrast to the rather assertive opening of the concerto, the ending joins the harp and violin gently in a peaceful resolution.

The concerto was crisply performed, with the wide range of characters. Anne-Sophie Mutter gave an extraordinarily complete expression of the various mods and styles, and she was superbly abetted by harpist Jessica Zhou and timpanist Timothy Genis.

Because the Tanglewood concerts this season are performed without intermissions (to minimize interaction among audience members as a still-risky period for the Covid pandemic), the remainder of evening comprised three 15-minute pieces under Andris Nelson’s batons.

A string orchestra piece called Starburst by the up-and-coming composer Jessie Montgomery (born 1981), who has just begun a three-year position as composer-in-residence with the Chicago Symphony, started the set. She grew up on New York’s Lower East Side. A violinist who trained at Juilliard, she has played with several string quartets (currently the Catalyst Quartet), and is affiliated with the Sphinx Foundation, which helps the advancement of musicians of color. Starburst begins with a tonal image that resembles a supernova, in which a dying star explodes with a brilliant shower of star material—or tonal material in this case. It sends out a vivid spray of sound shattering into miniscule bits whirling in orbit, or out of it. The material seems to lose energy as it dissipates into aural space, but some force (musical gravity?) brings it back together for the dynamic close.

I admit that I have frequently found Aaron Copland’s Quiet City one of his least satisfying scores. Partly, of course, because—like many others, no doubt—I have been captivated by the vigorous energy of his ballet scores and other works. But in this concert, Nelsons gave it an expressive warmth that I have rarely heard before. The ensemble, basically a small group of strings, plus two soloists, trumpet and English horn, has often sound expressively stiff in its setting of a character’s thoughts, worries, doubts. But on this occasion, the strings sang lyrically, their sustained lines shaped to vary the mood even over the course of a phrase or two. And the soloists, trumpeter Thomas Rolfs, and English hornist Robert Sheena, entered the mood with exceptional warmth and color, particularly in one passage where the trumpet sustained a long note, gradually fading from forte to piano, only to have the English horn, which had matched the same note quietly and with perfect intonation, be there, changing the sound from one instrument to the other with a smoothness that was simply magical.

A suite from one of the most colorful ballets of the early 20th century closed the show. Stravinsky’s Firebird was the first of the three great dance scores for the Ballets Russes (between the years 1910 and 1913) that cemented his fame. It has, of course, been played many, many times by the Boston Symphony, and it features the kind of orchestral treatment that makes an orchestra like the BSO come out in full glory. Such was the case here. Nelsons balanced the very diverse elements of the earlier part of the concert into a final phantasmagoria of color.