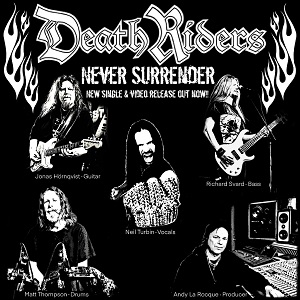 Neil Turbin is gearing up to release DeathRiders’ debut album, “The Metal Beast,” and metal fans should expect a mix of everything from power to thrash to neoclassical on the collection. Turbin and DeathRiders recently released the album’s debut single, “Never Surrender,” which features a mix of thrash and melody, with a strong melodic-yet-heavy sound.

Speaking with Anne Erickson of Audio Ink Radio during the below video appearance, Turbin explained that he has a great writing chemistry with DeathRiders guitarist Jonas Hornqvist. The band also brings together bass player Richard Svard and drummer Matt Thompson.

“With Jonas, he’s very thoughtful and very complete in terms of how he writes, so it’s a very full, completed song, usually, from start to finish,” Turbin, who is the original voice of metal band Anthrax, told Audio Ink Radio. “For DeathRiders, I write music, as well, and there are certain songs that are composed by both of us together…and certain songs where he just sent it over, and it was turnkey- it just worked out precisely perfectly from the beginning. Then, there’s ones where I wrote all the music and all the lyrics and everything, so I play guitar in a demo to kind of get it forward. So, there’s a variation.”

Turbin adds that the new album features a variety of songs, with many leaning on thrash, progressive melodic-meets-thrash and neoclassical The new single, “Never Surrender,” is a song that came together naturally and fluidly, so it was an apt pick to release first.

“‘Never Surrender’ was one of these ones that really appealed to me,” Turbin says. “I liked a lot of things about the song, so I naturally felt it was something I could really grasp and write to, and the melody just came really quickly and the lyrical idea.”

“I never really had a proper nickname, and I’m not really sure that’s my nickname, but that’s the energy of where we’ve been headed,” he added. “It’s definitive of the collection of songs and also for DeathRiders. What we do is beasty. We go up there and give it a 1,000% and push hard.”