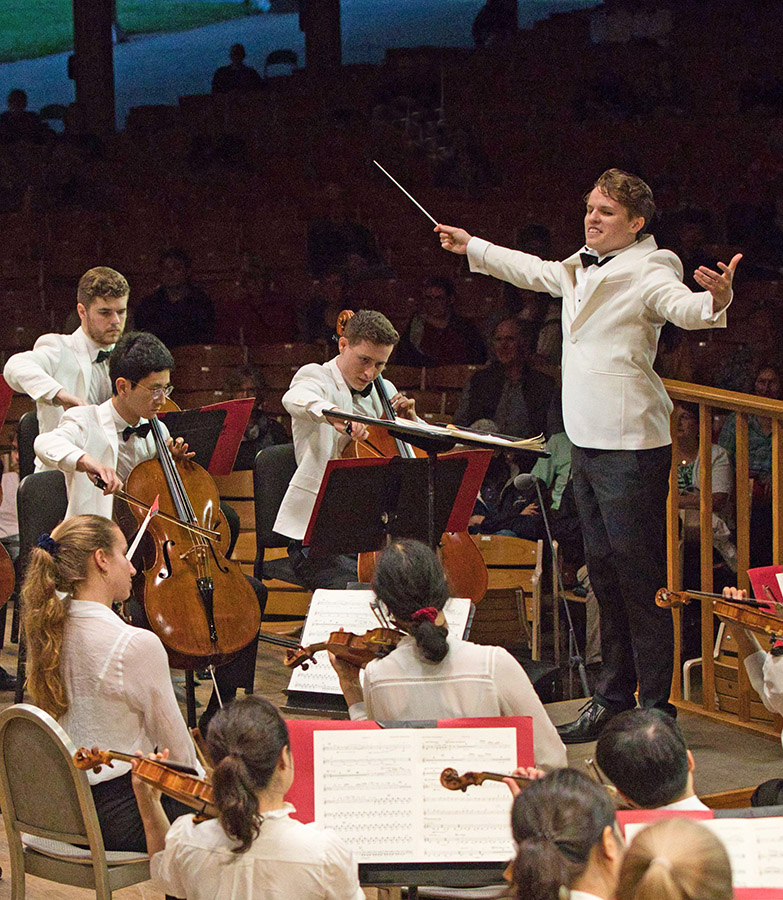 One element has always accompanied the opening of Tanglewood: The reappearance of the Tanglewood Music Center and the weekly concerts of the TMC Orchestra in presentations featuring conducting Fellows who  prepare pieces under the direction of a master conductor, who also directs the major work on the program. For the first two weeks of this season, BSO Music Director Andris Nelsons led the closers and coached the Fellows. For the remaining four concerts (all on Monday evenings at 8pm), the role will go to Thomas Adés and Stefan Asbury (July 26, part of the Festival of Contemporary Music), Alan Gilbert (August 2), Herbert Blomstedt (August 9), and Stefan Asbury (August 16)

This summer Ozawa Hall, the customary locale for these show, is closed. The much larger Koussevitsky Shed simplifies the matter of social distancing.

Adam Hickox opened on July 12th with the suite from Appalachian Spring. One of Copland’s best-known works by far, it’s not easy piece to play, especially in the full-orchestra version rather the ensemble of 13 instruments for which Copland originally scored it (because that was all that would fit on the stage in the Library of Congress, where the premiere took place). Copland enlarged the orchestration, partly so that he could conduct it. Indeed, he recorded it with the Boston Symphony in that form.

Hickox gave the quiet passages, often featuring one or a few sustained woodwinds (flute, clarinet) a luminous shimmer with the hushed support of the strings, softly sustained in long-drawn bow strokes. These quiet passages, both at the beginning and in various returns throughout, captured the dreams of the ballet’s protagonists, the newly wedded couple building their home on the American frontier in the early 19th century (when the frontier was still far closer to the Atlantic than it became later in the century). The real difficulties of Appalachian Spring come in the fast sections, where changing meters and scales racing up and down risk losing coordination. Hickox’s crisp beat cued the vigorous rhythmic irregularities, so that they made their points clearly. Only occasionally, in the fastest and most unbuttoned passages, marked by rapid scale passages in contrasting directions, did the ensemble occasionally slip minutely, perhaps a result of sheer enthusiasm. But it recovered quickly, and in the sustained, quiet close, Copland’s pandiatonic harmonies projected a sweetness—without sentimentality—that is one of the characteristic features of this score.

Kevin Fitzgerald led the music by a composer new to Tanglewood. Hannah Kendall was born in England, to Guyanese parents in 1984. She grew up in a multiethnic region of London where she absorbed a wide range of cultural traditions, from the widespread African diaspora as well as East Asian, Caribbean, and white European. Many English orchestras have given her compositions, but her Disillusioned Dreamer marked her first commission for an American ensemble, the Berkeley Symphony Orchestra, which gave the first performance in 2019. She often draws her fundamental impetus from a literary passage or some visual art. Here she chose a passage from Ralph Ellison’s Invisible Man depicting the discomfort felt by a Black man in a space filled with white men of various ages. The narrator described himself as a “disillusioned dreamer,” while experiencing the people in the gathering “affecting the pseudo-courtly manners f certain southern congressmen.” Not specifically descriptive of the text, the score begins with a passage of nervous fragmented sounds, gradually growing in intensity and taking on greater substance and solidity, to a sense of awareness (on the part of the protagonist), and passing away with much of the opening fragments, suggesting an ongoing, largely unchanged background to life. Fitzgerald brought the ephemeral and the more solid musical elements into a clear shape and expression.

Then Andris Nelsons led a performance both lyrical and witty of Beethoven’s Fourth Symphony, doubly welcome for being probably the least-often heard of the nine. He shaped the slow, long-held notes of the Adagio introduction with a wonderful songful mood, swelling and returning with sonorities that seemed alive throughout. The contrasting lively portions, throughout the symphony, came to live with vivid energy and wit, all the way to the final page, where the frantic theme of the last movement recurs in the solo bassoon, played slowly, as if in utter exhaustion, when the rest of the orchestra brushes him of and races to a quick close.

On July 19th, high humidity obtained in the Shed (though the weekend’s rain held off during the concert itself), and with a slight chill in the air. Nelsons conducted two of four works, both somewhat shorter than the customary “big” closer, yet all four, to a certain degree, conversed with one another: an early classical symphony, and a neo-classical delight from the 20th century. The Fellows led numbers that provided balance, representing the beginning and end of the romantic era.

Beethoven eventually created four overtures to Fidelio, three of them titled overtures to Leonore (the original name of the opera), and the last now known as the Fidelio overture. Adam Hickox chose the Leonore Overture “No. 2” (though it was actually the first composed). Many of the ideas so familiar to listeners in the better-known and intensely dramatic overture “No. 3” (the second to be composed) already appear in the earlier work, though in a rather inchoate form. It is fascinating to get the original attempt, since Beethoven was trying an unusual idea, one that he evidently considered a failure. He wanted to have a solo trumpet offstage, as it happens at the dramatic high-point of the opera, to signal the arrival of the official who will uncover the behavior of the villain and save the life of the hero. But in “No. 2” Beethoven dared to have the solo trumpet call interrupt the form of the overture at the “wrong” place, where it both makes the expected form unclear and (in the opera house) gives away the ending before the show has even started. Adam Hickox led with wonderful control of the orchestral color, suggesting the darkness of the prison setting and Florestan’s deeply spiritual aria in the dungeon, bemoaning is unjust imprisonment; then the energetic closing passage reassures us that the good guys will win.

Kevin Fitzgerald led a Rimsky-Korsakov’s second orchestral score (following his youthful first symphony), the Overture on Three Russians Themes, Op. 28. The main theme, a familiar one to listeners, whether they know the string quartet literature or the operatic repertory, forms the basis of much of the score: “Slava” (Glory) was used by Beethoven in one of the quartets commissions by the Russian ambassador to the imperial court. Count Razumofsky. The melody appears in the Scherzo of the second Opus 59 quartet. And it was brilliantly employed in the opening scene of Boris Godunov, where a crowd of peasants must sing it to honor Boris as the new czar. The other two themes, both lively compared to the formal sobriety of “Slava,” are quite similar to one another and easily fuse, the one into the other. Perhaps the most striking feature of the overture is the colorful and varied orchestration, a skill of which Rimsky was to become a noted master. Indeed, the frequently nasty critic, Cesar Cui (nasty despite being one of the members of the circle of Russian nationalist composers that included Rimsky), noted of this early piece, “Mr. Korsakov’s gift for instrumentation is evidently developing.” It is pleasant to hear a generally unknown work by a composer of renown, and Kevin Fitzgerald shaped the warm colors of the “Slava” in all its diverse appearances with suitable gravity, while the dance-like faster these were light and airy, producing the range of color throughout the TMC Orchestra.

Originally placed last on the printed handout, Haydn’s Symphony No. 3 in G Major came instead between the Beethoven and Rimsky-Korsakov. Modern orchestras rarely offer early Haydn symphonies (the only previous performance of Haydn’s No.3 by any BSO-connected ensemble came from the Boston Pops under Arthur Fiedler on the Esplanade in Boston, in the summer of 1929). An early work it might have been, but it is bracing for all that, filled with vigor and full colors from his small orchestra in the opening movement, a graceful slow movement, and two final movements that both show Haydn’s pleasure in creating canon, a device that few composers after him used as frequently as he did. Hearing this early work gives us a welcome opportunity to drop in on the early years of a composer whose technical mastery and fresh ideas would continue for almost another half century. Nelsons gave the orchestra the impetus to be playful and energetic or delicate, or sober (with concealed wit) by turns.

If Haydn gave us a chance to experience the middle 18th century as it actually sounded, Stravinsky’s Suite from the ballet Pulcinella takes on a 20th-century composer’s visit to that era. The ballet, based on many pieces once attributed to Pergolesi (a few of them were actually by him), derives from the commedia dell’arte. Stravinsky rearranged and orchestrated these old keyboard compositions in his then current style. Nelsons projected the witty musical ideas with great charm. Disappointingly, though, the ensemble required for Pulcineall is too small and too varied to sound effectively in the Shed. The brass projected beautifully, but the strings sounded disadvantaged. In Ozawa Hall, the balance would have been perfect.