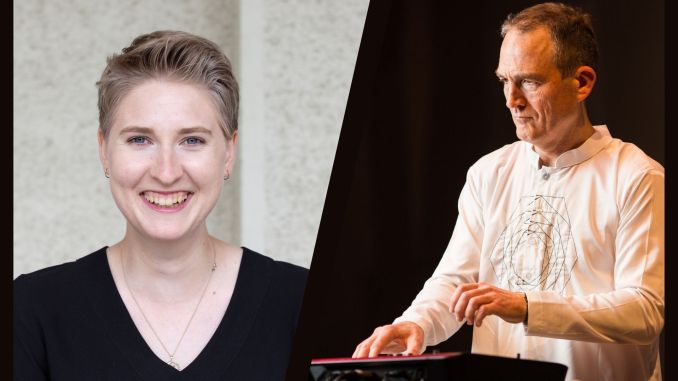 The Australian National Academy of Music has connected 67 musicians with 67 composers. The idea is to create a vast collection of new local music, which will represent who these artists are — and how they understand and perceive the world around them.

The ANAM Set unites these creative minds in a unique way, allowing them to work closely together as they build something new and long-lasting. In this interview, which forms part of our series on this commissioning project, we chat with pianists Hannah Pike and Michael Kieran Harvey. Hannah and Michael have collaborated on a new composition called Death Cap Mushroom, and it’s a work with a powerful message.

So tell us, what appealed to you both about The ANAM Set?

HANNAH: I think it is so important for musicians to be collaborating with composers of our time. Don’t get me wrong, I love traditional classical repertoire as much as the next person, but I believe creating new music is fundamental to expressing the experiences of today.

MICHAEL: I have been involved with ANAM from its inception in the mid-1990s, and always have found it open to new works and ideas. So the opportunity to once again work with emerging artists who have a similar outlook to mine — of curiosity and interest in the future of music, all kinds of music without prejudice or boundaries — really appeals to me, especially in this new, challenging pandemic era.

The ANAM Set seemed to me an opportunity to work again with Hannah, who I found incredibly easy to work with on my Catalogue des Errances Bibliques (‘Catalogue of Biblical errors’) project in 2019, as she took to the avant-garde keyboard writing and improvised material with ease and relish. The resulting live CD recording shows that her skills in these areas are at the highest level.

The piece I wrote for her for The ANAM Set, Death Cap Mushroom, is a work that exploits her powerful rhythmic approach to the keyboard, her versatility and ensemble skills in working with a death-metal drummer Alex Bull, and a quite intricate playback track. This satirical work is born out of deep horror at right-wing extremism and racism in the United States, the George Floyd incident in particular, and so the text by [Hobart-based medical practitioner and Iyengar yoga teacher] Arjun von Caemmerer is most appropriate as an integral part of the work.

Michael, we’re going to come back to those themes. But first, I’d like to ask — what potential did you see in this collaboration, including the benefits of both having piano as your main instrument?

H: I worked with Michael at ANAM in 2019, and his passion and wit was so infectious that when I found out that I was working with him again, I couldn’t wait to get started!

The idea I had for a metal-inspired composition is a bit left-of-field, but I knew that Michael would be the perfect man to bring this idea to light. He’s also an incredible pianist, so I know he won’t make it too easy for me, but I know it won’t be impossible either!

It was also very useful that we both speak ‘piano language’ whilst we were discussing the piece over email after our initial zoom meeting.

M: Although I’m at the end of my career, I still think I can offer students something useful if only in the area of attitude. It’s important to me that young Australian musicians don’t feel they have to deal with the Australian cultural cringe in terms of both their own psychological mindset and in the audiences they are being groomed for, as I had to. There are so many different possible paths in music thanks to technology — audiences are anywhere in the world, now — so the fusty old crowd that constituted the Australian classical audience I grew up with no longer dictates taste anymore; not through want of trying, I might add, but they’ve lost control, thankfully.

The collaboration with Hannah is extremely inspiring for me as she is very aware of what is happening in other genres of music, and is not even conscious that this hegemony is an issue anymore. So collaborating with her was very liberating, as she doesn’t have a ‘classical’ music hangup to overcome. Like me, she is ‘post-classical’ in outlook: looking at the possibilities of notated and improvised music, rather than hermetically sealed traditions of piano playing that are passé and stone-cold dead.

So what has been the process of your collaboration so far?

H: I have great respect and trust for Michael, so there hasn’t been a huge amount from me. I was so excited to work with Michael, and I love his compositions, so I really wanted to have a truly MKH piece.

In saying that, after Michael had agreed to my crazy idea I sent him a lot of YouTube links to some amazing bands and musicians that I love, and we chatted about the practicalities of performing what he had written — like making sure my hand was big enough to reach everything.

M: Mainly remote collaboration, Zoom calls, and emails to ascertain the instrumentation and what kind of writing Hannah would like. After a lot of correspondence initially, I was able to get together a score and assemble playback and rehearsal tracks, which I sent her and which she and Alex have been rehearsing with. This seemed the most efficient way of interpolating the text and also lead guitar elements — brilliantly realised by Ben Cannings — as the rhythmic synchronisation is quite complex. This was a technique I used for the previous ensemble work I wrote for the ANAM keyboard and percussion players, Catalogue des Errances Bibliques.

Hannah, this composition is a unique one in that your partner, percussionist Alex Bull, has also been written into the work. How and why did this special inclusion come about?

H: Yes! As Michael and I were discussing electronic tracks, he mentioned that we would really need drums to make sure it was sounding like a progressive metal track. As my partner is the one who got me listening to a lot of this music in the first place, I knew he would be very keen to perform it with me, so I suggested it to Michael. And the rest, as they say, is history!

Okay. Let’s talk about this music and where it stemmed from.

M: I was simply appalled at yet another murder of a person of colour by an authority figure representing a system that oppresses minorities and encourages white supremacism and Nazism. This emotion and desire to channel the antithesis of what might sound ‘acceptable’ in a hallowed space built with the spoils of such a system motivated the surface sound of the work.

The text of course nails down the satirical intent of the piece, but its delivery by the amazing Ben Cannings is so distorted that words cannot be made out, an aural morphing in line with Jacques Attali’s concept of noise. This is executed over a toy piano that suggests white privilege, playing music that mocks functional diatonic harmony as a tool of oppression.

Surrounding this is music that would not sound out of place at a Proud Boys gathering, but interpolating a code of Marxist equality through the use of Schoenbergian dodecaphony and asymmetrical prime rhythms that would have these oxymoronically named white ‘supremacists’ falling flat on their faces, hopefully.

‘Prime’ has two meanings in this context, and the challenge was to create something virtuosic enough for Hannah to play at the same time as satirising the simpleton ‘culture’ of thuggery and racism that underpins many majority white societies including ours.

H: I can’t imagine writing about systemic racism, and the associated atrocities, is an easy task. I really admire Michael, Arjun, and Benjamin for giving so much more depth to my ‘I want to play a piece that is inspired by progressive metal’ idea, and am very excited — and slightly terrified! — to perform it.

Death Cap Mushroom is bold, unapologetic, and deliberately incongruous, and it forces the listener to consider some very real and perhaps uncomfortable truths.

Michael, when chatting with ANAM about your collaboration, they filled me in that you wanted to explore ‘anti-operatic elements’ and ‘the strictures of the plague and long-distance collaboration’. How would you define these underlying concepts, and how do they appear in your music?

M: Anti-opera is a well-established genre pursued by many composers and musicians frustrated by, turned off by, amused by, or shut out of the hegemony of classical music. Therefore, to engage in anti-opera means engaging with by far the largest proportion of musical genres, and those of the greatest relevance to most people.

The way anti-opera is manifest in Death Cap Mushroom is mainly through the use of a recording for the vocals — not a live singer — which are delivered in a decidedly non-operatic fashion, making the satirical poetry of Arjun von Caemmerer almost unrecognisable, but not in the way opera traditionally makes text unrecognisable via wobbly sopranos and strangled tenors.

The instrumentation — piano, toy piano, rock kit, referee’s whistle, siren, metal guitar — is also anti-operatic, as is the scale of the work, being very brief, 7 minutes, and limited to two performers.

The strictures of the plague and long-distance collaboration meant that there was a lot of file-sharing going on prior to me writing the work in Tasmania. From Melbourne, Hannah would send me videos of her performances and also of Alex Bull’s excellent drumming, and I would respond with videos of my own musical enthusiasms until we started to get an idea of what we all wanted to explore musically.

At the same time, Covid lockdowns made life very difficult, yet still white ‘supremacy’ was making headlines with the ongoing ramifications of the George Floyd incident. Opera is still very much aligned with hegemony.

What do you hope will be the impact of your collaboration?

H: Firstly — and perhaps most importantly — I hope that Michael’s piece will encourage people to think deeper about the issues that we are being faced with around the world. I also hope that it might start breaking down the barriers between other genres of music. Classical music has often collaborated with styles such as jazz and folk, but I know many people are put off by heavy metal. I want to show how incredibly musical metal actually is – many progressive metal bands are actually classically trained!

M: I hope, above all, that Hannah and Alex enjoy playing it. I would regard it as a great failure otherwise. They are such terrific young people, and fabulous musicians!

At the end of the day Hannah, what do you most hope to learn from Michael through this opportunity?

H: I hope that I can take even a tiny bit of his confidence and unapologetic approach to making music. Michael knows what he feels is important, and isn’t afraid to create meaningful and boundary-pushing work that aligns with his views. I feel incredibly lucky to have had an inside view on Michael’s creative practices, and look forward to working with him again in the future!

Michael, any parting words about this groundbreaking commission project that is The ANAM Set?

M: I’m just very grateful and honoured to be a part of such a positive initiative by ANAM in this incredibly challenging new era for live performance. Let’s hope such commissioning programs continue and grow for the sake of the young musicians and composers already committed to a career in music.

Visit the ANAM website to keep up to date on this commission, and to learn about The ANAM Set.

READ MORE: Could this be Australia’s biggest-ever commissioning project?