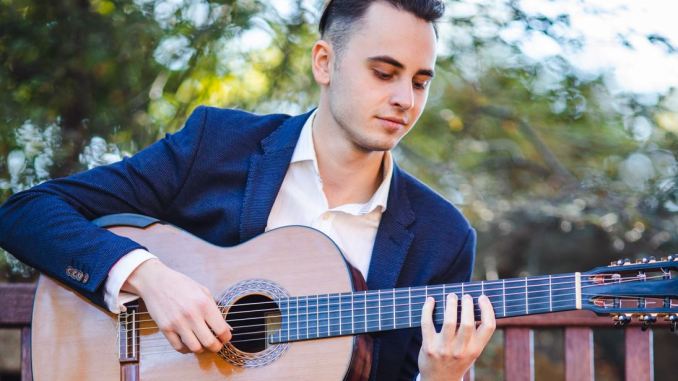 We’d like to give a warm welcome to Heathcliffe Auchinachie in his first story as a CutCommon contributor!

I’ve known Wollongong guitarist Nicolas Serray since we commenced our degrees together at the Sydney Conservatorium of Music.

Nicolas graduated in 2020, majoring in classical guitar. We’ve remained friends and collaborators ever since, so I decided to speak to him on Zoom about an upcoming performance of his.

Nicolas will this weekend host an online recital fundraiser for Support Act. Performing a program of classical guitar music, he aims to reach a target of $1000 to contribute to the charity’s grants and mental health support for musicians and crew members. At the time of writing, he’s already raised $800 before the event itself.

Support Act is a national charity delivering crisis relief and services to the Australian music industry. And as a member of this industry, Nicolas understands the value of supporting fellow performing artists.

Nicolas owns and manages aTempo Music Tuition, through which he provides education in classical guitar and music theory. Outside classical, though, he’s also the bass player for Wollongong/South Sydney band Duckboi, led by multi-instrumentalist and long-time friend Jack Lincoln. The indie/surf-rock band will release its next single at the end of this long pandemic year.

Nicolas, your recital on Sunday helps such an important cause. What was the motivation for doing an online recital to fundraise for Support Act?

The main thing was seeing a lot of my friends and professional collaborators go through some hardship and lose a lot of performance opportunities because of the pandemic and the lockdown over the past 13 weeks.

It’s been sad to see how depleted the industry has become. We had this somewhat false sense of security, between this lockdown and last year’s lockdown, that the arts industry was going to recover and go back to normal. And this lockdown shows it is very fragile, and there are a lot of steps that need to be taken.

I wanted to do my part to help out, because what Support Act does is great, there’s no disputing that. It’s the only organisation that [helps musicians in this way, and] provides financial support and mental health support.

Throughout the lockdown, it’s been super evident that [Support Act has] been needed for these people, because it’s such a tough time. We’ve seen, over the past 18 months, shows being postponed indefinitely, and then inevitably being cancelled, and that’s a huge chunk of income for those people just gone. And then what are they supposed to do? You rely on that money to live.

The support that I wanted to give was straight to the performer themselves through Support Act. I wanted to help at the artist’s level.

How have you found preparing for an online recital, as opposed to a face-to-face concert? Have you encountered any challenges, or are there aspects to the preparation process that you’ve found preferable to preparing for a live recital?

That’s a good question. I feel this setting suits me better. Because I do have a bit of performance anxiety, I feel like doing it online and not having the pressure of the live audience does make it a little more comfortable for me.

In terms of preparing for it, I have had a steady practice regime since I’ve graduated, so that’s helped. I didn’t have to do too much preparation outside of what I’ve usually been doing to prepare for the recital in terms of playing. I was able to do about a week or two of bringing together some old repertoire that I use to play, and fine-tuning some of the pieces that I’ve been working on as of late.

Some other things out of the ordinary from doing a public recital, like the audio and the recording, have posed some challenges. I’m not the savviest recorder of music.

It wasn’t something that was completely foreign to me, because I’ve done some recording in the past. I’ve made YouTube videos; and I’ve had to put a video to audio, and mix it and edit it. But it’s been quite sporadic. So when I’ve had to revisit it now, I’ve had some issues with the learning curve with some applications. And there’s always things to learn with recording, it’s all about trial and error. A lot of hours were spent trying to get the best sound possible. So hopefully, that does come across on Sunday.

Something that is closely related to a recital is the advertisement of the recital. And again, it’s not something that I have a huge amount of knowledge in. I’ve just sort of been taking it day by day, and seeing what works and seeing what doesn’t. I did make the Facebook event, I published the MyCause page for people to donate to SupportAct, and I’ve been using those two platforms interchangeably to advertise the recital. And I feel like I’ve had a good amount of traction, I’ve had some organic reach with that. It’s been mostly people I know personally, which is great. But I have been able to reach out to a few other people that I don’t know personally, which is really good. And I did have an article published in the ClassikOn newsletter this week, which helped a lot with that as well.

The past 18 months forced pretty much everyone to figure that stuff out — the recording audio side and the social media side. I feel like I put off learning that stuff, because there was no urgency. And now there’s no other option. So, I’ve found that aspect challenging too.

Tell us how you chose the program. Did the online context influence your choice of pieces?

I wanted to do a mix of staple classical guitar repertoire pieces, and a mix of pieces that I’m really interested in and have been learning this year.

There is a heavy Spanish influence on the program, and also a [Spanish composer] Francisco Tárrega influence, which is not intentional but that’s just how it happened. But there are a few little nuggets in there, so hopefully it will please most people.

So you feel like it enabled you to take some risks with your playing?

Yeah definitely, both with the programming and execution.

With my performance anxiety, it can limit me technically on stage, and I’ve had some pretty nasty experiences in the past. Being able to do it in a comfortable setting online allows me to be freer and more focused on the music, so I wanted to showcase some of these more difficult pieces that I’ve been working on.

There’s a lot of variable factors. It’s been many decades of an altogether underfunded industry, and it’s been largely taken for granted. It’s safe to assume that everyone does listen to music, they enjoy music, they go to concerts, listen to the radio. And I don’t think we fully understand as a society, in Australia, that for people to be able to do this, it takes many years of dedication and sacrifice to get their art to a platform to be reached by a large audience. It doesn’t happen overnight. They need support, not just at their level, but from higher sources like the government. We need opportunities to be able to showcase our art, and allow people the chance to make these sacrifices to work on their art, and perfect it and hopefully reach a professional career.

Do you think that some of the issues you’ve raised are unique to Australia?

One hundred per cent. I think the way we view musicians and artists in Australia is not the same way as, say, Italy or any other European country that puts musicians at a higher level. Over there, music is regarded as a legitimate professional career, but it’s not the same mindset here.

It won’t change overnight, but we need to start introducing the idea that artists and musicians are strong-minded and dedicated people who work at something for many years to try to perfect their craft.

We are a sporting nation – everyone loves their sport, no one bats an eye when millions and millions are poured into the AFL and the NRL. Why can’t we have the same with the arts?

You perform as a solo classical guitarist, but you’re also a member of the band Duckboi. How has Covid affected these two facets of your performing career?

It has been different, because classical guitar in a performing sense for me has taken a bit of a backseat. Ever since I graduated, I’ve maintained a somewhat steady practice regime, and haven’t really looked ahead to have too many performing opportunities. So, in terms of the lockdown and pandemic affecting classical, it hasn’t been too bad.

But for Duckboi, we were planning, and are still planning, a single release sometime before the end of the year, and then hopefully doing a week-long tour when it does come out. And it’s up in the air.

We didn’t just want to stick to New South Wales, we wanted to check out Victoria and Queensland. Pretty much an east coast tour, that’s what we had in the pipeline. Those plans, again, have been put off indefinitely. So, we don’t know when that will happen. And even if we do get a clear idea of when we can start performing again, we don’t know if we can financially support ourselves to do it.

It’s not just knowing if we can or can’t gig, it’s ‘can we support ourselves to actually make that possible?’.

In lieu of this current lockdown, what’s on the musical horizon for you?

I’m still dedicated to Duckboi. I’m diving in headfirst with that; super keen with whatever we choose to do with that coming out of the lockdown.

In terms of classical, it’s nice for me to know that I don’t have anything set in stone. I’m very content with keeping up my practice and working on my technique, and not having a deadline to bring 50 minutes’ worth of material to a public recital, for example.

However, in saying that, I have somewhat of a goal. I’m thinking of doing Sydney Eisteddfod next year, so that could possibly be something I can set my sights on.

If any other performance opportunities come up within the area – or if Jeremy Boulton, a frequent collaborator of mine, wants me to do something with him – then I’m more than happy to do that. But nothing set in stone with the classical side of things.

Nicolas Serray will perform his online recital fundraiser for Support Act at 2pm September 26. The recital will be live on YouTube, with a link provided ahead of the event. Donations are now open.

If you like, you can say thanks to Heathcliffe for volunteering his time for Australian arts journalism during COVID-19. No amount too much or little 🙂