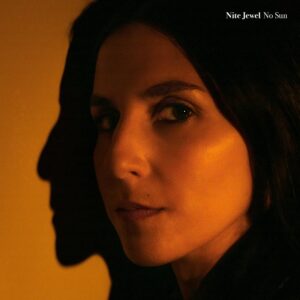 How closely does art imitate life and vice versa? It is a question that has been debated since antiquity. Ramona Gonzalez, who records as Nite Jewel, provides an offering that serves to revive the debate. Nite Jewel has released No Sun, her first full length in four years, on her own imprint, Gloriette. It explores mourning and loss. Not so coincidentally, Gonzalez is researching those same themes in her graduate work in musicology at UCLA: women performing mourning songs and rituals. Another wrinkle is that Gonzalez has reason for grief in her own personal life, having recently come to the end of a twelve year long marriage. As she has remarked, grieving plus (synth) pop creates an interesting character: a diva who is a professional mourner.

Gonzalez is one of a number of synth artists recently who have pursued their craft and kept their day jobs in academe. She teaches music technology and songwriting. One of the other members of the graduate student cohort in musicology at UCLA is electronic recording artist Sarah Davachi. Gonzalez’s frequent collaborator Julia Holter, who plays synthesizer on No Sun, did her graduate work at CalArts. Their respective training has helped to make their music sophisticated while sacrificing none of the immediacy and memorability one craves in pop songcraft.

No Sun contains eight songs, a number at the usual three minute length and a few that stretch out. One clocking in at over seven minutes is “Anymore,” which has a mid-tempo pulsation throughout. Added to this is a gradual layering of voices and synthesizers, periodically moving us to double time percussion and then back to the medium groove and from a lilting vocal melody to walls of complex backing vocals. Synths send the harmony sidewise while a bass line is evasive in its punctuations. Partway through it deconstructs down to the solo vocal a cappella before rebuilding the layers with the voice slowly receding into the rest of the arrangement, making the isolation of its lyrics explicit, and then once more dropping everything but the voice, making aloneness even more overt.

“No Escape” plays with different types of bass-lines and kaleidoscopic synthesizers. The song is propelled by Cory Fogel’s percussion. Gonzalez’s double-tracked vocals evince particular passion here. “This Time” features an honest to goodness extended solo section as an outro, with Corey Lee Granit laying down squalling guitar riffs.Here, as elsewhere, Nite Jewel is unafraid to lean in and encourage arrangements that reassemble past tropes of pop. Fogel guests again on “Show Me What You’re Made Of,” as does Julia Holter, who contributes additional synthesizers. Supple voice, corruscated bass and drums, and slowly articulated synth chords all move at different rates, making a polyphonic rhythmic scheme that grooves but requires more than just head bobbing to express. In a hat tip to the album title, Gonzalez covers Sun Ra’s “When There is No Sun,” in a six-minute version that combines electric piano sounds, grainy bass, and soulful singing: a most successful interpretation.

Those aforementioned three-minute songs are imaginative, tuneful, and expressive. “Before I Go” allows Gonzalez to play with space in the arrangement, into which she pours singing of a more bluesy cast than elsewhere.  Brian Allen Simon supplies saxophones on “#14,” with undulating melodies reminiscent of Branford Marsalis’s playing on “The Dream of the Blue Turtles.” “To Feel It” has an angular yet catchy vocal melody, a disco chord progression rife with ninth chords, and a syncopated electronic rhythm section. If there is a breakout song among those on No Sun, this is it. One hopes it will vaunt all the attractive material arrayed here to greater attention.