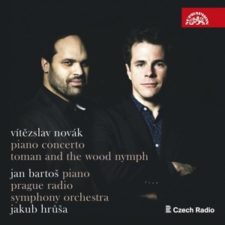 Vítěslav Novák’s Piano Concerto is a melodious early work, part Liszt and (in the finale) part Dvořák, but none the worse for that. Like just about everything this composer wrote, it displays a certain soulful melancholy which, combined with the very effectively written solo part, makes for very enjoyable listening. Composed at the same time as Suk’s early works, it reveals the post-Dvořák generation of Czech composers slowly freeing itself from its Brahmsian roots. Jan Bartoš clearly believes in the music, and delivers an expressive, flowing performance, ably accompanied by Hruša and the Prague Radio Symphony Orchestra. The music’s virtuoso demands clearly don’t faze him, and Supraphon’s engineers give the artists warm, well-balanced sonics. The result is a wholly winning addition to the concerto repertoire.

Toman and the Wood Nymph is one of a number of symphonic poems on the same basic subject–a man possessed by a destructive feminine nature spirit–also explored by composers as diverse as Fibich, Sibelius, and Bax. Even Bartók’s opera Bluebeard’s Castle covers much the same territory: the fight over dominance between male and female natures. Novák’s take on this age-old tale is one of the most expansive (25 minutes), orchestrally intricate, and musically effective. I’ve described his later music as “Delius with rhythm,” and that description applies to this music above all. The work has been recorded numerous times, but this newcomer is as effective as any of the competition, and it makes an apt pairing to the concerto as evidence of Novák’s evolving musical language. In short, this is a very enjoyable release.