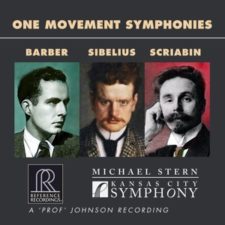 This latest release from Michael Stern and the Kansas City Symphony reveals typically enterprising programming: three one-movement symphonies in widely divergent styles, ranging from Barber’s neo-romanticism, to the very personal austerity of late Sibelius, to the lush decadence of Scriabin’s Poem of Ecstasy. Let’s get right to the point: the Sibelius is a dud, a performance singularly lacking in firmness of outline, rhythmic point, and that sense of organic growth and flow that the music must have. Mind you, the playing as such is never actually bad, nor does Stern fail to observe the composer’s markings in the main, but the result is just dull.

The other two works, on the other hand, come off very well. Barber’s First Symphony has received numerous fine recordings, starting with Bruno Walter’s mono versions, and this one is no exception. Its compact form, attractive tunes, and the composer’s clear development of them, almost always come across effectively, as they do here. Scriabin’s Poem of Ecstasy, technically his Symphony No. 4, couldn’t be more out of fashion these days, so it’s great to see it given this exciting and opulent new recording, captured in Reference Recording’s typically resplendent sonics. Stern’s performance is big on clarity, with the climaxes carefully gauged so that the big one at the end really is the big one at the end. Overall, the performance resembles the Maazel/Cleveland on Decca, which is probably my personal favorite, so I can’t offer higher praise than that.

In considering this recording as a whole, I’m reminded of Tom Colicchio’s frequent advice on Top Chef: if you’re going to present scallops three ways, chances are one of those ways will go wrong, so it’s much smarter to do it just one way but do it perfectly. I wish the Sibelius had been great, but for the Barber and above all, the Scriabin, this is a very fine release.

Album Title: ONE MOVEMENT SYMPHONIES
Reference Recording: None for this coupling