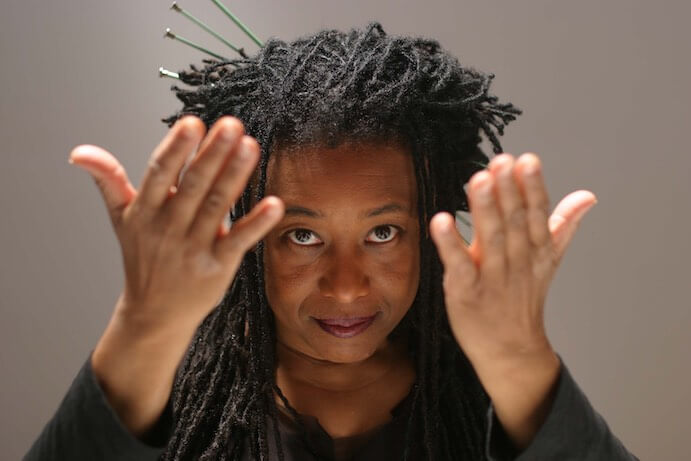 Pamela Z is as wise, cultured, and artistic as she looks — and at the same time, is more than what meets the eye. She is the personification of eclectic style and sound. She is an innovator who has made her mark as an artist, especially in the realm of sonic expression. If one had to define her living work, she would exist as a composer, performer, and media artist who focuses heavily on the voice. What is intriguing about her work with the voice is the way she manipulates and reverberates it through sampled sounds, electronic processing, and video. As a pioneer in the live digital looping space, Z creates these complex sonic layers that are chaotically cohesive, leaving audiences in awe. Much of this comes through in her new project A Secret Code — her third album in her decades-long career.

Born in Buffalo, New York in the ’50s, and raised in the Denver Metro area, Z’s career began at the University of Colorado at Boulder where she studied classical voice and earned a Bachelor’s degree in music. Into the later parts of the ’70s, Z set her sights on intentionally putting her own voice, songs, and compositions into the world under the name Pam Brooks. In this space, she experimented with digital delay and reverb as a way to play with her voice. It wasn’t until the early ’80s that she began pairing live looping with this new process, which birthed what we know of her work today. Her modern-day setup looks something like being on stage or in the studio with a MacBook Pro, MAX MSP, Isadora software, and complex custom MIDI controllers that allow for the manipulation of sound and image with her own body. Z has brought this setup along with her while she’s toured throughout the US, Europe, and Japan. Along the way, she has won awards that include the Rome Prize, United States Artists, the Guggenheim, Doris Duke Artist Impact Award, Robert Rauschenberg Foundation, and the Herb Alpert Award. A decorated artist like Z has so many accomplishments they can’t all be listed here. However, her latest project with Neuma Records is an abstract masterpiece with a truly unique spotlight of its own.

Presented as a gift to its listeners, A Secret Code is a collection of Z’s past performances and expressions. Some are compositions created for choreographers, and others are excerpts from intermedia works; tracks such as Quatre Couches/ Flare Stains are a combination of two works, Quatre Couches (2015) and Flare Stains (2010). As it begins, Z’s voice reflects like light on a white wall as she counts starting from one to an eventually inaudible number. This repeats as the same vocal layers are stacked and dispersed to create delay and reverberation. As the vocals lie on top of each other, she begins reciting the same numbers, which begin sounding like a soundcheck in Japanese and other languages, all of which come together like a reimagined Morse Code. In combination, the sounds are on the precipice of sensory overload. However, Z manages to toe this line masterfully, creating an expression of her own.

The track that follows plays more like a mantra, a reminder to check-in and reflect on the baggage one is carrying and the comforts one needs in order to feel safe and secure while en route to a new destination, whether that be metaphorically or literally. The message appears to be similar to that of Erykah Badu’s Bag Lady. What’s intriguing about “Unknown Person” (from Baggage Allowance) is that Z’s voice isn’t the only one present. As the track progresses, the voices of unknown international travelers respond to a question, unheard by the audience, at the airport check-in post 9/11. The thing about A Secret Code is that rhythms cycle and repeat, but if you approach this album expecting a traditional electronic commercial album, then that is not what you will get. It’s better to approach this without expectation and open yourself up to whatever may come through while listening and observing. Tracks such as “Declaratives in the First Person” (from Timepiece Triptych) sound like a matrix. Z repeats, “I would like to think that the art itself is enough of a statement.” Parts of this phrase  skip, jolt, and phase, mimicking a broken record or a faulty system. Her voice is the only instrument within this track, but it is enough.

Other tracks such as Typewriter and “Syrinx” (from Timepiece Triptych) use the sound of objects and environments in the production. “Syrinx” in particular highlights a variety of bird calls. One could argue that birds have their own secret code. This track sounds like an examination of that fact, with Z mimicking the melodies of finches and wrens throughout. From popping bubble wrap to bird calls to typewriters and audio taken from international travelers, A Secret Code is as intentional as it is esoteric. Each track is an amalgamation of compositions created in the past, some reimagined, others brought to life again before our very ears.