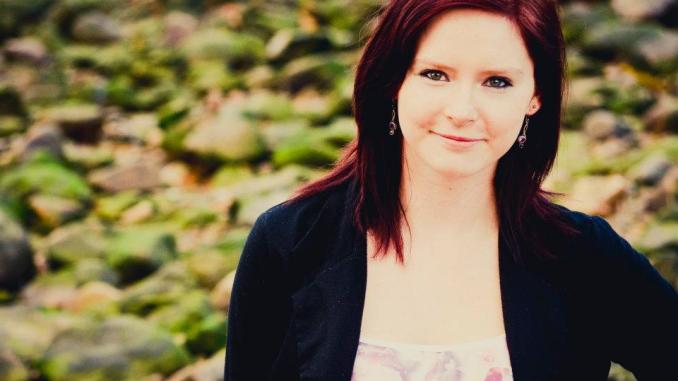 Just so you know, this story includes music that confronts violence against women. If you or anyone you know needs help, visit respect.gov.au for a list of national and state-based resources.

Welcome to Passing the Mic, a new series centring the art of Australian female, non-binary, and gender-diverse composers.

This series appreciates composers as entire artists in and of themselves, whose work may be influenced by their gender, but also by countless other sources of inspiration.

Each instalment, we’ll be interviewing a composer, and curating a playlist featuring their work and the work of other Australian female, non-binary, and gender-diverse composers.

For our inaugural interview, we feature the inimitable Samantha Wolf. As a composer and sound artist, Samantha Wolf has a diverse body of work, much of which has been performed across Australia and internationally.

Like many, I was first introduced to Samantha’s work through her compelling and confronting The More I Think About It, The Bigger It Gets, written in 2016 for This Will Be Our Reply, a fundraising concert in support of the Safe Steps Family Violence Response Centre. It’s an incredibly powerful work for flute, violin, cello, and tape, its most notable feature the constant ostinato of a woman’s recorded footsteps. Adding to the gravity of the work are soundbites from prominent figures, illustrating the often misogynistic political discourse around violence against women and the role of women in society.

With Australia in the midst of a social reckoning with its own culture of gendered violence, I’ve decided to feature this work of Samantha’s in this playlist along with other works about misogyny, violence against women, and the experiences of marginalised genders.

Read our interview with composer Samantha Wolf, then listen to Lily’s first curated playlist below.

Samantha, this month’s playlist features your confronting work The More I Think About It, The Bigger It Gets. Was your intention with the piece to start a broader conversation about violence against women, or did that come about as a result of exploring different sound media?

The More I Think had very prosaic beginnings as an assignment for Dr Linda Kouvaras’s sound art class at the University of Melbourne. Although the piece is clearly concerned with the discourse around women’s safety and freedom, I never really expected anybody else to ever hear it, so I had no expectation that it would kickstart any broader conversation.

The way I see it is that the conversation was already happening, and the piece foregrounds certain elements and threads that keep popping up. That said, the piece uses soundbites from that very conversation as its raw material, so the sound and the content of the piece are very much intertwined; it is absolutely meant to affect the listener and elicit some kind of visceral reaction.

Australia is experiencing its own societal reckoning with gendered violence and inequality, with these issues at the forefront of the national consciousness now many years after you first wrote your work. Do you feel much has changed since 2016? Has the work has maintained its relevance over time?

I would be thrilled if I woke up one day to find that this piece was completely irrelevant. Sadly, recent events show that we’re a long way off from that.

On one hand, I’m encouraged by the brave people who’ve spoken out, and the increasing nuance in most media reporting. On the other hand, there’s so much more we could be doing in policy and funding, and the mishandling of the situation by the current administration is inexcusable.

It really does feel as though the more things change, the more things stay the same. And it will likely stay that way until perpetrators, and those who protect them, are held to account.

Do you have any advice for other composers or performers wanting to tackle these issues in a similarly effective way?

My main advice would be to make sure that you have a solid support network around you, as working directly with this kind of subject matter can take an emotional toll. This is true of any medium, but especially composing, which can already be quite isolating.

I had a lot of personal stuff to work through as I put The More I Think together, and being able to bounce ideas around, vent, or cry with somebody close to me was incredibly helpful.

These ideas remind us of the power of music. Despite the challenges in confronting these topics, what’s something you love about being a composer?

I love being able to amplify a performer’s weirdness.

Really like this squeaky sound you accidentally discovered one day? Let’s figure out the notation for it. Got some spare kitchen objects lying around? Let’s use them. Existential dread? Same, let’s write about it!

The best projects are the ones where my weirdness overlaps with the performers’ weirdness and sound falls out.

Now, you have some big news to share: you were recently accepted to study a Masters at Yale! Obviously, the past year hasn’t gone to plan for anyone – musicians especially. But we’d love to hear about your experience so far.

Thank you! I’ve been studying here since 2019, but I’ll be starting the third year M.M.A program in September. The first semester, pre-COVID-19, flew by in a crazy, concert-filled, stressful, exciting, caffeinated blur; since then, it’s been up and down, to say the least.

There is so much to be grateful for here: amazingly supportive teachers, engaging classes, health insurance! But it’s difficult to come to terms with the full scale of the loss that myself and my musical colleagues are facing, whether in school or not.

I love working directly with musicians, and no amount of Zoom rehearsals or virtual concerts will ever replace the chance meetings and post-concert chats that plant the seeds of new collaborations.

The fact that I left all my family and friends behind to take this once-in-a-lifetime opportunity, only to spend most of my time in my room, is a tough pill to swallow; even tougher when returning home is all but impossible. But I’m luckier than most, and I’m trying hard to savour the small joys when they surface.

Before we go, tell us one of your favourite pieces by an Australian female or gender-diverse composer!

I adore Alexis Weaver’s work, especially 3 Miniatures for Headphones; it’s like tapas for your ears!

Samantha Wolf: The More I Think About It, The Bigger It Gets for flute, cello, violin and tape (2016)

Gabrielle Cadenhead: She Stands for voice and electronics (2017)

May Lyon: On the Inside for flute, clarinet, cello and piano (2016). Commissioned by Samantha Wolf for the 2016 This Will Be Our Reply fundraising concert.

Lisa Cheney: When We Speak for cello and electroacoustic track (2016). Commissioned by Samantha Wolf for the 2016 This Will Be Our Reply fundraising concert.

Marlene Claudine Radice and ALPHAMALE: Something to Burn for viola, electronics, voices and loop station (2016)

Shout the writer a cuppa?

If you like, you can say thanks to Lily for volunteering her time for Australian arts journalism during COVID. No amount too much or little, and any amount appreciated 🙂

Pay what you like securely via PayPal, 80% goes to our writer and 20% to our volunteer editor.