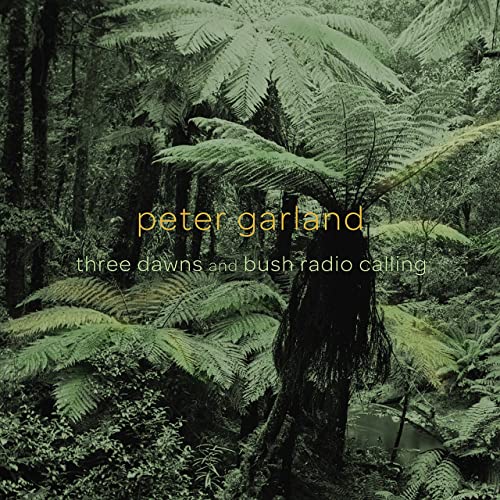 A new CD of solo piano music by Peter Garland has been released on the Cold Blue Music label. Two pieces comprise the album: Three Dawns, inspired by the poetry of Jean-Joseph Rabéarivelo and Bush Radio Calling, written specifically for avant-garde theater with a total of nine movements. Peter Garland is a well-known composer with deep roots in contemporary music from long association with important influences such as Lou Harrison, Harold Budd, James Tenney and Conlon Nancarrow. The performer for this album is Ron Squibbs, pianist, academic and a leading authority on the music of Iannis Xenakis. This latest album takes us on an exotic journey of the Southern Hemisphere via Garland’s extraordinary musical inspirations.

Three Dawns (1981-82) is a three-movement piece built around material contained in The Negritude Poets: An Anthology of Translations from the French. This was edited by Ellen Conroy Kennedy and describes the work of Malagasy poet Jean-Joseph Rabéarivelo. The beginning of “Movement 1” is brightly phrased with a series of halting passages that propel it along with a comfortable, ambling gait. A nice groove develops and a strong bass line provides a solid foundation. At just 2:49, this short opening movement with sunny harmonies and a relaxed feel is like taking a quiet stroll on a summer’s day in Madagascar.

“Movement 2” is more than twice as long as both outer movements combined and begins with a solitary string of notes in the lower registers. There is a solemn, contemplative feel to this as a warm melody enters from above. The harmony lightens and the sense of optimism builds, like the sun rising on an empty beach. The repeating theme in the bass line provides a sure foundation, anchoring the agreeable phrases heard in the upper registers. This is lovely music – thoughtful but not too precious – and yet beautifully quiet and serene. A da capo towards the finish reprises the opening, completing the circle. “Movement 3” is the bookend to the first movement, with a strong bass line and choppy rhythms in the upper register. The same optimistic feelings are evident as this rocks gently to a close. Three Dawns is the perfect musical escape to tropical solace and tranquility.

The second piece on the CD is the nine movement Bush Radio Calling, a 1992 composition written in Island Bay, New Zealand. This music was composed for a play titled Just Them Walking produced by the Red Mole experimental theater company. The play describes the fanciful journey of a citizen militia called by Bush Radio to escape civil unrest by fleeing to the Remote Experience Zone on the far side of the Bridge to Nowhere. The play is a series of unlikely adventures populated by colorful characters who are confronted with a series of bizarre situations. After completing the score, Garland went on tour as the pianist with the Red Mole company.

The first movement is “Ringatu (Variations on a Chord by Dane Rudhyar) for Alan Brunton”. This evokes an exotic and dramatic setting with a series of strong, chime-like chords. The phrases are simple, repeating with slight variations in the harmony. The pattern also includes asymmetrical rhythms and changing dynamics. There is no melody to distract from the variations in the chord with each phrase, and this succeeds in packing a lot of expression into a minimum of musical materials. Movements 2 and 3, “ Visions of El Niño Doctor” and “ Visions of El Niño Cieguito”, respectively, are short and direct, consisting of a series of strong chords with brief silences in between. There is a vaguely Latin feel to this that adds to the overall exotic character. “ Visions of El Niño Cieguito” is alternately robust and subdued in the dynamics and a bit more introspective.

The fourth movement “La Princesa (Wanganui Waltz) for Sally Rodwell” proceeds in halting, broken rhythms consisting of moderate chords that recall the “El Niño” movements. Wanganui is the name of a river in New Zealand that is invoked in the plot as the characters continue their journey by riverboat and the music here has a sense of subdued grandeur. Movement 5, “The Bellbird’s Song”, adds more color to the drama of the river passage and opens with a string of single notes in a high register with two pitches in a chattering, birdlike rhythm. The phrases repeat like a bird call but with slightly halting rhythms. New chords fill in around the bird call that are very simple at first but then a deep bass line is heard that adds a sense of majesty. A regal sound with deep, full chords ends this short movement.

The title of the fifth movement, “Hiruharama”, is the Maori name for Jerusalem. The riverboat travelers on the Wanganui hope to find Mother Aubert’s secret herbal remedies in what is only one of the many intriguing plot twists. Four chords open this, followed by a brief silence. The chords, with slight variations in the harmony, repeat in groups of two, three or four. Elegant and mysterious, there is again an exotic and regal feel. As the movement proceeds, the sequence of strong chords is followed by a single pianissimo chord in a high register, as if in a metaphorical dialogue of truth to power. At the finish, a series of soft, two-note chords is heard alone – truth has prevailed.

Movement 7 features a reappearance of disjointed rhythms and bold, dynamic chords. The piano playing by Ron Squibbs here, and in all the movements, is technically exceptional and yet infused with human emotion that makes this music very listenable. Movement 8, “The Wedding (The Bride Shoots the Batchelor. Even.)”, is a complex rhythmic structure that never quite gets started or develops into a groove, but the phrases are engaging and keeps the piece moving forward. The final movement, “Bridge to Nowhere” features bright chords heard in the higher registers and there is a sunny, optimistic feeling. The phrases seem to repeat with slight variations, adding a bit of an alien feel that is both mysterious and open-ended. The “Bridge to Nowhere” is full of luminous promise, but ultimately lives up to its name. Bush Radio Calling is an inventive and curiously singular piece, packing a lot of energy and emotion into just a piano score. Peter Garland has masterfully created a strange and romantic musical world that compliments the action of the play and brings the listener along for the journey.

Three Dawns and Bush Radio Calling is available directly from Cold Blue Records (CB0059) as well as by digital download from Amazon. Cold Blue Music is also distributed by North American retailers of Naxos and by other retail distributors internationally.