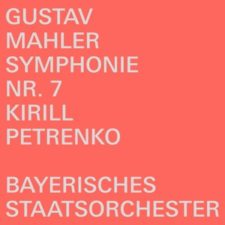 When Pierre Boulez released his glacial evisceration of Mahler’s Seventh Symphony on DG, I found it eerily fascinating, if not necessarily convincing. It had two things going for it, though. First, there was the razor-sharp and clear playing of the Cleveland Orchestra, and second, there was Boulez’ own fundamental intelligence and musical understanding of the Mahlerian idiom–at least those elements of it, so strong in the Seventh, that foreshadowed future developments. Petrenko enjoys no such advantages.

For sure, he has the orchestra playing beautifully for him, especially given a performance in front of an audience (I hesitate to call it “live”), but his interpretive approach sounds completely detached from the work itself. The result is as coldly alienated a version as we might never wish to hear. Consider the “moonlit” central episode in the first movement, its lyrical climax. Petrenko rushes through it mechanically, dully, and completely inexpressively. Indeed, from this point on he seems to lose interest in the music entirely, concerned only with getting through it as quickly as possible. The two Nachtmusik movements are simply horrible: the first completely lacking in atmosphere, mercilessly driven, the second senselessly robbed of all sentiment. The music never smiles, never charms.

The central scherzo benefits from Petrenko’s decision to highlight some of its more slithery secondary voices, but why does he refuse to accelerate at the central climax as Mahler demands, and where is the outrageous vulgarity in the lower brass? Indeed, none of the work’s climaxes have any impact thanks to Petrenko’s “paint by numbers” approach to emphasizing select parts (which may or may not be the ones that matter) at the expense of all of the others. At no point does the orchestra coalesce into a full ensemble. It’s just a random assortment of odd plinks, moans, and grunts, as if he’d taken a highlighter to the score at random and underlined a few measures here, some others there, musical continuity be damned.

Not surprisingly, the finale survives this vivisection best. Its patchwork collage of episodes and celebration of the ordinary defies even Petrenko’s efforts to turn it into anything other than what it is, but he still tries mighty hard, choosing some very strange tempos and favoring lopsided balances all the same. The main problem with this kind of mindlessly micromanaged approach is obvious: there’s far more detail in the score than even the most obsessive podium fanatic will ever realize, especially if he shows little interest is such trivial issues as the long melodic line, formal coherence, and (God forbid!) expressive intensity.

The deluxe packaging does its very best to celebrate this farrago of nonsense, while the sonics favor the (excellent) woodwinds and strings at the expense of the brass and percussion. Petrenko is one of those narcissistic “artistes” who disdains recordings, thereby cleverly ensuring that whatever he does gets extra scrutiny; but like all such poseurs, at least on evidence here, his much ballyhooed “principles” serve only to conceal an empty suit. What use is talent or virtuosity for its own sake, unallied to musical intelligence or emotional sympathy? Here is your answer.