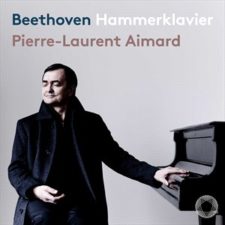 Having heard Pierre-Laurent Aimard give several intense and impassioned live performances of Beethoven’s Hammerklavier sonata over the past several seasons, his studio recording generally seems reserved and even foursquare by comparison.

To be certain, his exemplary technique allows for no vagaries of voice leading or textural misfires, while Pentatone’s production values do justice to Aimard’s tonal clarity and transparency at quieter dynamic levels. Still, there’s a pre-planned quality about nearly every breath pause, tenuto, caesura, and dynamic hairpin that somewhat dissipates the outer movements’ continuity and momentum. This is not a function of Aimard’s generally conservative tempos, although the fugal finale becomes heavier and less timbrally alluring as the music unfolds (this is true about most performances, to be fair).

Interestingly, in concert Aimard’s outer movements went for broke, while the Adagio sostenuto came off sounding relatively reserved and reticent. Here, however, Aimard’s expressive palette opens up, with a controlled freedom to the rubatos that culminates in a devastating climax. In the rising chain of broken fifths and sixths between hands just before the first-movement recapitulation (measures 224-226), Aimard reads the lower note upbeat as A-natural, rather than the so-called “inspired misprint” A-sharp, vis-à-vis Kempff, Petri, Brendel, and Perahia; I personally prefer A-sharp, as do Schnabel, Solomon, Arrau, and Levit.

Years ago during a public master class I heard Aimard spontaneously launch into a most inspired and unified reading of Beethoven’s 32 Variations in C minor. Similar inspiration and unity abound throughout his Eroica Variations, with more than a few audacious touches.

I like the force of his right-hand triplets in Variation 2, buttoned by brash left-hand accents at phrase endings, as much as No. 5’s ruminative delicacy. In No. 6, Aimard’s suave, effortlessly dispatched broken octaves enable the offbeat accents their due without pressing the point. All the more surprising that No. 13’s triplet chords and witty melodic appogiaturas don’t match the insouciant thrust one hears from Clifford Curzon. Yet the concluding Fugue has the variety of character and articulation that I expected to encounter more consistently throughout Aimard’s Hammerklavier Fugue.

Perhaps I expected more from Aimard’s Op. 106, but his Eroica Variations easily takes place next to my favorite versions, including Curzon, Martino Tirimo, and Emanuel Ax’s Sony remake, along with an underrated sleeper from Cyprien Katsaris, if you can find it.