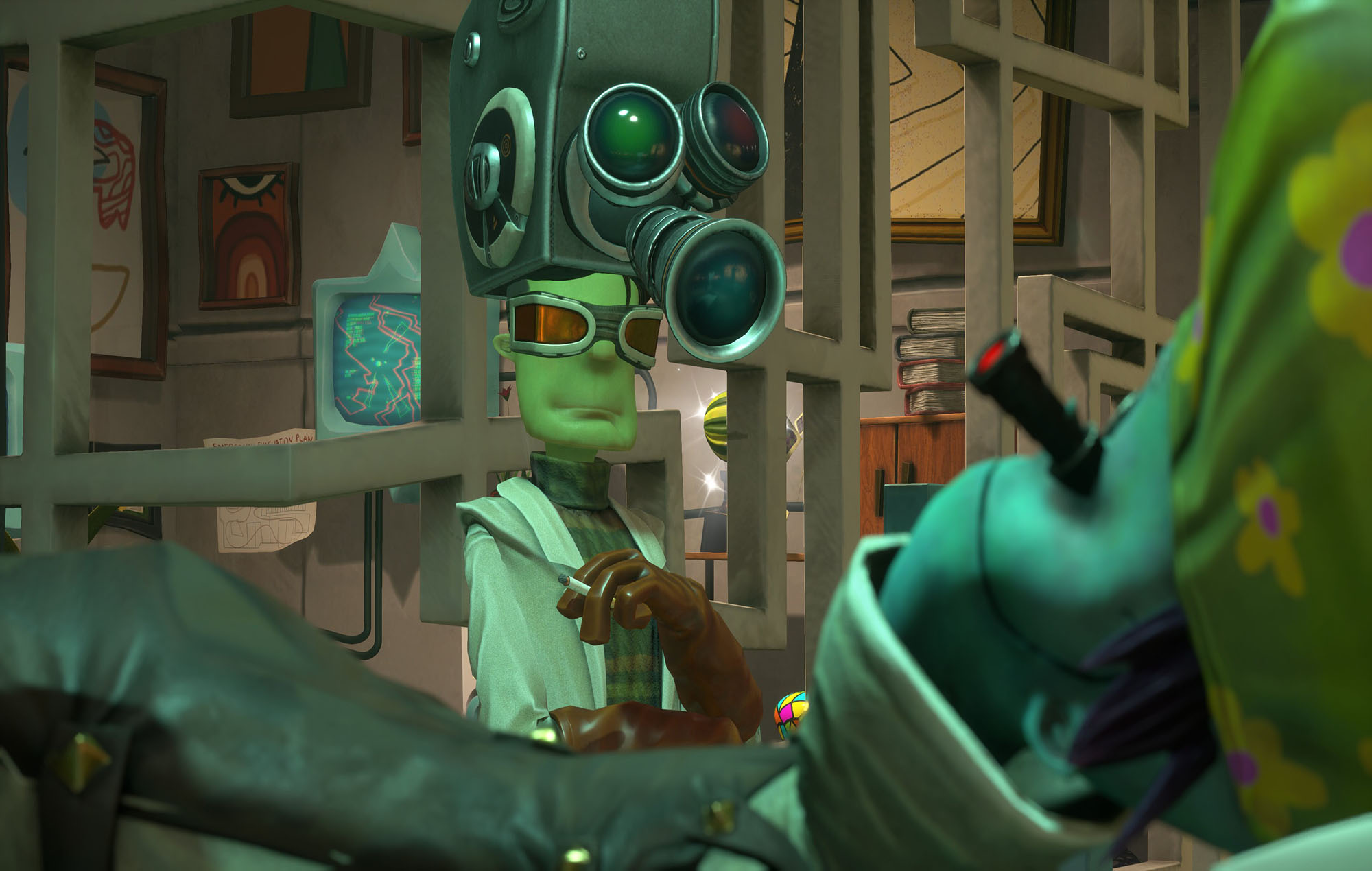 “Isn’t a seed just a bomb in slow motion?” is one of many lines from Psychonauts 2 that I’m still thinking about, days after beating it. It’s said to the protagonist, Razputin Aquato, as he explores the mental world of a lonely gardener. In reality, the gardener lives alone in a tower besieged by gnarled plants. In his mind, he’s trapped on a barren island in an ocean of memories.

It sounds like a silly aside, but in context, it cuts deep. As Raz floats between the cays on a drifting door, corked bottles start to surface, containing dioramas of difficult moments from the gardener’s past. Deep within these glass prisons are painful truths, warped and exaggerated by years of isolation and grief. But deep down, Raz also finds glowing seeds.

Raz can take the seeds back to the island and plant them to grow healthier memories for the gardener. But understandably, the gardener is hesitant to let you take them. He’s happy with his garden the way it is, and new memories just mean more potential anguish. “They always start out little, don’t they,” he says, talking about another seed. “But then they grow and grow, and cause so much pain”. It’s your job to show him that there can be another way.

This is the premise behind one of the most creative and moving missions in Psychonauts 2, a modern 3D platformer brimming with imagination and empathy. The opening description could easily make you think that this is a dark game, and while it does deal with plenty of complex mental health topics, it’s good to note that there’s always a throughline of hope and healing here, with plenty of humour to boot. It’s like a playable Pixar film with eclectic art direction. Young kids will undoubtedly get a lot out of it, but they might return a few decades later and connect with it even more.

Psychonauts 2 is also the long-awaited sequel to Psychonauts, a cult classic that came to the Xbox in 2005. Like the original, the sequel is a puzzle platformer set primarily in the collective unconscious. Not much has changed about the gameplay setup, but the questions it wants to ask are far more resonant sixteen years later. If we could put a little door on your forehead and look inside, what would we see? Could we understand each other better and maybe use what we find to heal?

We interpret all of these questions through Raz, a ten-year-old kid whose only goal is to become a bonafide member of the Psychonauts, a group of secret agents who keep the peace by investigating the insides of people’s minds. Played with utmost charm by Richard Horvitz, Raz’s sensational view of the Psychonauts clashes with the organisation’s woeful straits. Having saved the world in the original, he arrives at the Psychonauts’ flash secret headquarters only to be shoved into the intern program and lectured about a dangerous mole. The plucky underdog is left to solve another conspiracy, complemented by old friends and some new cast members voiced by top talents like Elijah Wood and Jack Black. Tim Schafer’s dialogue is typically fantastic throughout, tinged with humour and wit at every turn.

It’s a more cohesive and pithy tale this time around, digging into the psychic-hating circus family that Raz left behind and the murky history of the Psychonauts organisation and its founders. Double Fine has consulted mental health experts to inform the sequel’s content, which has led the studio to ask trickier questions in Psychonauts 2. The Psychonauts can enter people’s minds and impact them… but should they? The game confronts the responsibility the Psychonauts have when they’re kneading the grey matter of another. It also engages with the Rashomon effect, exploring multiple interpretations of one defining event through many people’s minds, leading to superb storytelling, with many rewarding twists and turns.

Combat stays true to the feeling of the original, though some of its sharper edges have been sanded down. It’s a brawler by nature, but beyond Raz’s punches, you can use the shoulder buttons and triggers to set your enemies on fire, slow them down, pull them towards you and blast them into smithereens. It often gets hectic, and there’s an excellent learning curve as the game consistently introduces new enemies with specific weaknesses.

You’ve got to slow down Panic Attacks to fight them, and you need to blast Bad Ideas before they blow up in your face. My favourite enemy design is the Bad Mood, a big scribbly storm that clouds your vision. Raz has to use Clairvoyance on it to understand why it’s feeling that way so he can nullify it. The way that Psychonauts 2 realises these mental manifestations as gameplay mechanics is so charming, and it persists all the way up to the boss fights, which are big epic bouts that test your mastery of Raz’s powers.

The only thing I longed for was a solution to manage Raz’s abilities a little easier when you’re in the thick of it. There’s no weapon wheel, so to speak, so you will be pulling up a menu in battle or when you’re platforming to assign the powers you need. It can be a little frustrating, especially when you want to expose weaknesses and craft a big combo. It would have been cool to have a way to switch between assigned power profiles to maintain the immersion. I also sometimes found myself cutting off lines of dialogue by mistakenly causing damage or proceeding through levels by mistake, which was a shame, but that’s also a profoundly tricky problem to solve for a narrative-heavy platformer.

Speaking of platforming, movement is excellent in Psychonauts 2, with a pleasant feeling of momentum as you bounce around on your levitating Thought Bubble and dart through the air to reach the game’s cool collectables. They’re all very rewarding to seek out: Mental Figments tell little stories, and Memory Vaults unlock repressed memories, while Half-A-Mind’s (get it!) let you boost Raz’s health bar when you squish together a set. Again, the marriage of great gameplay with imaginative concepts is what makes Psychonauts 2 such a unique thrill to play. Without a doubt, it’s unlike anything else you’ll play this year.

It took me about 15 hours to finish Psychonauts 2, and I was pretty thorough with the collectables. The good news is that once you wrap it up, there’s still a lot to do in the post-game state as you chase Rank 102 and finish the side quests. I’m currently looking for my final Scavenger Hunt items and tracking down figments in the single digits. I could easily be tempted for another playthrough, too, as I imagine it would be rewarding to experience the story again, knowing the ramifications of its final act.

Sometimes I made the mistake of thinking that a level was putting a visual idea ahead of a mental health concept, but every time I was proven wrong when the set dressing was used to thoughtfully explore a condition that I wasn’t expecting to see represented.

One mission introduces the power of archetypal projection by having you investigate a person’s personas, personified by distinct books that had been locked away by a domineering librarian in a world made of paper. It was riveting and made me ponder Sylvia Plath’s fig tree analogy, of all things. I think the great thing about the dynamic subject matter of Psychonauts 2 is that people will get very different things from each of its levels, given the sheer breadth of concepts they touch on.

I have my own mental health struggles, and one level about an anxiety-stricken fellow confronted with a clock-based cooking show particularly meant a lot to me, all the way down to a throwaway quip where the mind-owner misread the five-minute timer as five seconds. It sounds daft, but I know those feelings, and I’ve done that before, and it was just lovely to get a few giggles out of something that often pains me, alongside all of the empathy.

The ambitious ideas Double Fine execute within single levels really could be games unto themselves, so I’m going to stop myself from describing them all in detail because I don’t want to rob you of several delightful surprises. The missions reminded me of the absurd imaginative environments that were lovingly brought to life in old school adventure games in their heyday. It felt like a massive gust of fresh creative air with its irreverent theme parks and funky festivals.

It’s all elevated by a super score from LucasArts legend Peter McConnell too. He carefully remixes tracks from the original and manages to strain the striking visual identity of these eye-popping worlds into sound. You can feel how fun it must have been to craft the visual and sonic language of these thoughtful headspaces with the power of modern technology.

The way Psychonauts 2 leads with care meant that I left the experience with my heart feeling really full. I’m a huge fan of the original, so I’d be the first person to tell you if something felt off. But for a week or two, I was once again that 10-year-old kid who picked up a funny-looking game box and went on a beautiful journey.

Psychonauts 2 is available on PlayStation 4, Xbox One, Xbox Series X/S and PC. We played the PC version.

After a long sixteen years, Double Fine has delivered the ultimate sequel. Psychonauts 2 refines what made the first game good, ponders necessary questions, expands a world that was begging for a follow-up and executes a number of jaw-dropping visual ideas. It’s a proper modern 3D platformer with incredible art direction, and it’s ready to hit you with a deluge of imagination and empathy. You don’t want to miss it!