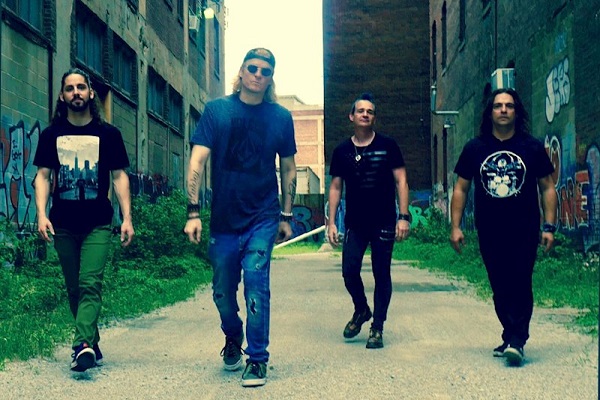 Wes Scantlin of Puddle of Mudd joins Anne Erickson to discuss the band getting back on the road, new music and more in this in-depth interview

Puddle of Mudd are back on the road following a year away due to the ongoing pandemic, and while a year away might sound like a long time, getting back on the stage feels natural for the band. Wes Scantlin and company are touring behind their latest album, “Welcome to Galvania.”

“It takes about one little jam fest, and then you can get right back on the bike and keep on rolling,” Scantlin told Audio Ink Radio about getting back on tour. “We’re playing new songs from the new album, and we’re playing as many songs as we possibly can before we keel over onstage!”

Puddle of Mudd currently have tour dates lined up through late November. Scantlin has also been working on the band’s follow-up to “Welcome to Galvania” while in quarantine.

Scantlin spoke with Anne Erickson of Audio Ink Radio about the band’s current tour, their heartfelt new single “Just Tell Me,” his longstanding relationship with Fred Durst of Limp Bizkit, new music on the way and more. Read the Puddle of Mudd interview below, listen via the YouTube player and hear it via the Audio Ink Radio show on Apple Podcasts here and Spotify here.

On the meaning behind Puddle of Mudd’s latest single, the ballad “Just Tell Me”

You fall in love with somebody, and you really don’t know who they really are, so then you’re saying, “Hey, just tell me what I have to do. I love you.” Sometimes it works out. Sometimes it doesn’t. That’s basically it. Sometimes it’s great to have an optimistic-type situation at the end of the day.

On the success of Puddle of Mudd’s recent single “Oh, Oh,” which topped the rock charts in 2020

Everybody messes up in their life. Every single person in this world that’s ever been born has messed up something, someway, somehow along the way. Basically, you have to pick yourself back up, shake off the dust and give God a high five and power on and power through. Godspeed.

On the status of a new Puddle of Mudd album

Fortunately or unfortunately, it’s a little bit of an antithetical statement, I’ve been able to pretty much write and record write and record every single day for over year. I’ve said it before, and I’ll say it again: It was a nice break, but unfortunately, it wasn’t a nice break. As a songwriter, I was very stoked to be able to just write songs and be a songwriter. It’s what I do. I write songs.

I hope very soon. It’s not going to take 10 years, that’s for sure, or else I’ll fire everybody! (Laughs) … I would believe so (by the end of the year), for sure. All the people who tried to hold me back, they’ve all been fired. They fired themselves.

On the longstanding success of Puddle of Mudd’s early hits, such as “Blurry” and “Control”

Ultimately, as a songwriter, you’re trying to reach people. You’re trying to get under their skin and reach out to them and connect with them. If you can actually attain that goal of reaching out to people you don’t even know and enlightening their life and helping them through a difficult situation, or sometimes even just a happy situation, that’s what it strive for. That’s what I write. I like to have optimism at the end of the rainbow and happiness. There is turmoil, but there’s light and success and happiness at the end of the rainbow. A lot of people have been inspired by the songs written by Puddle of Mudd, and I’m happy to have helped everybody mentally and kept them stable, including myself.

On how he got his demo tape to Fred Durst of Limp Bizkit on the Family Values Tour back in the late-1990s, which helped launch the band

I just went to that tour in Kansas City with a fake backstage pass and a demo tape, and I got backstage and gave it to Fred Durst’s security guard, and that was amazing. It’s crazy. That man (Fred Durst) is an amazing person. He totally and completely just gave me my dream and tons of other people, but at least he listened to the demo tape.

On if he keeps in touch with Fred Durst

Yeah! I reached out to him about a month ago. He’s chilling. He’s a director. He writes. He’s a b****ing musician. They’re doing shows, and it’s crazy. Check out “Budapest” or any of the other shows they’re doing. It’s a million people going crazy.

I hope I can keep touring and am definitely going to go into the studio, and record the next Puddle of Mudd record. And, basically, pray that this weird thing goes away finally and forever. Everybody should really, seriously just go and get vaccinated. Some people have this thing that I call Invincibility Syndrome Disorder. The ISD disorder. Invincibility Syndrome Disorder. People think they’re invincible and no, no, no this will never happen to me. No, no, no. And, it’s like, bam. You’re dead. You’re on the floor, and you’ve infected other people that were caring for you. All of a sudden, now they’re dead on the floor. Be responsible. And, I mean this. Be responsible. Go get vaccinated. Don’t skip the next vaccination appointment. Just get both of them. They’re very simple. I’ve done it myself, It’s right down the road from wherever the heck you actually you live at. … Seriously, just go get vaccinated, man. Don’t act like some kind of a freaking, you’re better or bigger or tougher or wherever, because a lot of people have died, man.

On his faith in God

You’ve got to keep God in first place always. He is real, and if you believe, he will give you your dreams. Just say a prayer, you get up, and when you go to bed, say a little prayer, and a lot of times when I do that, basically every night and morning, everything seems to up in a pretty dang good, doggone good spot.